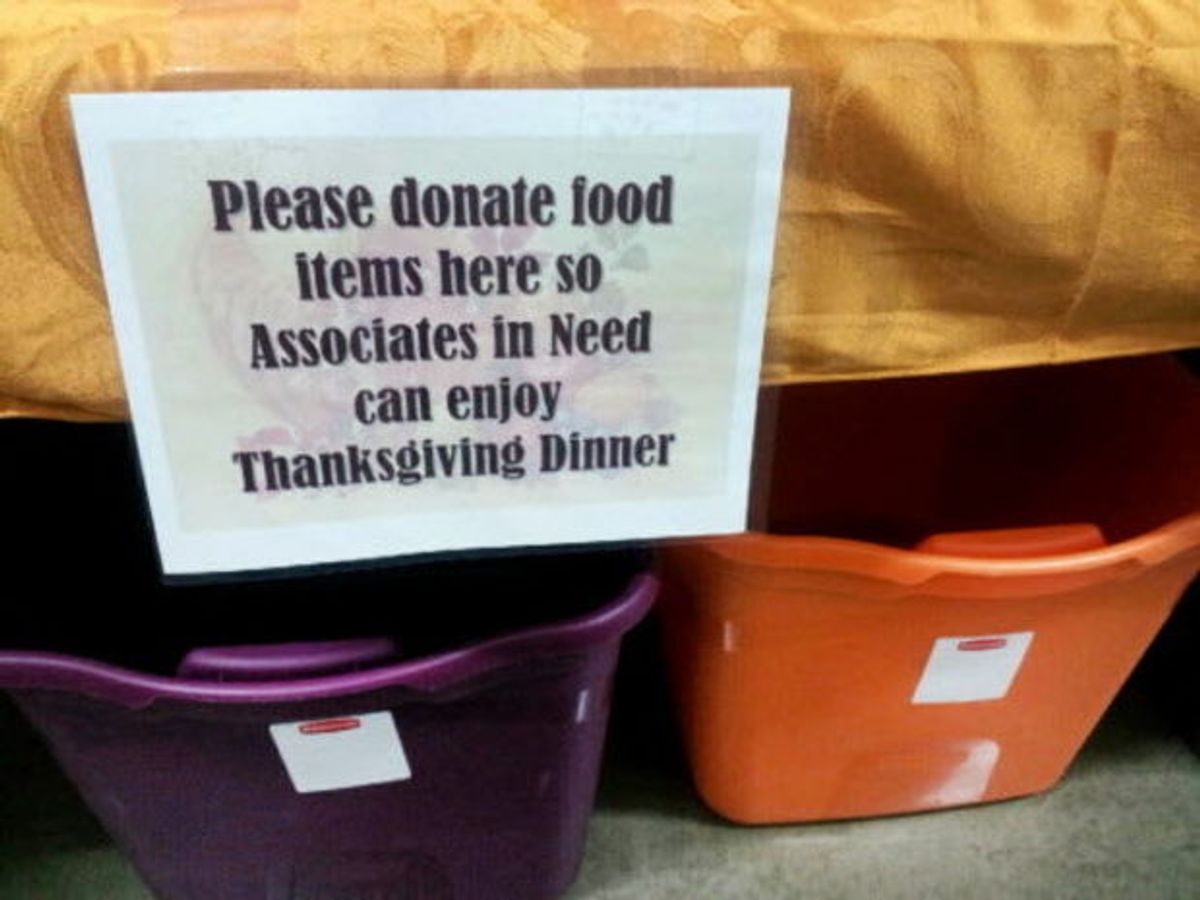 A photo showing a food drive run by and for employees at a Cleveland-area Wal-Mart has sparked outrage and intensified the ongoing debate over the large retailer's low wages.

According to a report in the Cleveland Plain Dealer, the Wal-Mart in question featured two bins in the employees-only section along with a sign that read, "Please donate food items here so associates in need can enjoy Thanksgiving dinner."

Kory Lundberg, a Wal-Mart spokesperson, defended the food drive, claiming it was a sign that Wal-Mart employees stick together. "It is for associates who have had some hardships come up," he said. "Maybe their spouse lost a job. This is part of the company's culture to rally around associates and take care of them when they face extreme hardships."

But not everyone took such a rosy view of the situation. "That captures Walmart right there," Kate Bronfenbrenner, director of labor education research at Cornell University's labor school, told the Plain Dealer. "Walmart is setting up bins because its employees don't make enough to feed themselves and their families."

More from the Plain Dealer:

Lundberg said holding the food drive at the Canton Walmart was decided at the store level. However, the effort could be considered in line with what happens company-wide. The Associates in Critical Need Trust is funded by Walmart employee contributions that can be given through payroll deduction. He said employees can receive grants up to $1,500 to address hardships they may encounter, including homelessness, serious medical illnesses and major repairs to primary vehicles. Since 2001, grants totaling $80 million have been made.

But an employee at the Canton store wasn't feeling that Walmart was looking out for her when she went to her locker more than two weeks ago and discovered the food drive containers. To her, the gesture was proof the company acknowledged many of its employees were struggling, but also proof it was not willing to substantively address their plight.

The employee said she didn't want to use her name for fear of being fired. In a dozen years working at the company, she had never seen a food drive for employees, which she described as "demoralizing" and "kind of depressing". The employee took photos of the bins, and sent them to the Organization United for Respect at Walmart, or OUR Walmart, the group of associates holding the strikes in Cincinnati and Dayton.

Vanessa Ferreira, an OUR Walmart organizer, said she "flipped out" when she first saw the photos taken by the Canton worker.

"Why would a company do that?" she said. "The company needs to stand up and give them their 40 hours and a living wage, so they don't have to worry about whether they can afford Thanksgiving."