A new view of climate change: Terrorism against the people 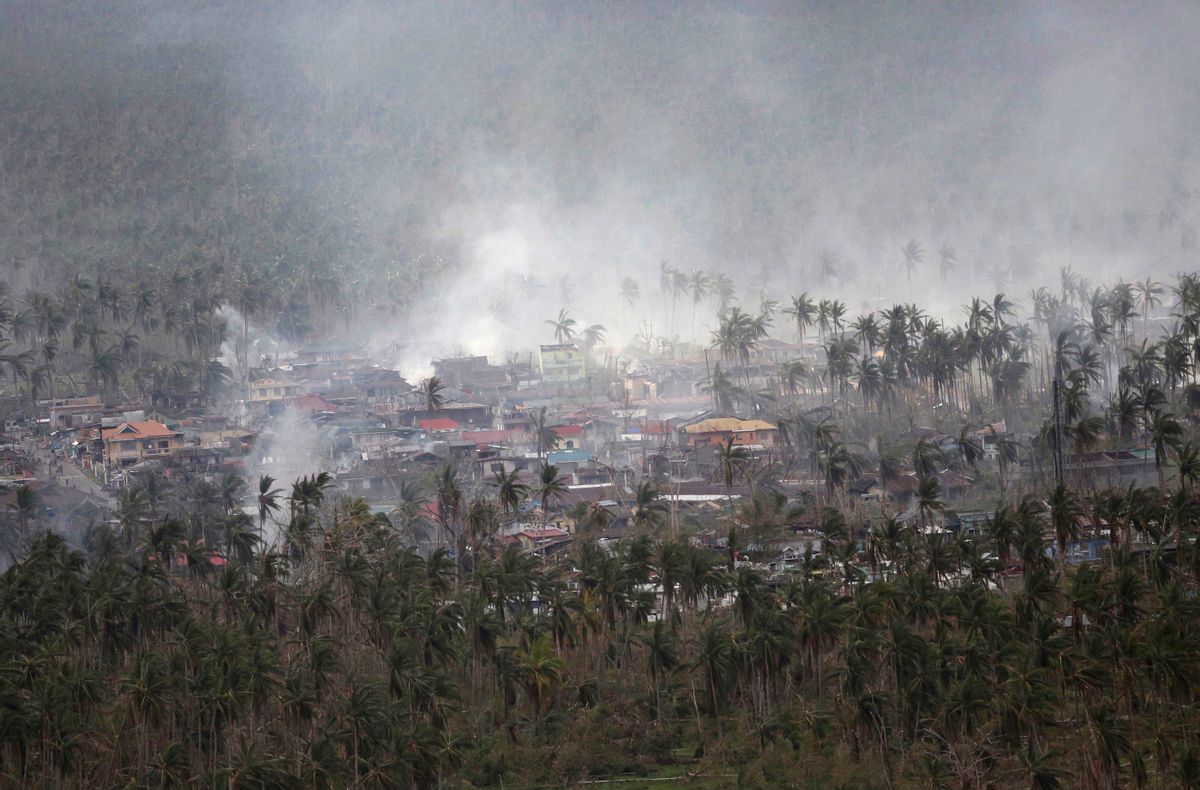 Smoke billows around damaged houses in this aerial shot from a Philippine Air Force helicopter at typhoon-ravaged Leyte province, central Philippines Monday, Nov. 18, 2013. When a newspaper for Filipino workers in New Zealand told readers how to donate to the typhoon relief effort in their homeland, it mentioned agencies like the Red Cross but not a list of government bank accounts that the Philippine Embassy had sent over. (AP Photo/Aaron Favila) (AP/Aaron Favila)
--

This article originally appeared on The Globalist. It is based on Stephan Richter’s comments during the November 15, 2013 broadcast of the Diane Rehm Show.

As part of the pivot to Asia, the U.S. government has ramped up its counterterrorism cooperation with the Philippines, Indonesia and elsewhere. This has, understandably, sparked debate there over the wisdom of increased U.S. military presence.

But the bigger question from the perspective of Filipinos, in light of the natural disaster they have just experienced, is this: Why is it that the United States still doesn’t have a domestic consensus that there is such a thing as climate change? When we talk about a global community, we at least ought to be able to start with that item at the top of the agenda.

The vantage point of Filipinos

For Filipinos and many poor people around the world, climate change, in effect, is terrorism conducted on them. And that is a far bigger threat to people’s livelihood and physical safety than all the things the United States is trying to sell them in order to have its troops’ forward positioned in the Philippines.

The United States, notwithstanding its recent rescue missions in the disaster area, hasn’t put enough emphasis on fighting climate change, despite its extensive security implications. The U.S. may have the world’s largest military, but it is this question that it will be faced with time and again. Is the world’s mightiest country going after the right issue at the top of the global pecking order?

The typhoon in the Philippines is a useful reminder that we need to think more about what can be done, both on climate mitigation and on disaster preparation.

Americans starting to lecture about doing disaster relief leaves a sour taste in other peoples’ mouth. Few outside the United States have forgotten the lack of U.S. preparedness in New Orleans.

Another instinctive reaction is to point to China. Sure, it hasn’t helped enough – and, yes, China has higher CO2 emissions than the United States, but it is the latter that is supposed to be the advanced and responsible power.

China also comes in for quick criticism that, if and when it engages, it acts in quite a self-interested manner in global infrastructure projects in places like sub-Saharan Africa.

True, but it also gets the job done. The Chinese bring in their workers and get it done quickly. Too often, when one looks at those areas, Western powers for centuries have promised to do infrastructure and they haven’t exactly delivered. So the Chinese can hold that in their favor.

But the more important point in the global context is that we need a very real debate about the constant militarization of U.S. foreign policy. That taking this approach simply “sells” better in Congress compared to more soft-power infrastructure projects certainly isn’t good enough a reason. Neither is the fact that this approach allows some folks in D.C. to pay for ever-larger villas in the suburbs.

What needs to be addressed in this context is that there are many people in the Washington establishment who have strong incentives to ensure the United States takes a more aggressive posture in the Pacific, whether through lobbying fees or pricey defense appropriations.

The return on these “investments,” while high for a few Washington insiders, is actually much lower than on building better highways and seawalls, which benefit everyone.

But while it would be a positive step for the United States to invest more in long-term development projects to aid emergency preparedness, there are other means to achieve the same ends.

Asia investing in its own future

In Asia, for example, there is the Asian Development Bank, suitably enough based in Manila, the capital of the Philippines. What better tool is there than to take out long-term loans — on behalf of all the poor countries backed by the credit rating of the ADB – so that these countries can invest in being better prepared for the next climate event?

Clearly, the West can’t do it all. We need to have more of a regionalization of these efforts. And these countries – independent of the discussion about who’s at fault for climate change – need to be prepared for their own sake.

Either way, the investment in infrastructure also makes commerce easier, allowing countries to grow their national economies and promote tourism. So it’s an investment in their own future and they need to do that.

Individual countries can’t shoulder that burden alone. The Philippines remains a very poor country. President Benigno Aquino III has been doing quite well on fighting corruption and the economy has been growing a little bit faster than in the past.

But the Philippines would probably need to have 20 years of solid economic growth before they could be adequately prepared on key emergency preparedness infrastructure in their own right.