20-year-old black cyclist was hospitalized by SFPD, after he was stopped for riding a bike on the sidewalk 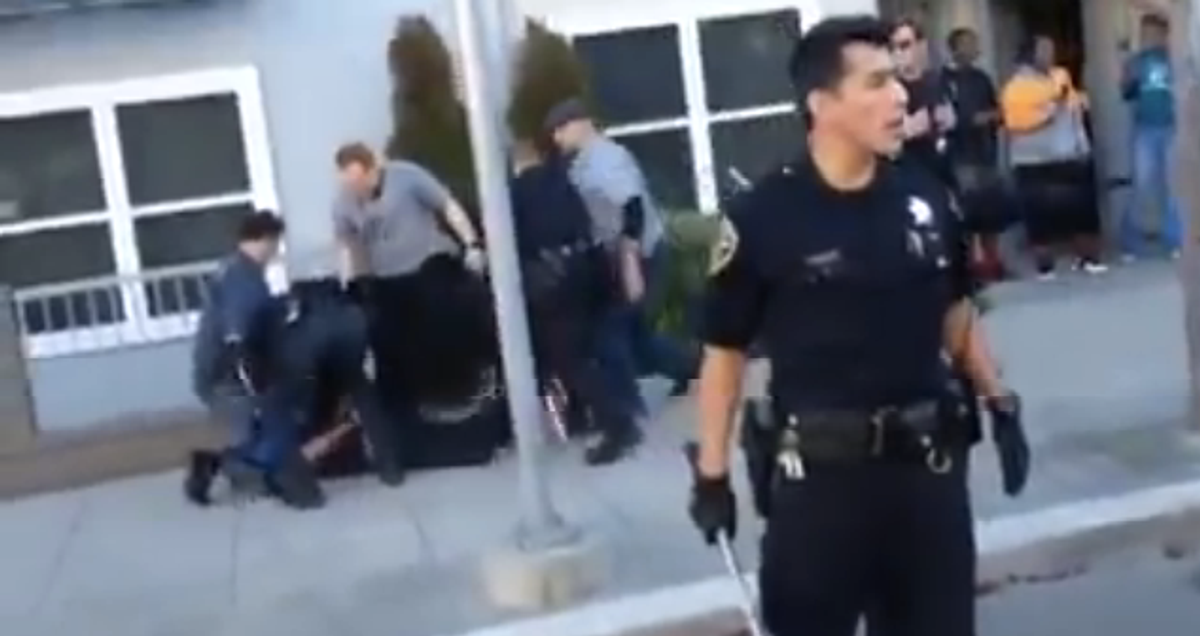 According to San Francisco local newssite, the Uptown Almanac, a black cyclist was hospitalized by a police beating after he was accosted by the SFPD for riding a bike on the sidewalk in the Valencia Gardens area. 20-year-old D'Paris Williams, a.k.a. "DJ," a City College student, was taken to S.F. General Hospital following the alleged police assault. According to the report, when police searched the young man the only items found were a cupcake and a juice box. Video uploaded to YouTube shows SFPD officers wielding batons and aggressively beating back passersby attempting to intervene in DJ's detention (see below)

Photographer Travis Jensen gave the following account to the Almanac:

Yesterday afternoon, while riding his bicycle home from the Make A Wish Foundation's "Bat Kid" happenings, DJ was confronted by two undercover police officers in an unmarked vehicle at the Valencia Gardens Apartments in the City's Mission District. Apparently, the officers said something to DJ about riding his bicycle on the sidewalk as he was pulling up to his home in the complex. It is unclear whether the officers identified themselves or not, but did proceed to get out of their car, grab DJ from behind as he was entering the home and beat him for no apparent reason. A police search uncovered a cupcake and juice that DJ had just purchased from the corner store. Nobody has spoken to DJ since the incident occurred as he was immediately taken to S.F. General Hospital for treatment, and then to the 850 Bryant police station. So far, it appears no charges have been made against DJ either. There is building video surveillance footage of DJ's confrontation w/ police, but it that has yet to be released by housing authority. Furthermore, three residents came to DJ's aid when they saw officers beating him up, only to find themselves also under attack by officers. By this time, uniformed backup had arrived on the scene. Including DJ, a total of four individuals were beaten and arrested by officers.

The SFPD released the following statement on the incident, which is suspiciously silent on injuries caused by its officers noted above and captured in the video below:

At approximately 3:41 PM Friday, officers from the Violence Reduction Team, working a plainclothes assignment attempted to stop a bicyclist in the area of Maxell and Rosa Parks for a California vehicle code infraction. The suspect fled from the officers after they identified themselves as police. The suspect attempted to flee into a residence. The officers confronted the suspect near the doorway and requested additional units for assistance. The suspect failed to comply with lawful orders from the officers and continued to resist the officers. Reasonable force was used by the officers to effect the arrest. During this incident, multiple subjects came from the rear of the residence and formed a hostile crowd around the officers. One subject attempted to strike an officer with a cane, while another suspect bit an officer. Two officers suffered non-life threatening injuries. In total, 4 suspects were arrested. 2 felony and 1 misdemeanor arrests resulted in bookings. One misdemeanor arrest resulted in a cite.