Is carrying around your own personal towel green, or just gross? 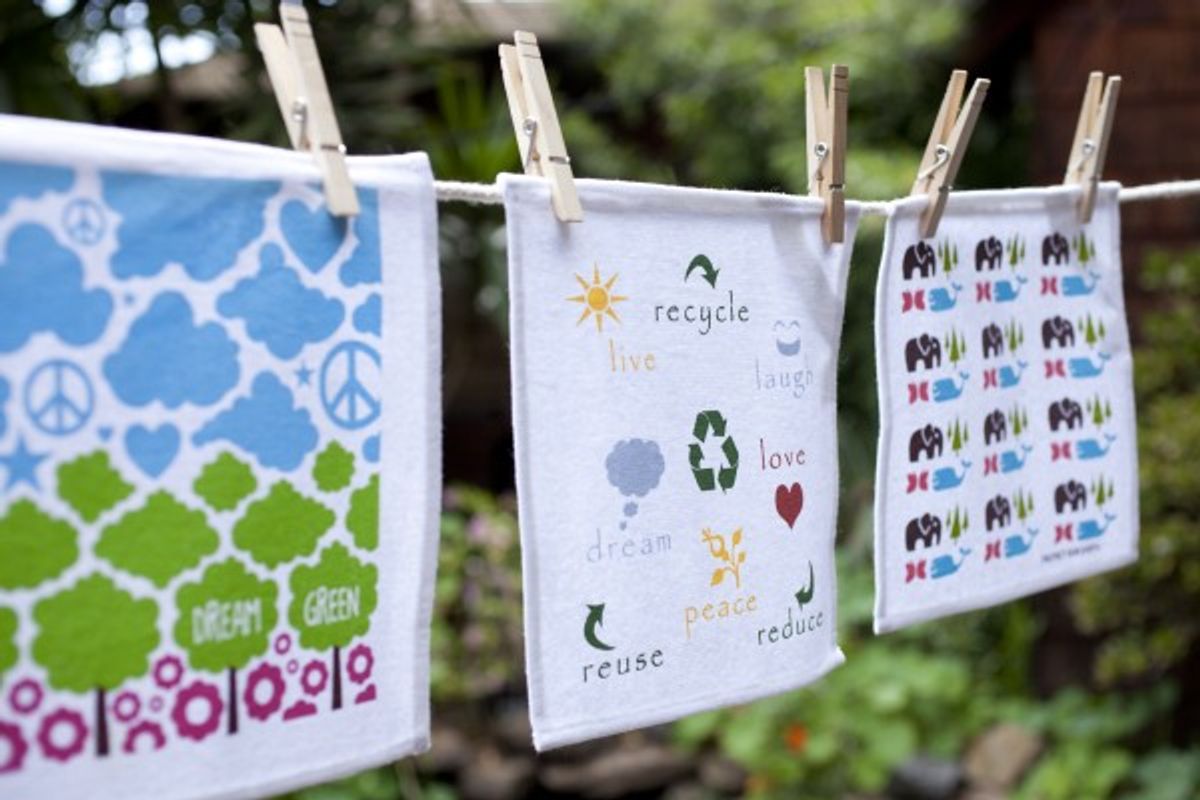 Once upon a time, I had a “blankie,” a loved, ragged thing that I insisted on carrying around with me everywhere I went. (Confession: I still have it.) It took a dedicated campaign, on my parents’ part, to stop me from bringing it to preschool. And to the dinner table, and anywhere else it could pick up dirt and grime. It was one of the earliest social mores I (reluctantly) had to learn: Carrying around a dirty rag, no matter how much comfort it provides you, is not a socially acceptable thing to do.

So it was with some defiant delight that I began using PeopleTowels: brightly colored, 9-by-9-inch squares of cloth designed for doing the very thing I was always taught not to. Folded into a small carrying bag that clips handily onto a belt or key ring, the towels go everywhere, on hand to fill in whenever the situation calls for paper towels, napkins or tissues. “This is not a tree,” one proclaims, proudly (it is, instead, composed of 100 percent organic cotton and printed with eco-friendly ink). Another, in a crafty bit of word association, implores the user to “reduce, reuse and recycle” as well as “live, laugh, love and dream.” They’re no blankie, but they’re kind of adorable, in their own, eco-friendly way. I found that I liked having them around.

Culturally ingrained habits, however, are hard to break. More often than not, I would need to dry my hands or wipe my face, only to realize that I didn’t have a PeopleTowel on me. Making it worse, paper towels are just so readily available – next to the kitchen sink at home, above the microwave and stuffed into a bathroom dispenser at work. Insidious environmental scourge that they are, it takes real work to forgo them. As convenient as a small, fast-drying personal towel may be, paper is just easier.

This isn’t the way things are in Japan, PeopleTowels co-founder Linda Lannon told me. There, a cultural ethos of taking personal responsibility for your waste prevails. While traveling in Japan, Mary Wallace, the company’s other co-founder, observed that it’s rare to see a trashcan on the street; and yet litter is equally uncommon. When people have garbage to dispose of, she discovered, they carry it with them until they get home. And to avoid creating garbage in the first place, they carry personal hand towels around with them.

I’ve never been to Japan, but numerous travel blogs confirm that this is a thing. (The Internet also confirms that Japan has an Achilles' heel: the billions of disposable chopsticks that end up in landfills each year.)

Wallace and Lannon’s mission is to bring some of that Japanese attitude to the U.S. It won’t be easy: We Americans generally don’t look kindly on people who hold onto their trash. In the most extreme cases, we make reality shows about them. The handkerchief went out of style decades ago; Kleenex tissues, napkins and paper towels – not to mention diapers, Swiffer mops and disinfectant wipes – all hint of a culture that celebrates disposability. They’re certainly cleaner: After just a few days using my PeopleTowel, I truly understand, for the first time, why my parents were so concerned about my blankie. As the stains rapidly accumulating over its colorful design attested, daily life is a messy business.

Fortunately, I have fewer attachment issues these days, so I didn’t have a problem swapping my PeopleTowel out for another and, at the end of a week, throwing all three in the laundry. All I need now is to make it a habit. But for me, and, I imagine, for most Americans, it’s going to be an uphill battle. It goes beyond just remembering to bring the towel with you every time you go to the bathroom. Instead, embracing the personal towel calls for an entire change in the definition of what we consider to be gross. Keeping a damp and slighty soiled rag on your person? Practical. Mindlessly wasting 13 billion trees’ worth of paper towels every year? We need to get to the point where we find that to be disgusting.

I’m still using paper towels: to cover my food in the microwave, to sop the grease off of my pizza and to mop up major coffee spills (which in my world happen fairly regularly). But the PeopleTowel subs in for at least half of that, provided I remember to use it.

Individually, that’s not likely to make a huge impact, but it’s the kind of thing that would get great returns for groups – if, say, an entire office stopped stocking paper towels in the bathroom and encouraged employees to BYOT. According to PeopleTowel’s calculations, if just half of the people in a 200-person company stopped using paper towels (or if they all, like me, stopped using them half of the time), in one year’s time they would save 480,000 paper towels, 28 trees and 23,000 gallons of water, while reducing their landfill waste by 2,300 pounds of landfill waste and their CO2 emissions by 5,570 pounds.

The best way to snap yourself out of your paper towel-guzzling complacency, I found, is to have a constant reminder that there’s a greener alternative. Every time I went to dry my hands, only to discover that I had forgotten to bring my PeopleTowel with me to the bathroom, I felt decidedly un-green, and much more guilty about reaching for paper than I had before.

- While it may take a small revolution to upend a cultural attitude, Lannon and Wallace subscribe to the popular theory that it takes only three weeks to make a personal habit. To prove it, they conducted a small study among employees at an unnamed eco-minded institution. Subjects reported that training themselves to use PeopleTowels was about as difficult as getting used to reusable water bottles and cloth grocery bags: challenging, but not impossible. After three weeks, more than half reported that using the towels was, indeed, becoming a personal habit – and almost everyone acknowledged that doing so made them more aware of their personal paper towel usage.

Despite their eye-catching designs, the only way I can imagine that non-ecologically minded people are going to be convinced to invest in this sort of thing is if they have no other choice. So first we need to get rid of the paper towels; as we do, products like PeopleTowels are going to become more and more appealing.

A single towel costs $6; a two-day supply with cloth carrying case costs $16. From there, significantly more money can be invested in bulk orders, custom designs and other options. Going back to that hypothetical 200-person office, PeopleTowel calculates that if five towels were purchased for each employee – a week’s supply -- a company could end up saving just under $1,000 in its first year in reduced paper towel use.

Single-use tissues and towels came into fashion for a reason, but it’s difficult to justify their environmental impact. It’s past time that a new trend catch on.