How can you study when you can't eat? The invisible problem of hunger on campus

Thousands of students around the country are homeless or hungry, and their classmates and colleges might never know 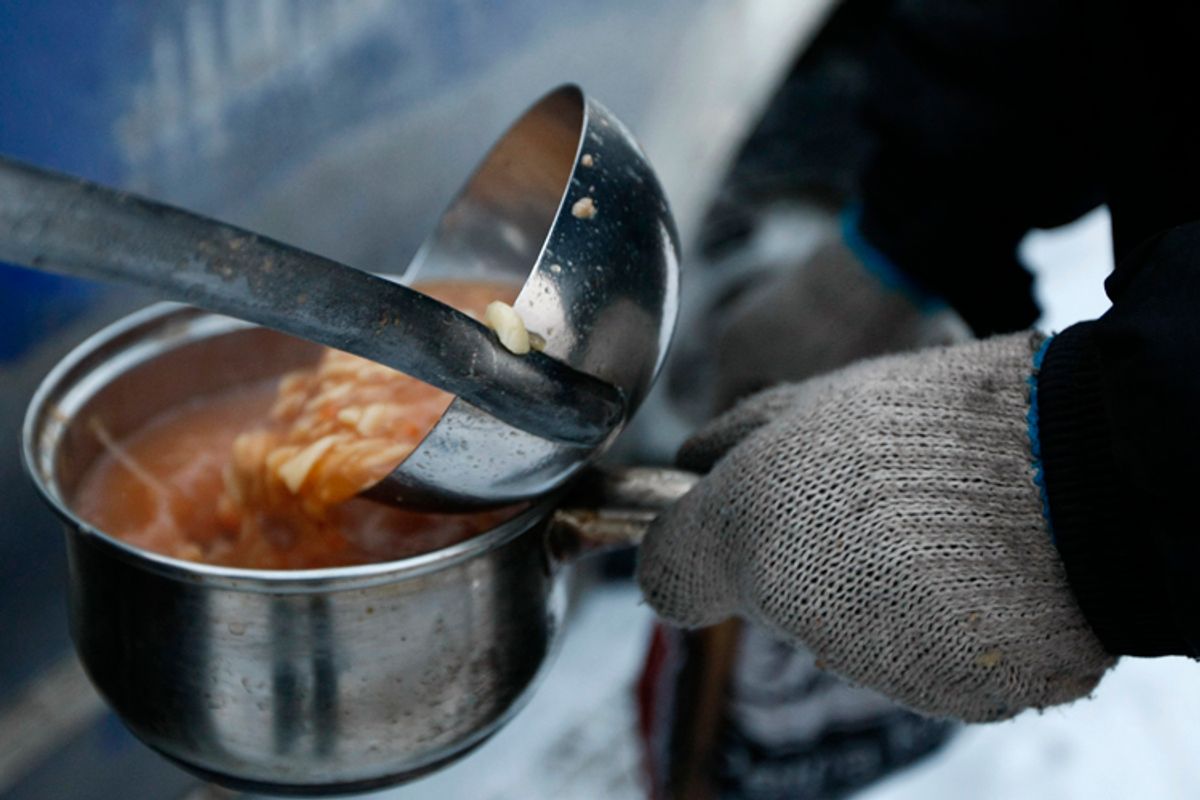 For three years, I've been showing my English composition classes news clips about college students and food stamps. The first is a segment on alleged Bridge Card abuse in Western Michigan, followed by a campus response clip from students at Michigan State who lost their food assistance after a statewide reform. Then we watch a report on a northern California college so supportive of student food stamp use that it offers applications in one of its administrative offices. Classroom response can be hard to gauge; after discussion, my classes seem to agree that a student in need should not be denied government food assistance -- but there's also a bit of cynicism there. College students who look no different than themselves couldn't be that hungry -- food-stamp hungry -- could they?

In fact, college student hunger and  homelessness are on the rise. But it's no surprise that some of my students have a hard time believing it. Until very recently, neither situation has been thoroughly investigated. Colleges are not required to track student homelessness; the best -- and only -- national measure available is via the Free Application for Federal Student Aid. Currently, about 58,000 students have self-identified as homeless on their FAFSA forms. But the number is likely higher, as FAFSA does not always account for non-degree students and not all students without a permanent residence self-identify as homeless.

Food insecurity is even more difficult to gauge. Whereas K-12 school systems evaluate students to determine eligibility for free and reduced-price lunch programs, no comparable assessment exists in higher education. Without reliable, regulated programs in place, it can be difficult to get reluctant students to out themselves as food insecure.

Hunger is difficult to spot without their input. It has no universal profile. It doesn’t present the same way for every student. This is often what hinders my own classes from accepting the seriousness of the problem during our college-kids-on-food-stamps discussions. They expect hunger to manifest as emaciated stoicism, listlessness, or fidgety desperation, thereby making it easy to detect. But students who don’t want their professors or peers to know that meals aren’t consistently accessible to them can easily conceal their reality.

Placing the onus solely on the homeless or hungry student to self-identify ensures that the needs of both populations will go underaddressed. Some are reluctant to confide in peers for fear of stigma and ostracism. Such was the case for Columbia College Chicago student Aaron James Flowers, who told the institution’s student-run newspaper last year that his friends stopped inviting him to events when they discovered his disadvantage and began “treating him like a bum.”

In the years following the Great Recession -- and now in the wake of steep SNAP benefit cuts nationwide -- college campuses are finding themselves in critical need of immediate on-site resources to accommodate a growing population that's hesitant to reveal itself.

This isn't a new problem. Anecdotally, college faculties have long traded stories about students who've asked to share their lunch or for whom they keep a small stash of non-perishables in their office drawers. In 2004, the Progressive published a feature on college homelessness and faculty who went as far as clandestinely allowing students to sleep in their offices for months.

What's unclear is why provision for these kids has been so slow in coming. In 1993, Michigan State University created the first college student food bank in the country. Ten years later, only about 20 known higher ed institutions have followed suit, according to MSU's College and University Food Bank Alliance.

My own college recently joined the right for food justice on campus, opening a food bank in its student lounge. Its first student-run food drive started last Friday, just in time for the holidays. The presence of a campus food bank invites hungry students to come out of hiding and destigmatizes their needs by publicly acknowledging them. Most important, the frequency of its use provides colleges with a solid gauge of campus-wide hunger. And it helps teach students what hunger looks like: It looks just like them.