It used to honor the biggest stars in the world. But it's not People that changed -- it's the lack of male stars 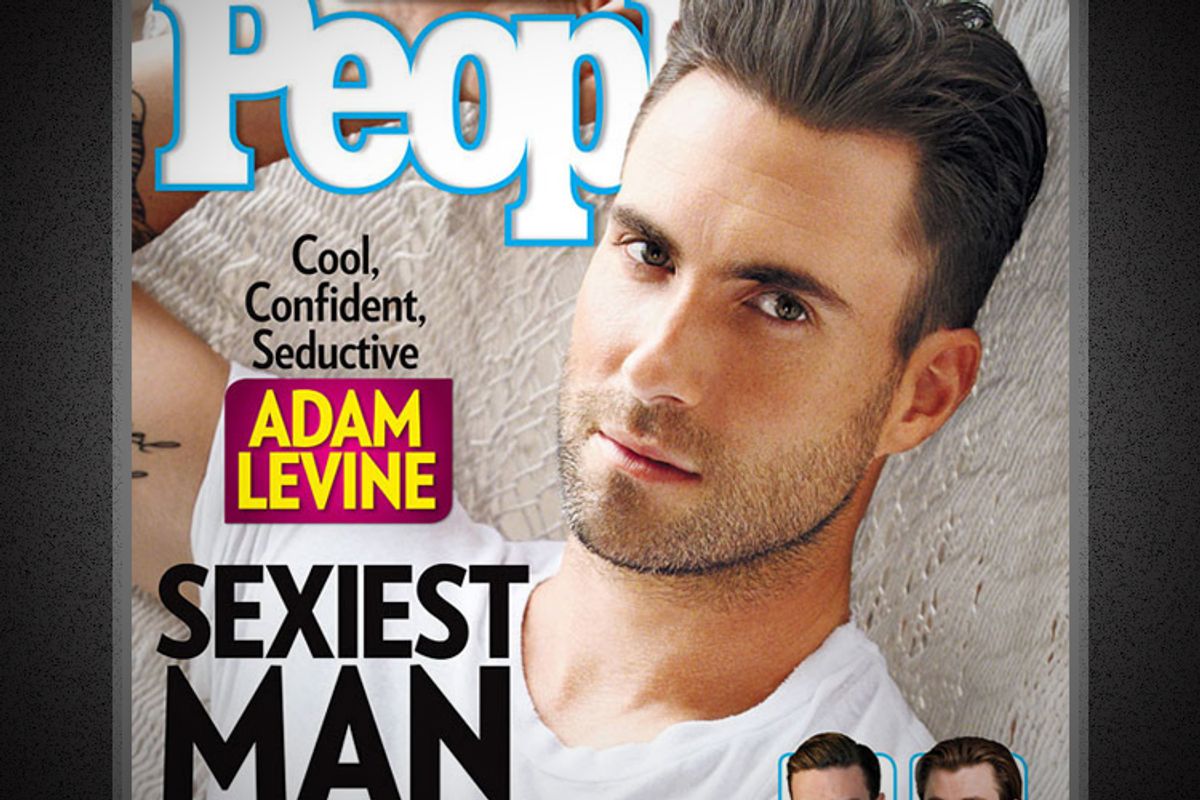 Once upon a time, the Sexiest Man Alive honor really was an honor. The early winners included a few flukey choices -- Nick Nolte at 51, Sean Connery at 59 -- but even those fellows were in some way central to the culture (Nolte was tapped just after he showed his sensitive side in his Oscar-nominated "Prince of Tides" role; Connery just before he stole the show in "The Hunt for Red October"). The more common honoree was both unanimously acknowledged as, at once, at the very height of fame and "sexy." Mel Gibson in 1985? John F. Kennedy Jr., in 1988? Brad Pitt in 1995? Denzel Washington in 1996? All of these folks make a perfect sort of sense.

How did we go from "Legends of the Fall"-era Pitt to a judge on "The Voice"? Adam Levine -- who was ratified as this year's Sexiest Man on the NBC singing show last night, but whose sexiness is very much an open question -- is no '96 Denzel. He's not even a 1987 Harry Hamlin.

Looking at the list of People honorees, the question of access becomes very clear. At a certain point, it became deeply uncool to cooperate on a "Sexiest Man Alive" cover story. Almost every Sexiest Man Alive in the past 10 years has been a repeat offender from an older generation (George Clooney, Johnny Depp) or an amiable dope, not yet quite a superstar, whose public image is far more focused on his looks than on acting chops. Consider: Hugh Jackman pre-"Les Misérables," when he was best known for an impossibly swollen physique; Ryan Reynolds and Jude Law, both of whom were pushed down America's collective throat but neither of whom ever quite made it in the way they were supposed to; Matthew McConaughey in his mid-career doldrums, before he reinvented himself as a serious actor; Channing Tatum, who's explicitly played off his body throughout his career in a manner much more common among female film stars. The disconnect between who might be the "best" choice and who got chosen became painfully clear during Ryan Gosling's breakout year, when a pre-"Silver Linings Playbook" Bradley Cooper was the breakout choice. Cooper, seeking to differentiate himself somehow from the "Hangover" franchise, would give People a photo shoot. Can you imagine the assiduously cool Gosling doing the same?

Salon, of course, anoints its own Sexiest Man each year -- but we're very consciously not looking for someone at the white-hot center of the culture. We have the luxury of being contrarian or offbeat. People, on the other hand, has a long tradition of picking out someone who represents a masculine ideal for that year. The limited number of actual male stars whom everyone finds sexy might be uncomfortable cooperating in a photo shoot with a weekly tabloid; Ryan Gosling has a fairly calculated image, and Chris Hemsworth, a star of America's biggest superhero franchise, has lately been talking about his starvation diet for a serious upcoming role. It's hard to imagine Mark Wahlberg or Leonardo DiCaprio in their current incarnations agreeing to cooperate, either; they're serious actors, and cooperating with People in an era when the Kardashian-crazed celebrity weeklies seem more and more removed from aspirational stardom is far different than doing so in the 1980s or 1990s. (For a woman to be perceived as "beautiful" carries less baggage, which is why the likes of Gwyneth Paltrow, Beyoncé and Jennifer Lopez are willing to pose for the People "World's Most Beautiful Woman" cover.)

And even Gosling and Hemsworth don't feel as omnipresent as, say, 1990s Brad Pitt. Hollywood's failure to generate new stars and its increasing reliance on franchise fare means that a choice might feel righter than Adam Levine, but there's no one person who feels famous enough to get the nod. Last year's Channing Tatum choice was, interestingly enough, probably the best-timed Sexiest Man choice in recent memory, coming as it did after the release of "Magic Mike," but the history of the Sexiest Man Alive contest is such that choices that apt and well-timed used to come every year. There was always a new breakout star around the corner, whereas now leading actors, even attractive and charismatic ones, are just replaceable parts that occupy screen time when we're waiting for the giant robots.

That Levine is the first non-actor to get the People honor in 25 years -- and that his fame largely stems from his involvement with a reality show -- says a great deal both about the degree to which the celebrity press has moved away from Hollywood and the degree to which Hollywood has moved away from creating new stars. There are stunningly few mass-culture products for leading men anymore, not that it matters for People readers. They can all go online to the fan Tumblr for their favorite niche star. Adam Levine's honor just means he's the most famous person who's not self-serious enough to deny that he's there to be objectified. It's not People that changed -- it's the people it covers.