Since the 1970s, pumas have been staging a comeback -- and now they're moving east of the Mississippi 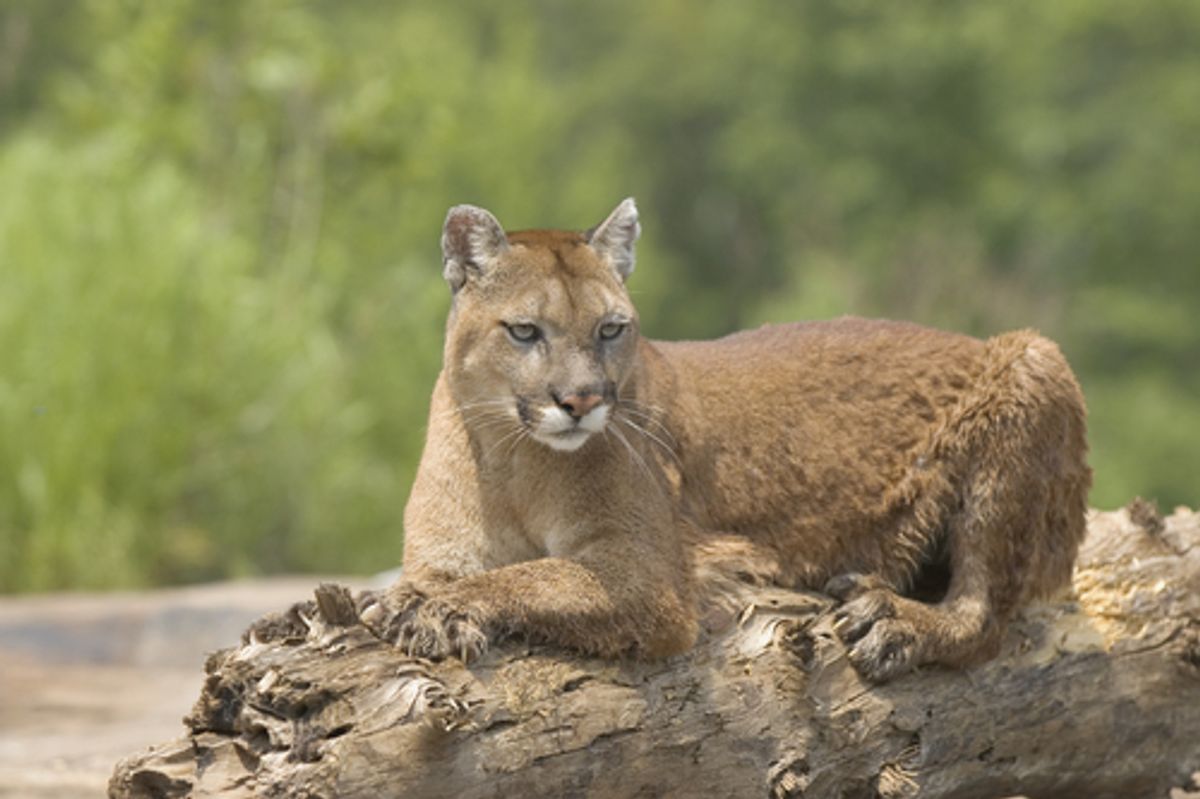 Across the United States, cougars are on the rebound, and city dwellers and suburbanites are getting a bit spooked by sightings of the 100-pound predators. Just last week, three cougars were reportedly seen outside of Baltimore, right on the heels of a sighting in the Washington, D.C., suburbs a month ago.

Since the 1970s, cougars—or mountain lions, pumas, panthers, catamounts, or whatever else you might call them—have been staging a comeback, growing to an estimated population of 30,000 in North America, though mainly west of the Mississippi. They were once widespread across much of the United States, including the Northeast, where they’re now considered officially extinct. Florida was home to another large population, but they’re listed as endangered in the Sunshine State (including by traffic accidents—see “Caught in the Headlights”).

Over the last decade, there have been many confirmed sightings of the Western subspecies of these cats moving east, towards habitats their eastern cousins once called home. Alongside this growing body of evidence are many more suspected but unconfirmed sightings in states including New York, Massachusetts, and West Virginia. Cougars are becoming the new Big Foot, the focus of a spreading circle of unconfirmed encounters and folklore, complete with blurry video footage.

Cougar attacks are extremely rare, but they do happen—on Saturday, a captive cougar mauled a keeper at an Oregon wildllife sanctuary, and last month, aBritish Columbia man had to spear a cougar attacking his partner. Folks east of the Mississippi are already having to get used to coyotes as they spread eastward, taking over habitat once occupied by the now-endangered gray wolf. Could cougars also make a play for the niche of top predator?

Probably not, say experts. The biggest reason is simple geography. Young males might journey hundreds of miles to the East Coast in search of new territory, but establishing a sustainable cougar population requires larger numbers of males and females. “The biggest problem for them is a large gap in habitat between the eastern Dakotas and the northern parts of Minnesota—it’s mostly just farmland,” says Chris Wilmers, who runs the

Unlike coyotes, which thrive in open prairie habitat, cougars need forest cover. “It’s not a question of whether individual animals can make it,” explains Wilmers. That obviously happens in rare circumstances. “It’s a question of whether a male and female both make it and find each other—and presumably that would have to happen a few times to get a population started.”

Even if cougars were to bridge the country’s breadbasket, their need for forested habitat suggests they won’t establish themselves in suburban and urban areas the way coyotes have. “Coyotes can live and hunt out on the prairie,” says John Kanta, a regional manager for the South Dakota Game, Fish, and Parks Department. “A mountain lion is an ambush predator. It needs that cover and that stealth to sneak in and pounce on their prey.”

That’s not to say the cats can’t go out and prowl the suburbs. The presence of small prey mammals, like raccoons, may sometimes draw cougars to suburban areas, but even there, the felines usually remain elusive. “We have some cats that can make their entire living in real close proximity to people and never have any negative interactions,” says Marc Kenyon, the cougar expert at the California Department of Fish and Game. “I know of at least one female who had two litters living essentially in peoples’ backyards in southern California. She would spend the better part of an afternoon sleeping in a tree in somebody’s yard.”

The cats manage to keep a low profile because they are solitary hunters and fiercely territorial. Instead of forming packs like coyotes or wolves, each cat requires its own range, which naturally controls the density of cougars in an area. “Males will kill other males coming into their territory,” Wilmers says, “and cubs.”

If a cougar does make itself a nuisance in a populated area, they’re easier to control than coyotes, which are capable of leading police through a two-day chase across Manhattan. A cougar, on the other hand, will almost invariably just go for the nearest tree, cornering itself for easy capture. Jeff Cann, a biologist for the California Department of Fish and Game, often responds to cougar complaints in the central part of the state. “Mountain lions are pretty elusive,” he says. “A lot of times it’s possible to just allow the animal to go back to where it came from.”

Despite the fact that cougars pose little threat to humans, many states still manage their population through hunting—which also makes it more difficult for them to spread east. South Dakota’s Black Hills currently mark the eastern border of established cougar habitat, and hunting has been allowed there since 2005. John Kanta with the South Dakota wildfire agency says some hunters falsely blame the cats for drops in the region’s deer and elk populations. “Mountain lions are killing deer and elk,” he says, “but there are a lot of other things going on.” The real culprits of the deer decline, he explains, are drought and the over-issuing of hunting licenses.

Deer overpopulation, however, is a big problem back east. Could reducing white-tail deer populations—and deer-related auto accidents—make a potential cougar influx more appealing to Easterners? Car accidents involving deer kill about 200 people every year in the United States while, according to Kenyon, cougars have only been responsible for about 20 human deaths in the last 121 years. So far, no one seems to be suggesting that it might be a good thing to encourage courage migration(correction: there are some advocates of that idea), but perhaps the ones who should really be nervous aren’t suburbanites—but deer.