The show has been criticized, but it's notable for including black characters fully in its weird world 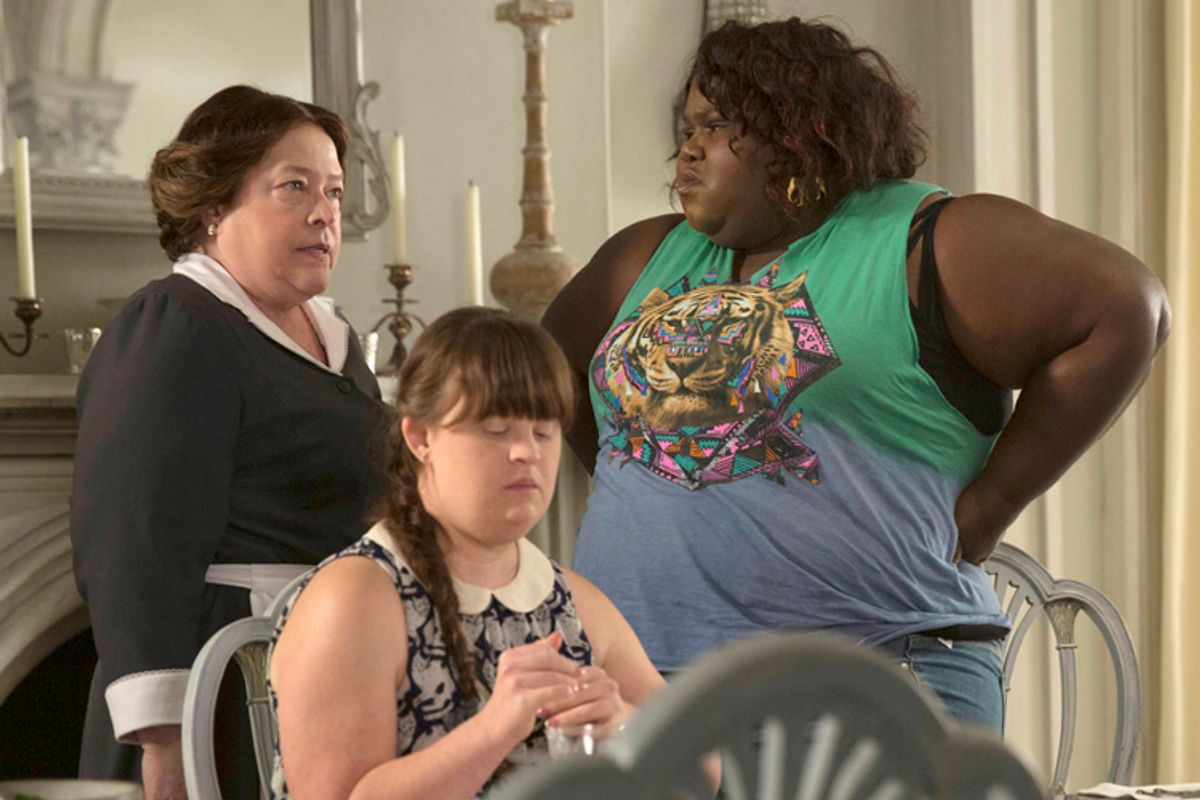 For a couple of weeks now, I've been promising my editor a piece about my reaction to the racial politics of FX's "American Horror Story: Coven." A fair amount has already been written about the show and its depictions of black female witches, immortal slave owners, voodoo practitioners-slash-hairdressers, and tortured slaves-turned-minotaurs. I'd been watching the show for a couple of episodes when I was first alerted to any controversy by an article on BuzzFeed. Contributor Nichole Perkins calls Gabourey Sidibe's character Queenie into question for playing into stereotypes about black women:

The Strong Black Woman is supposed to be positive, a counterpoint to the negative representations of black women that permeate American culture. Examples range from Harriet Tubman to Michelle Obama. Being called a Strong Black Woman is meant to be a compliment. It indicates that despite challenges, black women are superhuman — but it’s a stereotype that’s just as dangerous as those it’s intended to replace... Giving black women superhero qualities is an overcorrection that’s simply limiting in a different way... Then there is Gabourey Sidibe as Queenie on "American Horror Story: Coven," a “human voodoo doll” whose supernatural power is the inability to feel pain, even as she inflicts said pain onto someone else.

In principle, I understand where Perkins is coming from, but "AHS: Coven" is a show about witches. A superhuman ability is pretty much a prerequisite for Queenie's inclusion in all the fun. I suppose she could have been gifted with another, less problematic power. But the problem with stereotypes is that, if you're looking hard enough, you can often find them anywhere. Imagine the potential outrage had Queenie been blessed with the power of Taissa Farmiga's character instead -- a big, black woman with a deadly vagina.

At the end of the day, I'm thrilled that Sidibe -- although billed a bit too late in the credits -- has not been sidelined. She's been given a neat power and the chance to use it in badass ways. If we're still talking strong black women, Angela Bassett's hair-styling voodoo queen Marie Laveau most likely will not earn the veteran actress an NAACP Image Award, but she is one of the pillars of the show. Her ongoing war with Jessica Lange's Fiona Goode over the birthright of witchcraft is what truly makes "Coven" sparkle.

Let's make this about me for a second. This year, the first film that I ever wrote and directed was released in theaters. (If you blinked and missed it, don't worry. It should be out on Netflix early next year.) It was about three black men approaching middle age who were struggling so much with their pasts and regrets that they essentially missed out on the election of the first black president in 2008. In screenings and Q&As, I joked that there had recently been so many films about self-absorbed white men -- "Sideways," "Trust the Man" --  that I just wanted to make a movie about self-absorbed black men.

For me, inclusion is paramount -- inclusion in the zeitgeist, inclusion in the ongoing dialogue of pop culture, inclusion into whatever specific, fucked-up world is being created for the sake of entertainment. To me, "Coven" and HBO's "Boardwalk Empire" are similar in that, not only do they both openly and expansively acknowledge black people's place in American history, they also allow for their black characters to get their hands dirty -- even bloody -- actively participating in that history at its most sordid.

Certainly, it is naive to just be happy to be invited. Not all creatives are sensitive to the particular issues of people of color -- or women, or gays, or the elderly, for that matter.  The makers of shows like "Coven" often trip up over representation, and there's no reason they shouldn't be called out on such missteps. I cringed at the scene in which Queenie masturbates before being raped and nearly disemboweled by an undead slave with the head of a bull. But after days of trying to decipher the political incorrectness of the moment, I concluded it was just uncomfortable and a bit hammy -- no worse than the zombie frat boy being molested by his mother. This simply is FX on Wednesday nights.

This morning, I scoured the Internet for articles and posts about "Coven" with regard to race. I found surprisingly few -- and far fewer that stirred my own ire. The show is deliberately campy. It is also frequently absurd, sometimes frustratingly so. The black characters are part of the fabric of that absurdity. And, as such, sometimes they get on my nerves. Also, I often find Gabourey Sidibe's performance a little heavy-handed. Though each season of "American Horror Story" is self-contained, some of the actors return to play new roles. In a perfect imperfect world, Sidibe will get to come back next time a little stronger -- acting-wise, I mean.