No, Social Security does not increase the deficit! 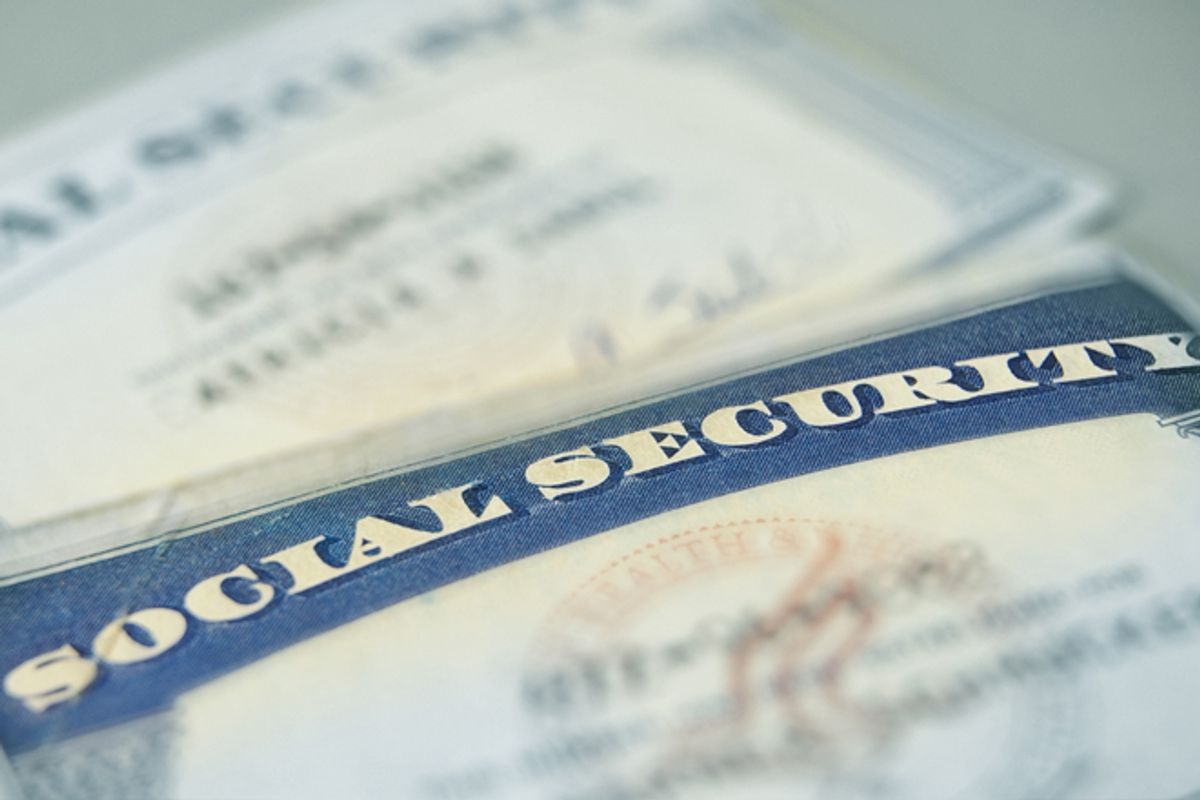 The American people love Social Security, and with good reason. It protects seniors and the disabled from poverty, and it is the most important life and disability safeguard available to the nation's 75 million children. The program is a bargain: Its administrative costs are lower than privately managed retirement plans. Social Security returns in benefits more than 99 cents of every dollar collected, whereas a typical 401(k) could easily eat up 20 cents of that dollar in fees. The program is fiscally sound and prudently managed — a policy triumph.

There are basically two categories of people who want to see Social Security cut: 1) financiers who wish to move us toward privatized retirement accounts so that they can charge us fees; and 2) rich people who do not like to pay taxes. Their main champions are conservatives at the Heritage Foundation, libertarians at the Cato Institute and Wall Street financier Pete Peterson.

Just about everybody else in America is against cutting Social Security, as poll after poll demonstrates. The people have continued to speak loudly and clearly, and yet Washington can’t seem to get the message. This is obviously because a lot of media people and politicians rely on money from the two groups mentioned above. So they have to come up with arguments to try to convince the public that up is down and red is blue. It’s a war of attrition: repeat lies and distortions often enough and maybe they’ll come to be taken as facts.

The latest volley is a shameful and distorted editorial in the Washington Post which attempts to downplay the retirement crisis faced by Americans and to stoke generational tensions by suggesting that Social Security is a burden on young people instead of a vital safeguard. The editorial actually mocked a sensible bill introduced by Sen. Tom Harkin (D-Iowa) that would boost Social Security benefits by increasing taxes on the wealthy. The Washington Post's nonsense was blasted by Senator Elizabeth Warren, who spoke out strongly against cuts of any kind, including Obama's "chained CPI" cut which would prevent Social Security from keeping up with seniors' increasing costs.

A favorite tactic of Social Security's foes is to push the notion that the program somehow drives up the federal deficit, an argument that is completely without merit.

In the first place, the federal deficit is shrinking. That’s a highly inconvenient truth for people trying to stoke deficit hysteria, but they’re banking on the fact that a lot of Americans don’t know about the deficit going down. So they go on pretending that the federal deficit is a dire, pants-on-fire problem, even though most of them know that’s a bunch of hot air.

Even if the deficit were rising — which it’s not — the sensible way to deal with that would be to concentrate on putting people back to work and to invest in productive things like education and infrastructure. That gets the economy going and then, guess what? As tax revenues come back, the deficit goes down on its own, which is what’s happening right now.

Taking money out of people's pockets, which is what cutting Social Security would do, actually could have the perverse effect of increasing the deficit because it means that people can’t buy the stuff they would normally buy with this money, like food and healthcare. What that happens, the businesses trying to sell those items have to scale back and lay off employees, which means less tax revenue for the government. And so on. Not exactly a recipe for a booming economy.

In the second place, it’s a plain economic fact that Social Security is not a driver of the deficit. Nevertheless, irresponsible people continue to confuse the public by using various tricks such as predictions of the future that have little basis in reality and accounting methods applied in devious ways.

We’re going to cut through all of that. By the end of this article, you will be able to confound all Republicans and centrist Democrats who offer up nonsense linking Social Security to the deficit and spread hyperbolic rhetoric.

1. Social Security is a self-financed program.

First, let’s talk about how Social Security works. If you are employed, you most likely pay a certain amount of your paycheck, generally 6.2 percent, to Social Security. Your employer kicks in the same amount. (The exception would be a few state and local workers who get public state pensions instead of Social Security).

The Social Security program has an independent budget that is separate from the rest of the federal government. Social Security is fundamentally a pay-as-you-go system, which means that payments collected today immediately go to pay benefits.

The Wall Street-driven financial crisis and recession reduced the payroll collections, and in 2010, Social Security began to tap into its trust fund, which had been built up for just such an emergency.

You might hear some guy from the Cato Institute getting clever by pointing out that Social Security is using interest on the government bonds it holds to help pay for benefits, and therefore adding to the deficit because the government has to pay that interest. That’s a bit like saying that because I was smart and saved money and then loaned it to my profligate neighbor, I am somehow responsible for increasing his debt when I ask him to pay back what he borrowed. Would any reasonable person make such an upside-down claim?

No. Yet people calling themselves “fact checkers” are promoting this absurdity in the mainstream media.

As economist Dean Baker has explained, it’s a perfectly ordinary thing for bond holders to use interest collected on bonds. Grandmothers with pensions do it, and they aren’t generally accused of adding to the deficit. Just for fun, Baker uses the example of Pete Peterson as an illustration: “If Peter Peterson used $5 million in interest on government bonds he held to finance the startup of his Campaign to Fix the Debt, would it be accurate to say that he had contributed to the deficit? I suspect that most of the fact checkers would say that it is not.”

2. Social Security is not in danger of running out of money.

The Trustees report is based on predictions that are deliberately conservative. Yet even with its worst-case scenario reasoning, the report says that the tax income would still be enough to pay about three-quarters of scheduled benefits through 2085. Does that sound like a crisis? No, because it isn’t. The real crisis is the growing number of Americans who will face retirement without traditional pensions and not enough money in their 401(k)s. Cutting Social Security would only add fuel to that fire.

3. There is no justification for tampering with Social Security’s financing right now.

Economists are not very good with crystal balls. If you don’t believe this, look at how few of them predicted the last financial crisis. Yet they are addicted to making prognostications.

Social Security’s finances are in perfectly good shape: the Social Security Trust Fund has a $2.7 trillion surplus and will continue to grow until 2021. Perhaps there will be more trouble some decades down the road, but we will be better able to make those assessments when we actually see what the reality is. To cut benefits right now because of a problem that might occur years from now is ridiculous, unless of course your real concern is to cut taxes, which is naturally the desire of America’s Ebeneezer Scrooges.

If you insist on doing something right now, there is a very simple way to generate more revenue for the program, and it doesn’t involve cutting benefits in all the myriad ways the politicians and pundits have proposed: Raise the cap on earnings taxed to pay for Social Security from its current $113,000 to something like, say, $200,000. Presto! You now have loads more revenue and you did not keep grandma from buying medicine.

You don’t hear the greedy rich jumping on board with this idea, because they don’t like to pay taxes, even when doing so might benefit the economy where they make their millions. You don’t hear the financiers cheering this approach, because they really want to see the program destroyed so they can get their mitts on your retirement money. But it would certainly suit everybody else.

Now you’re ready for Thanksgiving dinner with the in-laws. Enjoy!