Sarah Silverman's "We Are Miracles": Performing neurosis, and roping the audience in

The comic pretends to be uncomfortable with her own raunchiest material, but insecurity's part of the act 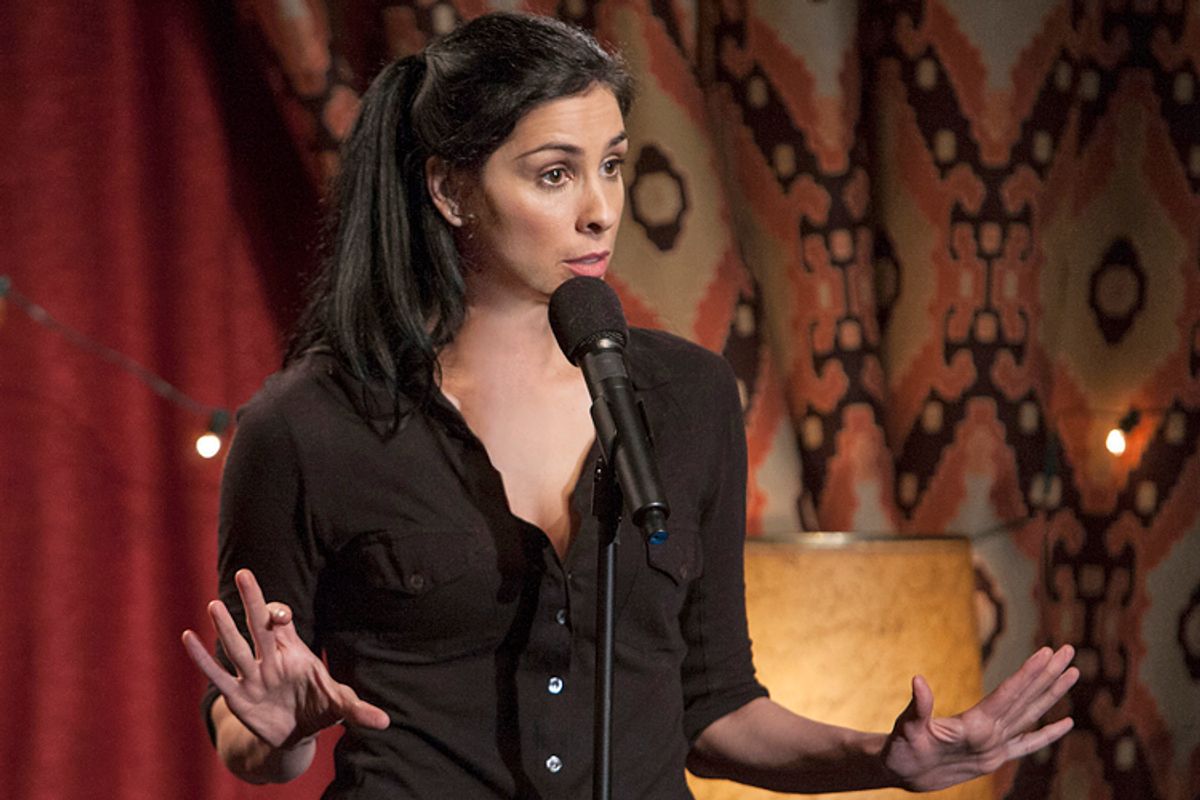 Sarah Silverman's "We Are Miracles" opens with the raunchy comedienne being taunted by four Latino gentlemen for taping her first ever HBO Comedy Special in a rather small venue. "You need to call your agent," one shouts out from the passenger side of the lowrider. "You can't be doing no HBO special for 39 people. That's, like, super tiny." Silverman assures the tattooed cruiser that the Largo Theater is not tiny but "intimate, fuckface." But her confidence appears shaken. She covers with a lame joke: "What do you call a car full of Mexicans? Pains in my ass--" and adds a "hole" so the punch line fits squarely within her foul-mouthed milieu.

Is it still a very big deal for a comic to have his or her own HBO Comedy Special? If you're Louis C.K. and you win an Emmy, certainly. But, if you're that lucky guy, you also have the celebrity weight to muscle HBO, repurpose said special on your own website, and sell it for a finsky a download at your discretion. Otherwise, success is not as assured. Silverman opens her own first special in a way that downplays any expectations. Before -- presumably -- running onto the stage to kick off her act, she abruptly and desperately pleads with the men for their blanket approval: "Tell me I'm great!" And, in fact, the entire special feels a bit like an exercise in insecurity -- albeit false insecurity.

One of the things that I have always found reassuring about Silverman is how comfortable she is in the lane that she has created for herself. Once, during an interview, she recounted to me the story of how she'd been fired from "Saturday Night Live." So many years later, she still seemed somewhat relieved. I'm not well-versed in Silverman's Comedy Central program, but I've seen plenty of her stand-up and "We Are Miracles" is hardly shocking in its attempts to shock you.

Here is a partial list of subjects directly addressed within the hour: her mother's bush, her father's balls, Make-A-Wish Kids, terminally ill babies, rape victims, 9/11 widows and Scientology -- even she admits that last one's a gimme. Silverman moves in a leisurely way from one pressure point to the next, her signature mischievous grin and sweet voice slathering every filthy moment in saccharine. So, where is the aforementioned insecurity, you ask. Let's start there. Early on, after an abrupt change in topic, Silverman declares that she does not do segues. That's fine; a lot of comedians don't knit their bits together with transitions. But at this moment, you know you are not watching the kind of masterfully crafted, thematically sound routine you might expect from someone like Chris Rock.

"We Are Miracles" makes the most of such disclaimers -- particularly moments in which Silverman stops and pretends, for the sake of the audience, that she is not comfortable with her most uncomfortable material. It's a tactic that comedians often use when working blue. Louis C.K. will stop, bemused, and update the audience when one or more of his jokes qualifies as the worst thing he's ever said. Does it work for Silverman? Yep.

One of the special's edgiest moments arises when she tries to explain why rape jokes are not at all edgy. But my favorite moment comes when Silverman leaves the audience queasy with an unsolicited statistic and then admits she made it up for sick reasons that she, herself, doesn't quite understand. "That's something I'm going to talk about in therapy," she muses. "But I wanted to say it. I needed to say it to you. And so I built a frame around it that forced you to not be able to blame me for saying it." The stat isn't the joke. The joke is Silverman's spot-on self-analysis. The punch line is relinquishing responsibility and roping the entire audience into her neurosis. "You know what?" she says, after a pause. "I feel like you should take some of the blame ..."

"We Are Miracles" is not uniformly hilarious. It is mildly amusing throughout. The satisfaction that you will experience is perfectly in sync with the mellow alternating gurgles of laughter and expressions of discomfort emanating from the small audience -- "the Largo 39," as Silverman calls them -- and maybe that's the point.

"We Are Miracles" airs Saturday night on HBO.