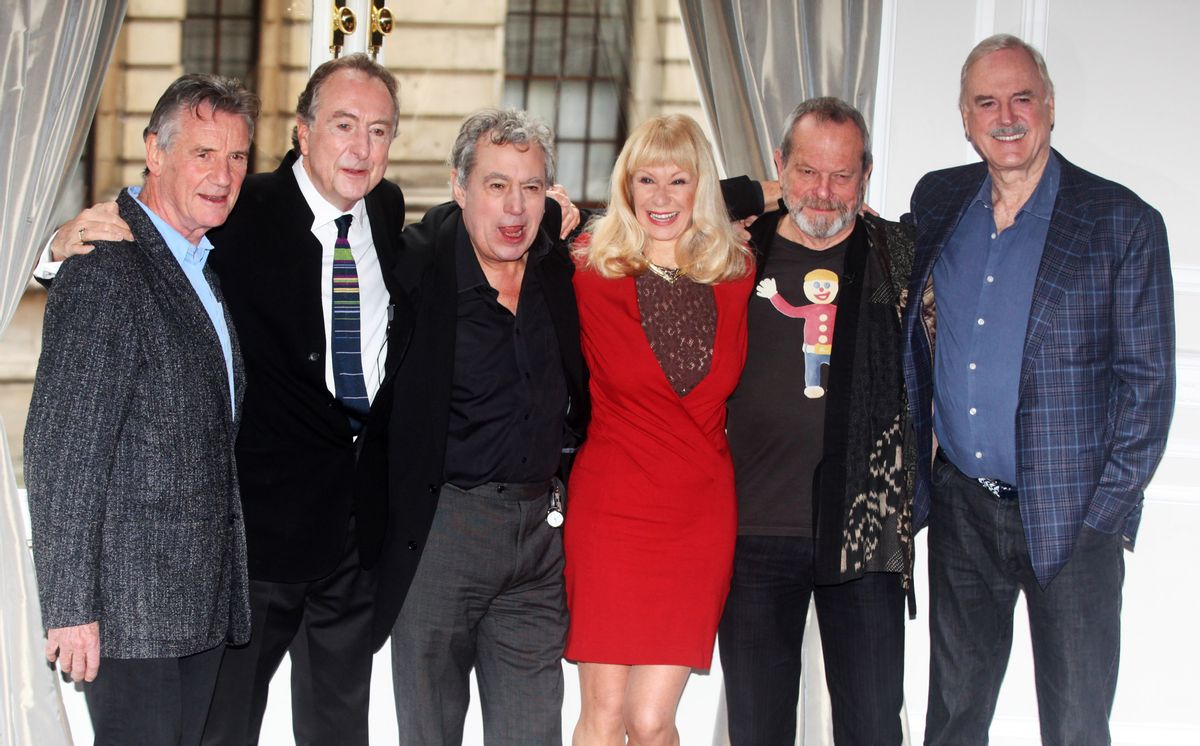 In some of the most exciting comedy news of the year, British comedy troupe Monty Python has announced that they are reuniting for a one-time show in July. The group's surviving five members, along with Carol Cleveland, will perform classic sketches with a "modern" twist and some new material as well. Members Terry Jones, Michael Palin, Eric Idle, John Cleese and Terry Gilliam later appeared on Reddit to answer more questions from fans. Here are some of the most interesting parts of the conversation:

Q: Are the five of you planning on being the sole writers for your reunion show or will you have other contributing writers? if so, who might they be?

Michael Palin: It will all be our material. It's just easier that way. Along with Carol, we'll be the main performers. What we will have is a group of dancers who'll come on and do outrageous things whilst us oldies get changed. Various people have offered to come and help out. Eric had a tweet from Noel Fielding offering to come and make tea. There's been a huge amount of interest from people I respect, like Bill Bailey and Eddie Izzard.

Q: Do you think you're going to have as much fun this time round?

Terry Jones: Yes, I think so. I think we'll have more fun actually, because the reaction seems to be so big.

Terry Gilliam: Might even be more fun - it's been a long time since we've worked together. There's a playfulness, an impishness.

Q: How did the relationship form with [Carol Cleveland]? Was there ever talk of making her a Python? How many of you slept with her? Just kidding.

Eric Idle: All of us slept with her, and half the audience

Q: Who are your favorite female comedians that might, just might, have been worthy of Monty Python?

Eric Idle: Gilda Radner. Sarah Silverman is quite a dish.

Q: What is your favourite sketch/skit that you've written in your careers?

Terry Jones: The rachmaninoth piano concerto. The pianist is escaping six padlocks and a straight jacket when the orchestra starts off. The bag rolls in with me inside it and I get my hand out inside just to strike the right cords.

Terry Gilliam: I don't have favourites. My favourite is the Undertaker sketch where Graham comes into an undertakers with a bag dragging a dead mother's body in it trying to figure out what to do with it. We pushed the limits of good taste, weren't afraid to offend - there were no rules which is very different to world we live in now.

Q: How much of the movies would you say is improv vs scripts?

John Cleese: The proportion of ad libs was about 0.0001%. I admire improv but don't want to do it myself. I prefer writing.

Michael Palin:Most of the improvisation is done in rehearsal or when we're writing. When we actually have to film the movies, because there's a camera crew there, they need to know where we'll be. It's very nice sometimes to have a handheld camera and invent little things on a tape. The basic script, we adheer to, but it's nice to have looser moments and put things in that we've never done before. I remember playing the ex leaper in the Life Of Brian and it's a really long take. We get to the very end and I nearly trod in some donkey shit. I saw it and did a little ballet.

Q: Which Terry is the good Terry?

Terry Jones: Terry Gilliam because he feeds us.

Michael Palin: They're both good in different ways. Gilliam's imagination is so amazing, and Jones listens when you talk. Jones is the best drinking Python.

Terry Gilliam: Does there have to be a good and bad? Can we have shades of grey? 50 of them possibly?

Q: Is it true that when filming Holy Grail that you could not afford horses so the coconut joke was made because of a small budget?

Michael Palin: Yeah. It was actually a sketch that me and Terry Jones had written. We had these knights clicking coconuts. Then we decided the whole medieval Holy Grail thing would need horses all over the place. Someone said why don't we just have coconuts all the time.

Q: Which of you is the worst to work with?

Eric Idle: I am. I'm also the worst to sleep with.

Terry Gilliam: I don't like working with me. I usually work with actors who aren't me

Q: What is the greatest difference between English humor and American humor?

Q: Which Python member always made the others laugh the hardest?

Terry Gilliam: That's easy - Mike. He's such a nice man but such a brilliant actor. He's able to do a far greater range of character types. John is extraordinary but you always know he's in there somewhere. Mike comes and goes.