5 signs the rich have way too much money

You know our economic system is out of whack when someone can buy a $5,000 hamburger or a $500 milkshake 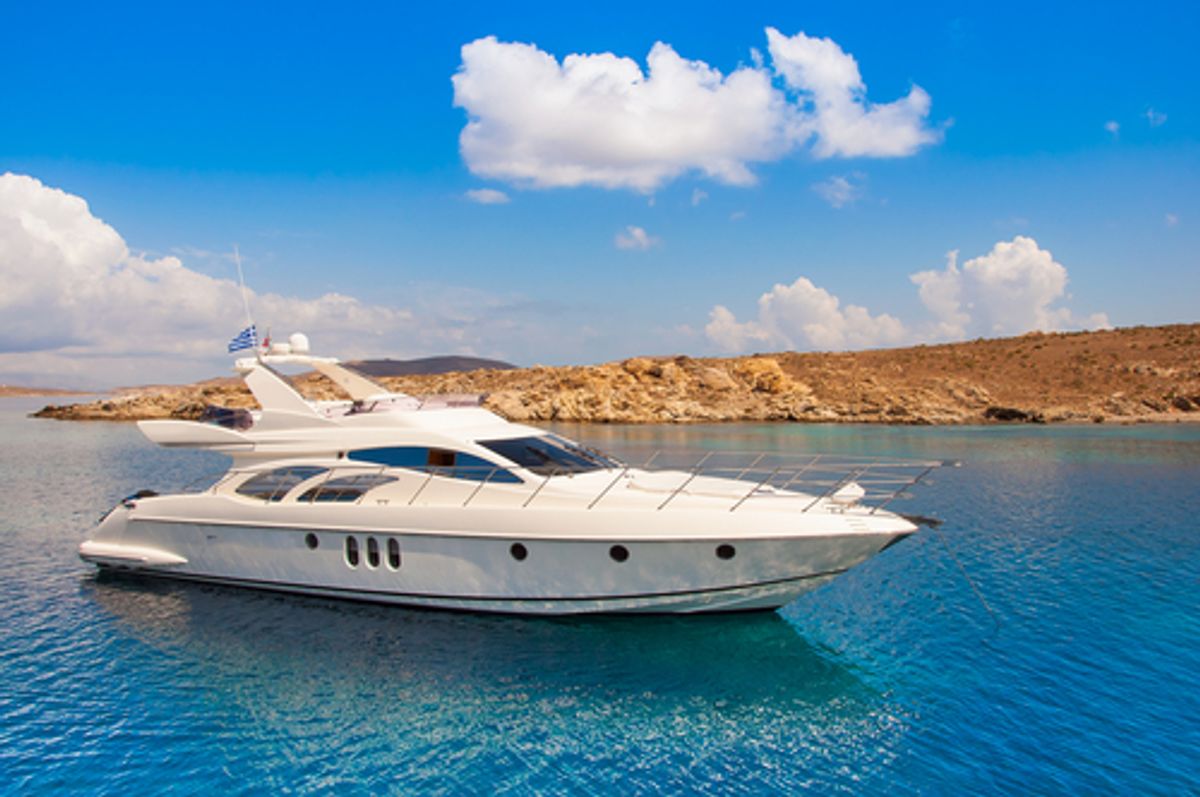 Here's something to read after you get done trying to figure out how to make the mortgage or the rent or the car payment this month. It's a little story about how the other half lives. Well, maybe not the other half, exactly. More like the obscenely wealthy .01%.

What do you do when you just have too darn much money? Let’s say you already have your mansion(s), your jet, your yacht, your cars, your $50,000 watches, and you’ve still got too much money left over. (Yes, this really is a problem some people have.) While many, many Americans are struggling to get by, and a very few ultra-wealthy have too much money, here are five signs that the rich are just too rich.

2) You can get a $5,000 hamburger for lunch. The Fleur de Lys restaurant in Las Vegas at Mandalay Bay offers the "Fleurburger 5000" for $5,000. The burger consists of a Kobe beef patty “topped with a rich truffle sauce and served on a brioche truffle bun. And this burger comes with its own beverage, a bottle of 1990 Chateau Petrus that is served in Ichendorf Brunello stemware that you get to keep.”

3) You can get a $500 milkshake to go with your $5,000 hamburger. The Powder Room restaurant in Los Angeles is selling a milkshake for $500. For your money you get “special stuff: edible gold, Belgian chocolate, and a crystal ring.”

What do you look at while you are eating and drinking your awesome, and awesomely expensive, luxury?

Too Much In The Hands Of Too Few

This really is all about too much money in the hands of too few people. Agustino Fontevecchia at Forbes writes in "The Reason Why Francis Bacon's 'Lucian Freud' Is Worth $142 Million":

"As the ultra-wealthy become even wealthier, the top-end of the art market, along with real estate and other luxury sectors, have experienced an incredible surge as cash is being channeled into alternative investments."

"The final, and possibly most important factor is the rise of the mega-rich. “Since the recession, the wealthy appear to be becoming even wealthier, while middle-class wages are more stagnant,” said Galbraith, who notes this is apparent in the art market where the high-end is experiencing more activity. “The ultra high net worth and the newly wealthy are looking to get into the art market,” said Markley, who notes contemporary art is accessible and acts well as a status symbol. If the Forbes 400 is any indication, the wealthy are getting wealthier, with the 400 richest Americans now worth a cumulative $2 trillion, up $300 billion from a year ago and with an average net worth of a record $5 billion, an $800 million increase from a year ago."

So what if a very few people have such enormous sums? These expensive excesses of food, wine and art don’t really affect regular people like you and me. But it turns out that the distortions caused by the excesses of the ultra-wealthy affect all of us a lot.

Take the housing market. You may have noticed headlines like the following: Hedge funds crowd first-time buyers out of housing market or How Big Institutional Money Distorts Housing Prices. If you live in certain areas of the country, like the San Francisco Bay Area, rents are soaring and it is unimaginable that you might ever purchase a place to live. The ultra-wealthy are purchasing houses by the hundreds to be rented out.

Then, of course, comes the usual next step when the ultra-wealthy are involved: they use their wealth and power to get things the rest of us can’t. One frequent example is demands for tax cuts. In cash-strapped Dayton, Ohio, this story: Hedge Fund Turned Property Owner Seeks Large Tax Cuts:

“Magnetar Capital LLC, investigated by the Securities and Exchange Commission for its housing bets leading up to the property crash, acquired a rental business in January with about 1,900 properties from Charles H. Huber’s widow. In April, its management company applied for the largest cut to property tax assessments in the county’s history. The move could curb funding for public schools, the police and fire departments and services to the disabled, said Montgomery County Auditor Karl Keith.”

A terrible, wealth-worshiping philosophy has taken hold among many of our conservative policymakers. A couple of months ago a piece in Forbes, Give Back? Yes, It's Time For The 99% To Give Back To The 1%, spelled out this conservative philosophy:

“The community” never gave anyone anything. The “community,” the “society,” the “nation” is just a number of interacting individuals, not a mystical entity floating in a cloud above them. And when some individual person—a parent, a teacher, a customer–”gives” something to someone else, it is not an act of charity, but a trade for value received in return.

[. . .] Here’s a modest proposal. Anyone who earns a million dollars or more should be exempt from all income taxes. Yes, it’s too little. And the real issue is not financial, but moral. So to augment the tax-exemption, in an annual public ceremony, the year’s top earner should be awarded the Congressional Medal of Honor."

The Forbes piece says that profit—no matter how attained—is the true measure of value in society. According to one example used by the author, Goldman Sachs has "done infinitely more for mankind" than people like Mother Teresa. The author knows this is true because of Goldman Sachs' "billions in profits."

You may remember reading that Goldman Sachs was accused of working with a hedge fund to sell "designed-to-fail" investments to customers like pension funds, so the hedge fund could profit from betting that the investments would fail. According to this conservative philosophy, Goldman Sachs' profits are a measure of the "value created" by the "mental effort" that Goldman and the hedge fund put into developing this scheme.

The ultra-wealth of a few may be directly related to the way many people find themselves trying to figure out how to make their mortgage/rent, car payments, etc. Four hundred Americans have more wealth than half of all Americans combined, and just the six Walton heirs have more wealth than a third of all Americans combined. Yet companies like Walmart pays its employees so little that many of them have to turn to the taxpayers for assistance like food stamps just to get by.

This worship of the ultra-wealthy is manifested in policies that give privileges to the rich the rest of us don’t receive. The principle of one-person-one-vote gives way to power and our society eventually becomes ruled by the principle of one-dollar-one-vote.

Examples of our abandonment of the principles of democracy in favor of more-for-the-wealthier include the change from “high-occupancy lanes” where cars with two or three people can bypass traffic jams to toll lanes, where drivers who have more money can purchase the right to bypass traffic jams. We also experience this when we see first-class passengers allowed to bypass the long security lines at airports.

In a recent NY Times op-ed, The Extra Legroom Society, Frank Bruni writes about how people of greater wealth can purchase the right to board a plane earlier, even the right to bypass lines or make others wait while they go around again for rides at amusement parks. While these are examples of businesses, not our government, introducing tiers for the wealthier, they show how Americans have come to accept that people with more money should be allowed to bypass them.

Bruni writes, “But lately, the places and ways in which Americans are economically segregated and stratified have multiplied, with microclimates of exclusivity popping up everywhere. The plane mirrors the sports arena, the theater, the gym. Is it any wonder that class tensions simmer?”

These are a few examples of the excesses the super-wealthy indulge in, along with examples of ways their super-wealth harms the rest of us. There are far more examples in evidence these days. Our democracy—the ability of We the People to make our own decisions about how we should be governed—is what is really at stake as more and more wealth accumulates among fewer and fewer people.