The right's JFK myth: Now they claim he was conservative

To capitalize on President Kennedy's record popularity, the GOP is now embracing him. Here's why that's ludicrous 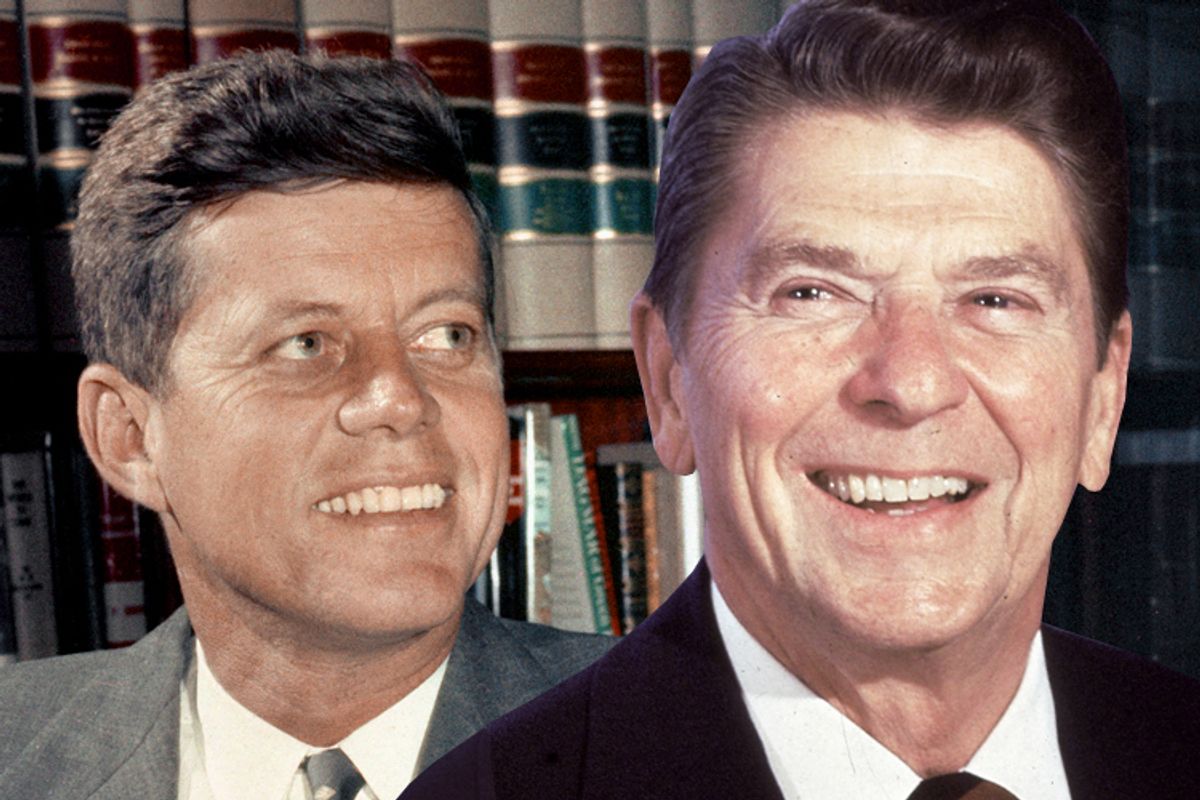 The 50th anniversary of President Kennedy’s assassination has unleashed a variety of moving tributes. But along with that has come an audacious argument: the Republican claim that JFK was really a conservative Republican.

When he was president, nobody called him a conservative Republican. How did this become acceptable?

Republican praise of Kennedy began with Ronald Reagan, who presented himself as a political admirer and even descendant of Kennedy.

At a 1985 fundraising reception for the JFK Library at Sen. Edward Kennedy’s home, Reagan claimed that “It is a matter of pride to me that so many men and women who were inspired by [JFK’s] bracing vision and moved by his call to ‘ask not,’ serve now in the White House.” Reagan said, “Many men are great, but few capture the imagination and the spirit of the times. The ones who do are unforgettable.”

Reagan frequently linked Kennedy to his own desire to enact tax cuts, and quoting Kennedy became an essential component of his efforts to sell his tax cuts, stating that “There’s truth to the words spoken by John F. Kennedy that a rising tide lifts all boats.”

The success of Reagan’s use of Kennedy to promote a conservative economic agenda encouraged him to extend the strategy to the international arena. He claimed that here, too, he was Kennedy’s heir, in that they both believed in a strong national defense and in resisting communism.

In a 1982 national address on the anniversary of Kennedy’s death, Reagan said that in 1962 almost half the federal budget went to defense, but that, to our great peril, the figure had since fallen to only about 25 percent.

“We’re in the midst of what President John F. Kennedy called ‘a long twilight struggle’ to defend freedom in the world,” declared Reagan in 1984. “… Were John Kennedy alive today, I think he would be appalled by the gullibility of some who invoke his name.”

Reagan referred to Kennedy throughout the 1984 campaign, courting “Democrats who have been loyal to the party of FDR, Harry Truman and JFK, but who believe [Democrats] no longer stand firmly for America’s responsibilities in the world; that they no longer protect the working people of this country.”

Reagan proclaimed at another rally: “I think John Kennedy would be proud of you.”

In Boston, Reagan told hecklers “to have the respect to listen to the words that I’m going to say in quoting John F. Kennedy.”

Reagan said that whenever he spoke of JFK, “my opponents start tearing their hair out. They just can’t stand it.”

When I interviewed the late Michael Deaver, Reagan’s closest advisor, he said, “Kennedy was much more a Republican than he was a Democrat.”

Reagan’s extensive praise of Kennedy set the template for other Republicans.

In 1988, George H.W. Bush derided Michael Dukakis’ foreign policy as “a repudiation of the Truman Doctrine and the vision of John Kennedy.” Bush mocked Dukakis: “He’s out there comparing himself to J.F.K. John Kennedy understood military strength.” Gerald Ford called Dukakis’ references to Kennedy “an insult.”

“The party of Franklin Roosevelt and Harry Truman and John Kennedy is rightly remembered for confidence and resolve in times of crisis.” But “Senator Kerry has turned his back on ‘pay any price’ and ‘bear any burden,’ and he has replaced those commitments with ‘wait and see’ and ‘cut and run.’”

Bush’s comments — as Reagan’s had — angered Democrats. “It’s hard for me to listen to President Bush invoking my father’s memory to attack John Kerry,” read a statement from Caroline Kennedy. “President Kennedy inspired and united the country and so will John Kerry.”

First of all, it was Lyndon Johnson — not Kennedy — who actually passed the early 1960s tax cuts. And there were significant differences between Reagan’s and “Kennedy’s” tax cuts. When Kennedy proposed to cut marginal rates from 91 to 70 percent, most business leaders were opposed.

Furthermore, Kennedy’s goal was a Keynesian demand-side cut: He wanted to create a deficit in order to assist the economy by putting money in the hands of middle- and working-class consumers. Reagan’s tax policy, a supply-side cut, aimed to raise revenue and reduce the deficit; he wanted to put more money in the hands of business leaders and the wealthy in order to spur investment.

Finally, Kennedy’s ultimate plan was to use government spending to increase purchasing power, the opposite of what Reagan wanted. As Kennedy told his economic adviser, “First we’ll get your tax cut, and then we’ll get my expenditure program.”

As the late historian and Kennedy aide Arthur M. Schlesinger Jr. told me in an interview, “Kennedy believed in the government. He did not believe government was ‘the problem.’”

Indeed, let us not forget that Kennedy began the Peace Corps, wanted government to play a larger role in solving domestic problems, and — though he came late to the issue — spoke out in favor of civil rights more than any other president since the Civil War.

President Kennedy also inspired an entire generation of future liberal politicians, and he became more liberal as his presidency evolved.

In the 1988 vice presidential debate, Dan Quayle famously invoked JFK in the hope of turning his relative political inexperience into an asset -- by repeatedly saying he had the same amount of congressional experience Kennedy had before he became president. Lloyd Bentsen memorably pounced: “Senator, I served with Jack Kennedy. I knew Jack Kennedy. Jack Kennedy was a friend of mine. Senator, you are no Jack Kennedy.” He was right in more ways than one.

Bernard von Bothmer teaches American history at the University of San Francisco, where he received USF's 2010 Distinguished Lecturer Award for Excellence in Teaching, and at Dominican University of California. He is the author of Framing the Sixties: The Use and Abuse of a Decade from Ronald Reagan to George W. Bush (University of Massachusetts Press).