What's next for broken schools? Keep the charter schools out!

Philadelphia, Chicago and other cities have empty schools. What we do with them is a growing and important debate 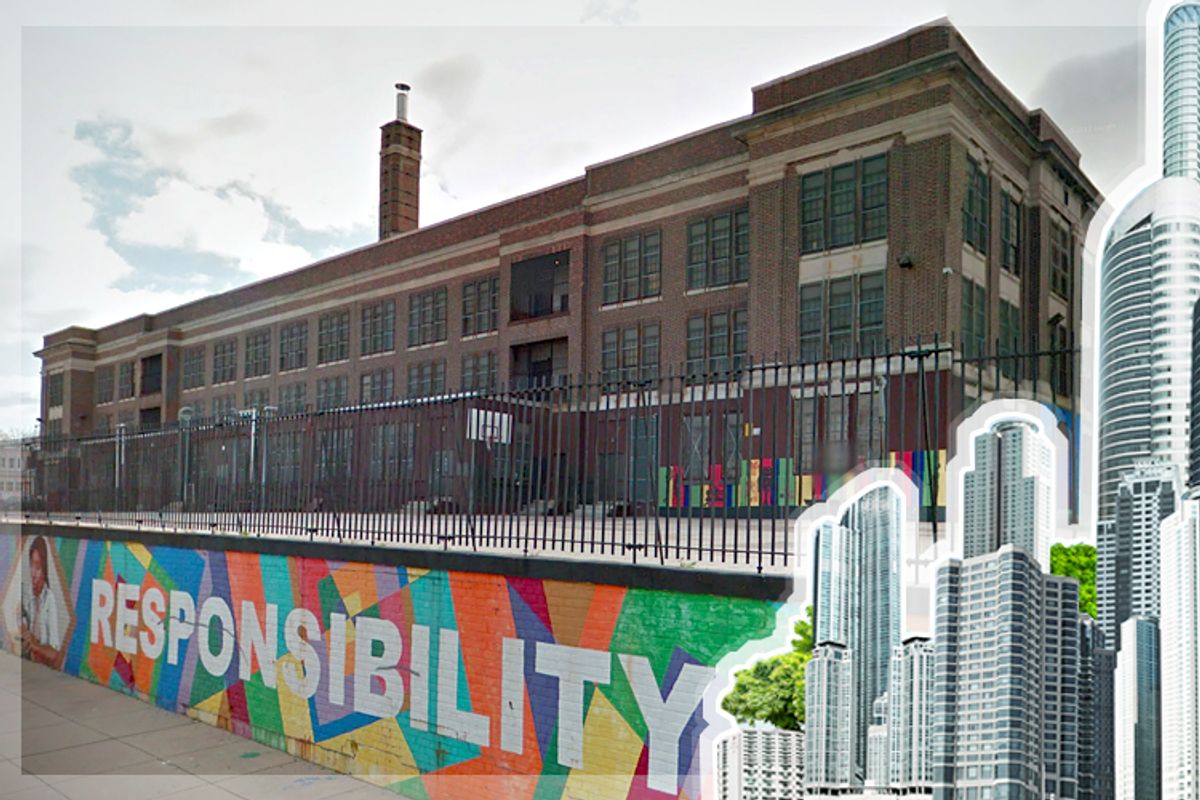 The lawn is neatly mowed, the brick-and-limestone exterior free of graffiti. Steam rises from a pipe behind the cafeteria. Unlike most of the other 23 schools that Philadelphia closed this June, Anna Shaw Middle School shows signs of life. It is, at least partly, still in operation: The second floor is home to Hardy Williams High, a charter school and tenant since this summer, which enrolls several hundred students. The third and first floors lie empty.

A former student might find the atmosphere subdued, compared to the days when thousands of kids roamed the corridors of this grand, three-story building. But for a neighborhood feeling gutted by the closure, the current iteration of Shaw suggests one way forward. Mastery Charter Schools is attempting to buy the building from the Philadelphia School District and use it to house both Hardy Williams High and a middle school.

What happens to a public school when it’s not a public school anymore? This is the question on everyone’s mind in Philadelphia, where 28 schools, or about one-eighth of the district’s building stock, are for sale. A charter school is an obvious option for reuse; residential conversions have also grown popular. Neither is without controversy. In American cities, innovative reuse of defunct school buildings remains the exception rather than the rule.

It’s a field on the verge of a creative breakthrough, if only because the numbers demand it. According to a Pew Report from this February, over the past eight years, 12 U.S. school districts have "sold, leased or reused a total of 267 properties and still have 301 properties on the market.” And that list includes only two of America’s 15 largest cities — Chicago and Philadelphia — and does not factor in the pending Philadelphia fire sale or Chicago’s record closure of 50 schools this May. In the U.S. at large, 1,929 schools were closed during the 2010-11 school year, more than twice as many as in the 1995-96 school year.

Closing schools is a political headache; reopening them in new and innovative roles is a task that demands flexibility and expertise in politics, economics and architecture. “We’re just at the leading edge of this being a big issue nationally,” says Harris Steinberg, a professor at the University of Pennsylvania’s School of Design. This spring, Steinberg led a studio on school reuse in which students put forth new ideas for Philly’s closed schools and suggested a citywide approach to dealing with the properties.

It’s a new chapter in American architectural adaptation. Factory spaces became museums; manufacturing lofts became offices; churches became theaters. Even schools were once repurposed, en masse, to yield to the Gilded Age fortresses that pose such a challenge to developers today. There were 248,000 American public schools in 1930; today there are 99,000. A century ago, as reformers consolidated schools in an effort to stamp out scholastic parochialism, smaller communities, robbed of an institutional, social and economic cornerstone, did everything they could to stop the process. But then, as now, they were helpless. Those schools were absorbed by the city and forgotten or simply demolished.

It is unlikely the current crop of schools, aging, enormous, and sometimes dilapidated, will fade so easily into the urban fabric. Reasons for closure and possibilities for rehabilitation remain closely tied in a way that frustrates cities’ efforts. Growing enrollment in charter schools, which has tripled nationally over the last decade, has sapped students (and money) directly from public schools. And when public schools shut down, charter schools are the beneficiaries, occupying over 40 percent of repurposed public schools in Pew’s study. Some cities, like Chicago, wary of this cyclical process, have barred future educational uses for schools for decades after sale.

Similarly, the declining populations that precipitated school closings make many buildings unlikely candidates for residential reuse, whether as condos or senior housing. In the Kingsessing neighborhood around Anna Shaw Middle School, for example, population has decreased by 19 percent over the past two decades, from 80,000 in 1990 to 65,000 in 2010. Even as Philly has turned the corner from a half-century of population loss to grow again, the population of West Philadelphia continues to fall, from a peak of 330,000 in 1950 to 200,000 today.

There are well-publicized cases of innovative public school reuse: heritage centers, business incubators, gyms, hubs for tech start-ups, training facilities, and in Portland, a hotel-cum-movie-theater-cum-restaurant. Seattle’s Queen Anne High School, which turned residential in the 1980s, was sold as condos in the mid-’00s for tens of millions of dollars. (Some feel the city made a bad deal on the transaction.) West Philadelphia High, which is being sold to a New York developer, will soon be transformed into housing. In some cases, the land is valuable enough that architectural conversions are unnecessary — Philly’s Wanamaker School has been demolished to make way for a $100 million housing project. But such successful transitions require an unlikely confluence of factors: a thriving neighborhood, a design conducive to adaptation, and developers willing to take something of a gamble.

On a Wednesday afternoon in the marble-lined lobby of Anna Shaw Middle School, a site visit for potential buyers was a quiet affair. A representative from Mastery Charter was there; the only other party was Rashan Jibowu and Aaron Tjoa of the School Redevelopment Initiative (SRI). The SRI, which began as a graduate school competition entry, aims to bring socially conscious development to public school reuse, or in simpler terms, ensure that one of these schools continues to be an asset to its community. After consulting with residents near closed schools, the group wants to pioneer a mixed-use adaptation that would highlight health services (clinics, gyms, fresh food), education (vocational training, daycare) and community space. They believe such a balance, tailored to neighborhood needs, could be financially self-sufficient.

If it works, it will be an example. But it will also be only one school among dozens, in one city among dozens. Cities cannot afford to spend time devising careful solutions or courting developers; even on a closed school, maintenance can cost hundreds of thousands of dollars each year. There’s insurance, and the liability if something goes wrong. Many schools can be purchased for less than the price of demolition. And so cities like Philadelphia have rushed closed public schools to market.

In December, not six months after the last bells rang, the city will begin examining proposals to purchase seven schools in which there has been “demonstrated interest.” This is the expedited sale list; it includes Anna Shaw Middle School and University City High School, the latter of which is expected to be one of the district’s few lucrative sales. (Nobody’s quite sure what these properties are worth; in other cities profits have inevitably fallen short of expectations.)

But the second list of properties – those not thought likely to sell quickly – is long. One in three Philadelphians lives within a half-mile of a closed school. What will become of stately Germantown High, with its neoclassical colonnade, which turns one hundred next year? Who will use its 350,000 square feet of floor space?

These are questions Philadelphians will be confronting for years to come.