"Servants": Behind the scenes at real-life Downton Abbeys 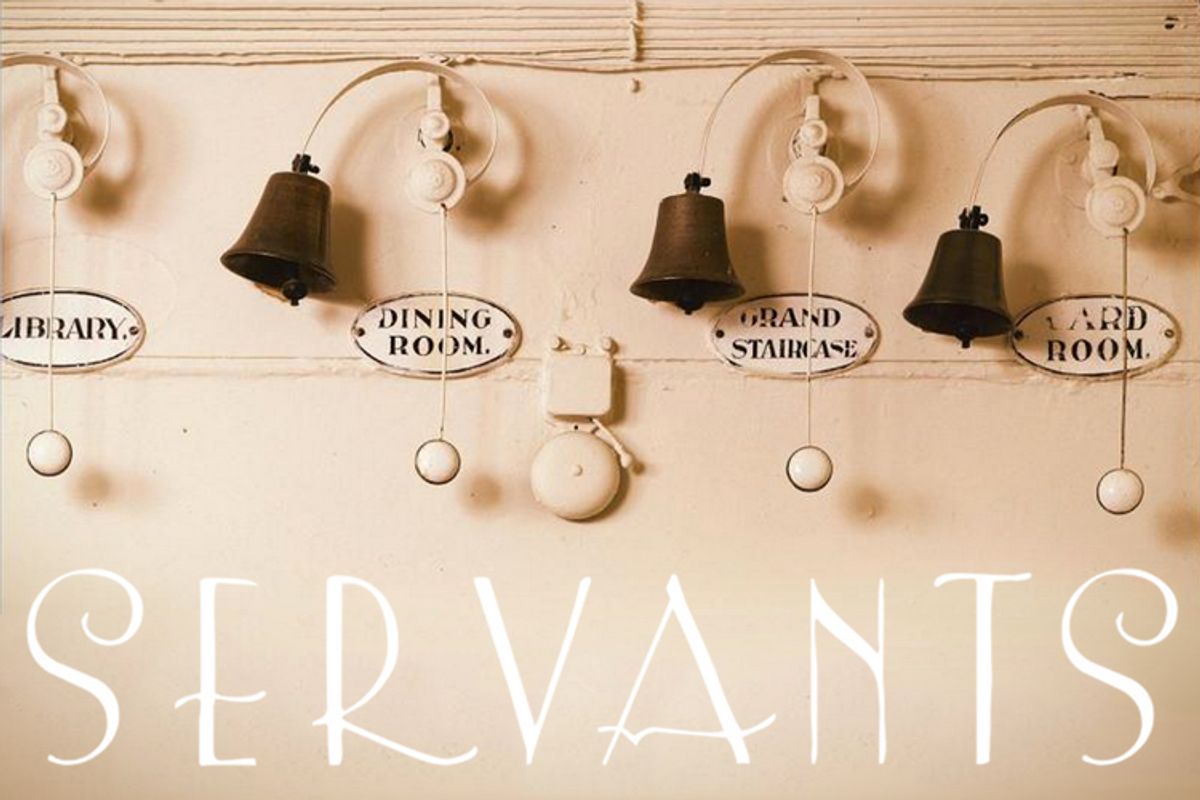 It is a truth seldom acknowledged that few subjects fascinate as consistently as the peculiar domestic and social arrangements of other cultures, particularly when those cultures are in many respects similar to our own. This is part of the allure for American fans of "Downton Abbey." That popular television program is never once mentioned in Lucy Lethbridge's ridiculously diverting new book, "Servants: A Downstairs History of Britain From the 19th Century to Modern Times," although it is surely in some part responsible for the book's publication -- and so close to Christmastime, too!

This is a saga that begins with the Duke of Bedford having his newspapers and shoelaces ironed every morning, like the head of any substantial Edwardian country house, and ends with a photo of his grandson cheerfully loading one of the first mechanical dishwashers with his own hands. It's also a story of men and women (but mostly women) who spent much of their lives toiling in gloomy basement kitchens, where the humblest members of the establishment also sometimes slept, or of maids who, if they dusted furniture for the Duke of Marlborough, were expected to turn their faces to the wall whenever he entered the room.

And it's also the story of a shepherd for one Miss Bruce of Oxfordshire, who in 1966 kindly if uneasily joined his elderly employer for an afternoon drink, in spite of his desire to get back to his flock and his reservations about consuming alcohol in the middle of the day while surrounded by "valuable knick-knacks." "I didn't like thwart her," he explained, for "it were part of the grandeur of her Scottish childhood" and "her were getting a bit wandery." She seated him next to a silver ornament shaped like rams' horns, "so you'll feel at home."

Lethbridge has based "Servants" on a wealth of primary sources -- there was a mania for memoirs by retired country-house servants in the 1970s, when another television show, "Upstairs, Downstairs," captured fans on both sides of the pond. Lady journalists also routinely went undercover as housemaids and nannies during the early years of the 20th century, reporting on what was generally referred to as "the servant problem" (aka, why is it so hard to get good help these days and why do they have such bad attitudes?). Other sources include advice columnists and authors addressing anxious middle-class women who knew that the employment of servants epitomized genteel life in Britain but who weren't always sure how to negotiate the relationships that came so naturally to their "betters." One of the most striking features of such books, Lethbridge writes drily, "is the way in which those who employ domestic help view housework in the light of a moral endeavor for people poorer than themselves."

Many servants hated their lot, from the mob caps that many maids were expected to wear when they left the house on errands to the way their employers treated them as if they were furniture to the stigma they bore among their working-class peers, who disdained them as "slaveys" willing to bow and scrape for a living. Yet in 1900, Lethbridge reports, "domestic service was the single largest occupation in Edwardian Britain."

Households that could easily afford such improvements as electric lighting, vacuum cleaners, central heating, even hot and cold running water, disdained them in favor of old-fashioned, labor-intensive ways of meeting the same needs. Virginia Woolf's father remarked that he had no reason to install hot water in his London house when it was easier and cheaper to hire maids to heat and carry bath water upstairs. (The average maid in a small household "would carry an estimated three tons of water a week.") The resulting conditions -- deplored as dirty, shabby and uncomfortable by visiting Europeans and Americans -- were regarded by the English as a sign of superior class because of their association with the landed gentry. The classic large country house represented a way of life imbued with great national romance and entailed large retinues of help, from full-time laundresses and gas-lamp tenders to the "gong man" recalled by Lady Diana Cooper, a decrepit retainer whose sole occupation was to walk the vast, chilly corridors of Belvoir Castle in Rutland, banging a gong to summon the residents to meals.

"The idea that English society was bound by a complex and essentially benevolent social web that held the classes together in mutual co-dependency was one of the most potent myths of Edwardian England, at a time when inequalities were in real life stark," Lethbridge writes. Even the servants themselves -- once they retired, at least -- could be sentimental about working in places like Downton Abbey, big houses with tight-knit communities of domestic staff and old-school masters and mistresses who, it was often felt, instinctively knew the proper way to treat them. The food at such establishments, produced by the estates' own farms, was typically excellent and abundant. Besides, Lethbridge observes,"every example of oppression and ill-treatment on the part of employers can be countered by another of reciprocal friendship and loyalty." The impression left by "Servants" is that domestics working for middle-class families were most discontented, partly because they were more likely to be overworked and underfed, but also because social insecurity led their employers to behave with greater haughtiness.

Lethbridge recounts the growing discontent with the old social order, boosted by each of the big wars and the increasing unwillingness of working-class Britons to accept the lowly status accorded to domestic servants. (Today, what jobs remain in the sector are mostly held by immigrants.) Various legislative efforts to regulate working conditions and secure rights for domestics are accounted for in "Servants," as well, which, along with Lethbridge's tartly ironic prose, gives the book a spine of social conscience.

Like everyone else, probably, I am most enthralled to learn that butlers seldom married and were prone to drinking problems (since they were in charge of the keys to the wine cellar), and that chauffeurs were considered dashing and sexy by the housemaids while valets were decidedly not. But I don't want to feel that my most craven voyeuristic desires have been too indiscriminately catered to, and "Downton Abbey" stoops far too often to conquer my reservations in that department. "Servants," however, resembles the very best butler by retaining its dignity while expertly delivering the literary equivalent of what Bertie Wooster, in his far-from-infinite wisdom, might have called "the needful." Most gratifying.