No, USA Today: "Sex drives" have not blurred the definition of rape

Jonathan Zimmerman is right to note we've made progress around campus assault, but we have much further to go 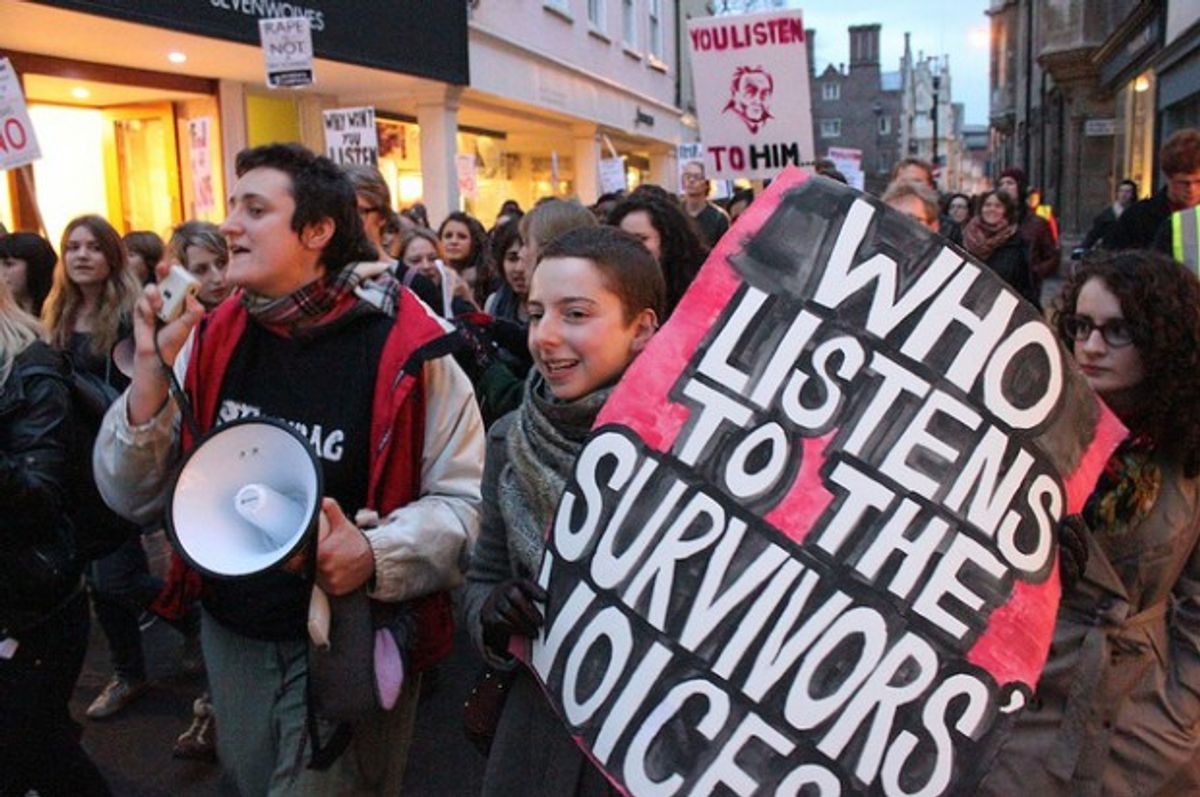 Zimmerman reported on sexual assault as a young editor at his college newspaper, and observes that a lot has changed since he was an undergraduate covering these crimes three decades ago. And in some ways, he's absolutely right. Many Americans are more aware of the prevalence of sexual assault and rape than they were in the past, thanks to decades of work done at the cultural and policy levels by feminists, advocates and survivors of sexual violence themselves.

But Zimmerman is wrong to suggest that it is "impossible" to imagine anyone today "openly defending" the kind of sexual assault he witnessed -- and was, rightly, outraged by -- all those years ago.

Students in Steubenville, Ohio, boasted that the 16-year-old victim in that now-infamous case was "so raped" after photos of her assault began circulating online, while the media speculated wildly about whether or not the girl's level of intoxication was tantamount to asking to be assaulted. And the reprehensible behavior and obstruction of justice didn't end with the teenagers; on Monday, four adults were indicted for interfering in the investigation and tampering with evidence. During a recent Fox News segment on the alleged sexual assault of a 15-year-old high school student in Maryville, Mo., a criminal defense attorney said the young girl in the case should have “expected” to be taken advantage of since she had been drinking around teenage boys late at night. (Opinion pieces from Slate, the Washington Post, the New York Daily News and elsewhere echoed the sentiment.) And this week in Tallahassee, Fl., fans of Florida State football enthusiastically rallied behind an athlete accused of sexual battery, despite an ongoing investigation (which police allegedly warned the young woman not to pursue, lest her life be made "miserable") and the real possibility that charges will be filed.

Trying to count every recent example of how our culture continues to defend, excuse or deny the widespread occurrence of sexual assault at the expense of victims is a really easy way to ruin your afternoon, so I will leave it at those.

And contrary to Zimmerman's belief that we have moved past the time when "female students still had to walk a delicate tightrope" in which "keeping chaste could alienate your date, but having sex might harm your reputation," women are still expected to be just the "right" amount of sexual to stay on the "good girl" side of that line. (But good luck trying to strike that balance, because it's a moving target.) We haven't moved nearly far enough away from thinking that only "bad girls" have sex, and punishing these women -- with stigma, with scrutiny, with accusations of being false victims and with terrible miscarriages of justice in failing to prosecute crimes committed against them -- accordingly.

Zimmerman misunderstands the progress we've made as a sign that we have nowhere left to go in how we talk about and prosecute sexual assault. He's very, very wrong about that.

Zimmerman asks, by way of conclusion, about the apparently new sexual mores that make identifying rape so "complicated" in the modern context. When, he wonders, does a "bad hookup" becomes an assault, now that women are given greater social permission to be sexually active? "It's all fine and good to say that no means no," he says. "But what does that mean in practice, when so many young people are encouraged to say yes?"

While sexual coercion and the shades of consent that result from it are very real (and must be addressed by sex education that makes explicit the importance of verbal and non-verbal consent, among other issues of sexual autonomy and awareness) -- these things are not new. And the boundaries of "when no means no" have not shifted over the last 30 years, contrary to what Zimmerman may think.

A lot may have changed in the 30 years since Zimmerman was an undergraduate, but these things certainly have not.