Conservative think tank appalled when guys with MBAs take over 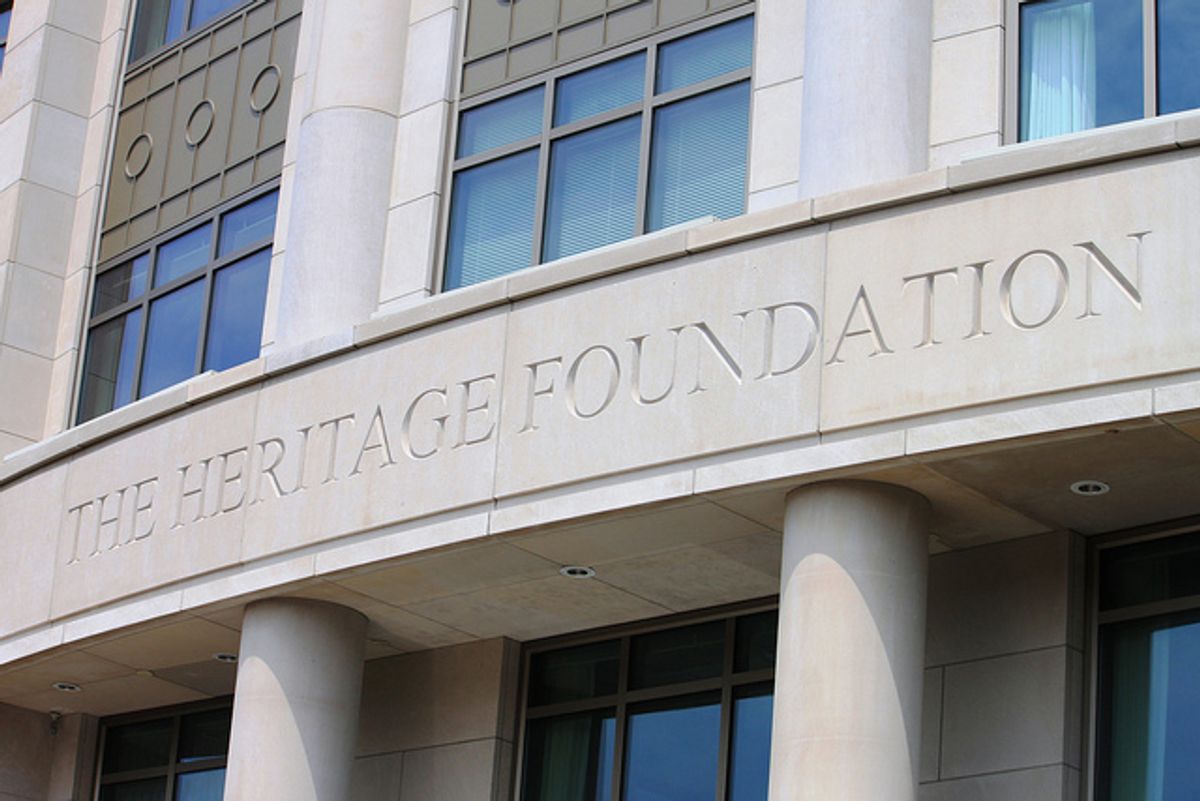 Julia Ioffe has a piece in the New Republic explaining the recent history of the Heritage Foundation, once the most influential conservative think tank in Washington, D.C. -- perhaps the most influential think tank of any kind anywhere, for a few years -- and now essentially a very large email list and activist PAC/pressure group.

Many people noticed how much the organization had changed during the recent government shutdown/"defund Obamacare" fight, a giant waste of everyone's time and general self-inflicted disaster engineered and designed by Heritage Action, the 501(c)(4) "pressure group" Heritage launched in 2010. On the right, there was much consternation over the direction this once-respected think tank had taken. Truth be told, Heritage was always mostly political hacks, they just used to be effective political hacks with a realistic agenda. What was different now was the cheerful absense of any coherent and/or achievable goal -- beyond fundraising and image-boosting for Heritage Action itself. Many blamed this on new Heritage president Jim DeMint, a former congressman not particularly known for his intellect, but Ioffe says the new tone at Heritage, and the tactics of Heritage Action, were both largely directed by Michael Needham, a 31-year-old former Giuliani staffer brought on to be the CEO of Heritage Action when it launched.

Needham is a child of privilege, the Manhattan-raised son of a banker and a Saks executive. Basically the minute he was hired to run Heritage Action, he began acting like any up-jumped MBA with an executive position. He and his lieutenant, "a 31-year-old evangelical named Tim Chapman who had a few years experience working on the Hill," promptly took over the organization, assisted by DeMint, who took over as president when his kindly old predecessor retired.

“I was always struck at how they felt absolutely no intellectual modesty,” says the former veteran Heritage staffer. “They felt totally on par with people who had spent thirty years in the field and had Ph.D.s.”

Hmm. Why shouldn't they? What good is a Ph.D. compared to the education received by an MBA with a useful business degree?

Since Needham and Chapman and DeMint have been in charge, a number of scholars and academic think tank types have left the organization, presumably distressed by the new regime's management methods. Those methods do sound quite annoying, though:

DeMint also shared another bond with the two men: unlike the Heritage ruling class of yore, none of them had Ph.D.s. All three, however, had MBAs. Their preference for incentivizing behavior on the Hill with scorecards and primary challenges was “a very MBA approach to politics,” the former scholar noted ruefully. “There’s really no room there for deliberation or argument.”

Once he took the helm, DeMint set about reorganizing the business. Under Feulner, the Heritage Foundation ran as a decentralized confederation of so-called research silos—health care, national security, education—whose staffers each focused on a specific area. DeMint instituted a system of multidisciplinary teams that sprung up depending on the issue of the day that Heritage happened to be pushing. Moreover, now a Heritage staffer’s career trajectory was tied to the success or failure of that team.

You mean ... compensation and advancement were tied to performance? That sounds like standard corporate management best-practices to me. It also sounds like something Heritage has spent years trying to implement in public schools.

Yes, what happened to Heritage -- what has old Heritage hands appalled and quitting or talking to liberal New Republic reporters -- is what Heritage has long argued should happen to basically all large American institutions, from the schools to the government to corporations. They are gutting the place and remaking it according to business school rules divined from decades of corporate consulting and leveraged buyouts. The overpaid, underperforming old-timers obviously don't like it, but the new Heritage is more efficient without them.

It's just interesting how so many of them object to being at the mercy of some business school assholes with no respect for credentials or experience, though. I mean, take it from this inspiring Heritage Foundation ode to the wonderful work of private equity firms, which "make something busted luster again," mostly by firing everyone: "Whatever the problems, if under the flaws remains something of real value, then with the right tools, that value can be brought to the surface again." Your think tank just had to be destroyed in order to find what was of real value, which turned out to be, I guess, your email list.