Kwon talks to Salon about how the band preps for their physically demanding shows, and his own artistic process 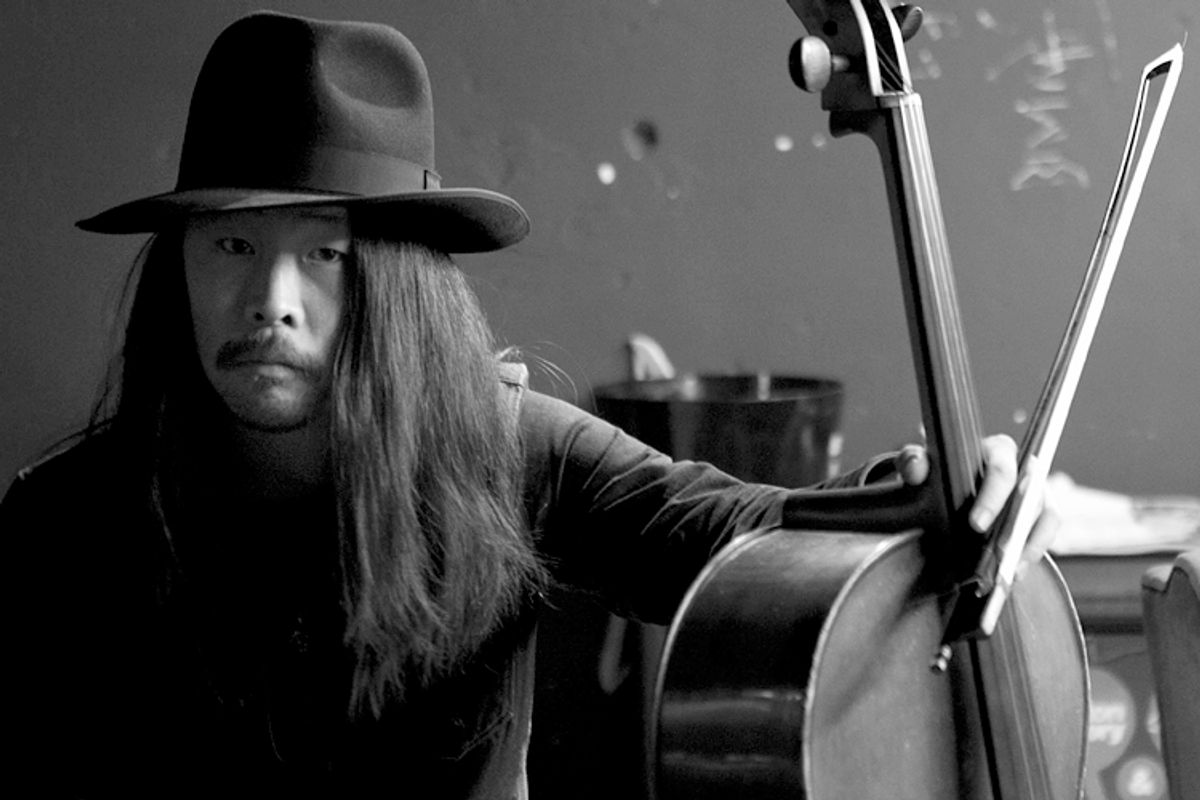 The Avett Brothers released their eighth full-length album, "Magpie and the Dandelion,” on Oct. 15, and it debuted at No. 5 on Billboard’s Top 200 Albums Chart. Rick Rubin, who has worked with artists from Mick Jagger to Jay Z, produced the record, making it his third album with the band. With influences of country, bluegrass, rock 'n' roll, folk and punk, the Avett Brothers play a style of music most commentators label as Americana.

Unique to the band’s sound and character is cellist Joe Kwon, who was born in Korea; grew up in High Point, N.C.; graduated from the University of North Carolina in Chapel Hill; and now lives in Durham. A few days before the Avett Brothers planned to perform on the “Late Show With David Letterman,” Joe found time to speak with me about the band’s new album, his passionate command of the cello, his artful endeavors in food and photography, and his new love of woodworking.

The Avett Brothers led a revival of Americana music with their debut full-length album in 2002, "Country Was," and established their sound as part of the future of the genre with the 2003 release "A Carolina Jubilee." How have you seen this type of music evolve in the past six years?

I don't think it actually started with us. I think it was something that was in the works well before us. I'm talking about going back into the early '90s. I feel like all of it was leading up to something. There was a part that was missing with the wider spectrum of people listening to music. I'm the prime example of someone who really did not dig to find new music as a kid. The only music I was subjected to was anything that was on the radio or given to me by my friends. These were bands like Pearl Jam and Green Day. In a lot of ways, I wonder if they thought of themselves in the same way we do now. Were they a new kind of music? I don't know. It’s difficult for me to think of it in those terms because I'm in the band. For me, it’s so much a part of being onstage and going to work. I mean “work” in the best sense. I love what I do. It doesn't ever feel like work.

The Avett Brothers recorded their new album during the same sessions as their last album, the Grammy-nominated "The Carpenter," which the band released 13 months ago. Recording two albums at the same time inevitably leads to similar forms, sounds and themes. How did the band separate the two records?

I'm not too involved in the sequencing process, but I do hear what the guys say based on the songs. A lot of these songs, oddly enough, are more relevant now than they were back when "The Carpenter" was released, which is kind of odd. In a lot of ways, the content of the songs dictated it with everything going on, especially with the personal lives of the band. A lot of the new songs are a little bit darker, but "Magpie and the Dandelion" was filled with a lot of hope. Without going into detail, it has to do with everything that's been going on with Bob. No matter how terrible the situation is, there's still a lot of hope behind it.

You're known, in particular, for your stage presence and the intensity with which you perform. Have you always played like this? How do you maintain this ferocious bond with your instrument?

Before I joined the band, and during my first show with them, I sat down onstage to play for about 30 seconds. That was in 2006 and at Lincoln Theatre. That was all I could take. I thought, "Yep, I got to stand up.” I remember thinking, “I can’t sit here. They're going nuts! I can’t just sit here.” I stood up right then, and it worked. It ended up being what I'm known to do now, which is unfortunate for my back.

Your music is perhaps what most people know about you, but that art is only a fraction of what comprises Joe Kwon. You share your other art — cooking, eating and photography — on your website, Tastes on Tour, which commands quite a large audience. You host a supper club at your home in Durham, collaborate with acclaimed chefs on menus, and advocate for sustainable food practices. Where did your interest in food come from?

I grew up in a house and in a culture that very much based itself around meals. The family get-togethers were not just family get-togethers — we had amazing food that everyone prepared, and it seemed like each family had a specialty. My mom had so many. I'm trying to think of an iconic one. There's a Korean dish called tangsuyuk, which is like sweet-and-sour pork. There were my aunt's egg rolls and my other aunt's kimchi. It became part of this fabric that was consistently in all of our family get-togethers — the good food you knew you were going to get.

They’re just passions in general. Having that kind of ferocity about anything — it could be my food or it could be about playing — I get really deep into something when I choose to do it. I recently picked up woodworking. I remember being on tour, and every off moment I got, I thought about different designs of what I planned to make, learning about every tool, and learning about technique. I just love learning about the process of doing things with my hands.

It's also not unusual to see a 35-mm Leica on your shoulder. How do you reconcile your love of film with your prolific Instagramming?

The photography thing, oddly enough, spawned from my father who really enjoyed photography growing up. He never did any photography other than just taking family pictures. I was lucky enough to be given the chance to go out there and explore that realm and get into it. In high school — I went to a private boarding school in California — I took a photography course. I loved it, and I just kept doing it. I never planned on doing anything with it, and I still don't. I considered putting my prints online for people to purchase, but it’s not something I've really given a lot of thought because I just do it for myself and to keep track of everything. It's just a hobby.

And I wish I carried my Leica everywhere. I do carry it to a lot of events because I feel I’m more likely to get a shot that I really love and that I can hopefully put on my wall or something. I was really into the digital world. All of my food shots are digital because they’re just easier. I just started to get to the point where I was like, "Oh my God, so many unnecessary pictures.”

Back in the day of film, you really had to take your time, and in the world of the antique Leica, there's no focus or light metering. You really had to take the time because each shot had to be posed, and each shot had to be focused and refocused. You also had to get a light reading. It was something unprocessed. I just really love slowing down, finding the shot, and taking it. Even when you've taken it, you don't know if it's a good shot until you go and develop your roll of film. It became something like the idea of delayed gratification. I became addicted to the, "Oh, I wonder how that shot is going to turn out?" I have a lot of great moments on film. Because they are on film, they are more important to me somehow. Obviously, this is isn't true, but it just feels that way.

You've told stories for the Monti, a North Carolina version of New York's the Moth. Can we ever look forward to your stories in print?

That was purely Jeff Polish's idea. I really had never done anything like that. Jeff Polish dragged me out of my comfort zone to do that. I didn’t think I had something worth telling. I don’t find myself to be that interesting. I just go about my business. Jeff spoke to me, and he started to make me think, “You've got a story there. You don't think you do, but you’ve got a story there.”

He really helped me to figure out what the story was and held my hand along the way. If you speak to my girlfriend, she'd tell you I am a purely internal guy. I internalize everything. I don't put my feelings out there. I don't talk about them. That's just who I am, and for me to do something like that was very far-fetched. It was a lot of fun. Maybe I’ll do it again someday, but it was definitely outside my range of comfort.

The band says it chose "Magpie" for the record's name because "you can see them everywhere, and they've got this strange grace." Where do you find the strange grace in life?

I am the most grace-blessed person onstage, in terms of playing, but the instrument in front of me brings all of the grace. I am a total graceless oaf. In terms of off the stage, I've always been told that I'm a very specific, non-wasteful mover around the house and the kitchen. I find the grace and beauty in anything that requires a process. I love the process. I love slowing down and learning something. Even when I do something fast, I do it as minimally and efficiently as possible. I guess I find the grace in efficiency.

Win Bassett’s writing has appeared in The Atlantic, Los Angeles Review of Books, The Paris Review, Nieman Storyboard, and elsewhere. He serves as contributing editor to the Marginalia Review of Books, managing editor of Yale’s LETTERS journal, and assistant for Bull City Press. He’s a former assistant district attorney and serves on the PEN Prison Writing Program Fiction Committee. He’s from southwestern Virginia and is a seminarian at Yale Divinity School.