Bring Brian back to "Family Guy"!

Brian the dog elevated the show's humor to actual social commentary. Killing him off was a huge mistake 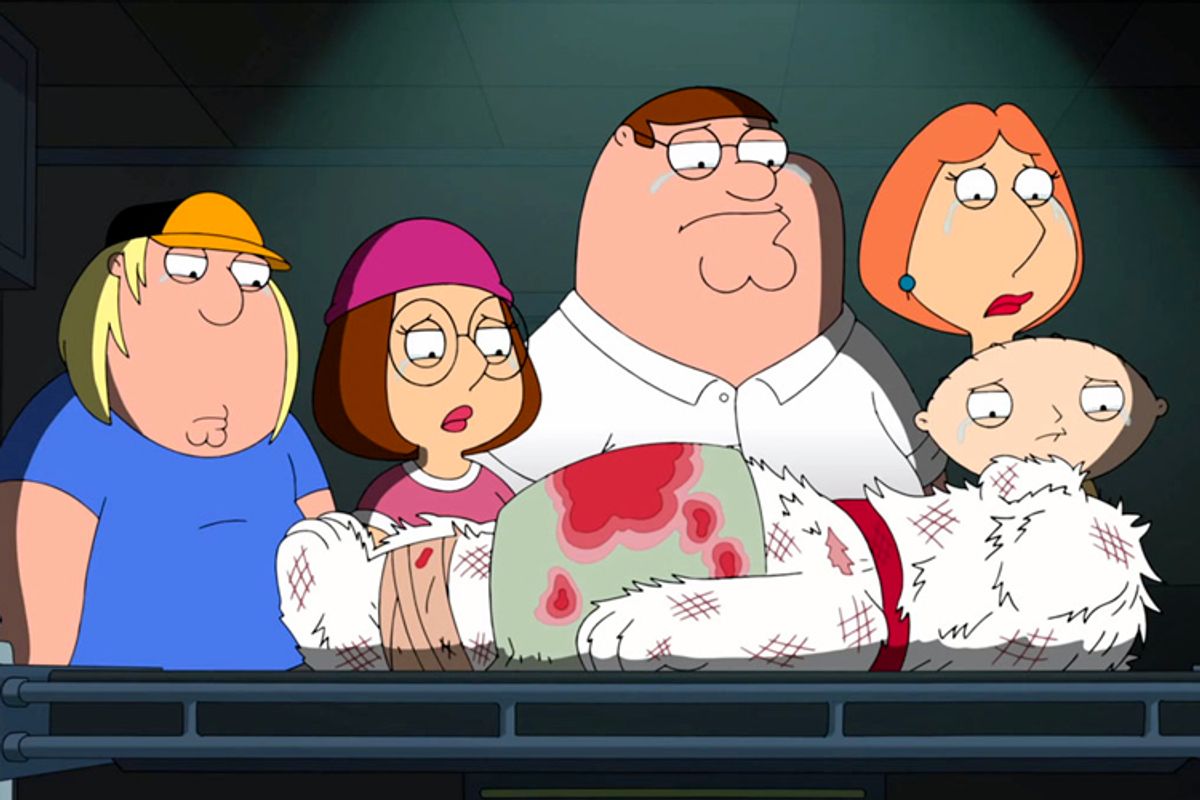 Killing off a sitcom’s main character, midway through the show’s run, is awkward. It’s a weird juxtaposition, injecting something tragic into a show that is engineered to get the highest number of laughs per minute. It’s usually not the producers’ decision either – nine times out of 10, it’s the result of an actor either dying or quitting the show. When the producers of "All in the Family"/"Archie Bunker’s Place" killed Edith, it’s only because Jean Stapleton quit, and the show(s) suffered greatly from her absence. John Ritter’s death was actually incorporated into "8 Simple Rules" via his character’s death, and it was a rare instance of touching closure, for both the fans and the characters on the show.

Knowing that death, and its permanence, is such a buzzkill for a comedy audience, a sitcom will take great pains to avoid it, often recasting parts rather than ending them (as they did with Aunt Vivian in "Fresh Prince of  Bel-Air"). Sitcoms also rely on their audiences’ poor memories – when the actor who played Judy Winslow left "Family Matters," the show just pretended that she never existed – all of a sudden, Carl and Harriette had two kids instead of three.

It makes this past Sunday’s "Family Guy" all the more notable – a main character died on-screen – because off-screen, there was no actor’s unexpected death, no fallout between an actor and the show’s producers. Instead, the death was a “fun way to shake things up” – a tone-deaf, short-sighted motivation, even for a show that prides itself on callousness and lack of taste.

Brian Griffin – beloved pet, chronic alcoholic, failed writer – is now dead, crushed under the wheels of a Prius. The show’s producers had warned the fans, months ago, that a main family member was going to die, but most people’s bets were on Meg or Chris. Even Lois would have been a better choice than Brian; a bachelor Peter would have made for some darkly hilarious story possibilities.

Brian wasn’t always a complex character.  He was a mere caricature at the beginning of the show, just like the other characters – Peter was the slovenly father, Meg was the misunderstood teen, Joe was the hero cop. Brian was the dry, impassive voice of reason, serving as Peter’s conscience during moments of stupidity. Seth MacFarlane, the creator of the show, voices three main family members – Brian, Peter and Stewie – and it’s no surprise that MacFarlane’s regular voice most closely resembles Brian’s. In the early days, Brian was MacFarlane’s stand-in, the character that expressed a final, authoritative say on any contentious point. Brian was a bit wooden, but he was functional as a plot device.

Brian gained steady characterization, however, as the show progressed. He was someone who aspired to be a famous writer, yet possessed none of the necessary talent. He had an alcohol problem, but rationalized it as a fashionable quirk. He dated airheaded women like Jillian, because they were non-threatening. He was an absentee father to a teenage son. He had severe abandonment issues. He contemplated killing himself. There was a whole subversive psychodrama going on with Brian, and it interlaced well with Stewie’s time and space travel and Peter’s non sequitur shenanigans.

Brian also provided some of the show's most pointed criticism of America's conversation on race. He was the perfect satire of a "progressive only in name" – of someone who preached his tolerance a bit too loudly for the benefit of others, and whose actions betrayed a latent prejudice:

In another episode, Brian dated a woman of color, and could only relate to her in regards to her skin color. The joke was again squarely on Brian – his need to impress and be seen as tolerant revealed his bigotry. "Family Guy" often uses easy stereotypes for cheap laughs (to its detriment), but this was a good example of how Brian’s character elevated the show’s satire:

As the seasons progressed, Brian became less and less sympathetic; the dissonance between his professed intellectualism and underachiever status was increasingly pronounced. Even his left-wing political views, which were once the moral center of the show, were shown to be nothing but artifice – in one, memorable episode, Brian began worshiping Rush Limbaugh, following the strongest personality in the room rather than adhering to any true moral principles:

It’s ironic that Quagmire, of all people, was the one who called out Brian’s BS, in a rant that blasted slacker, "Stop Kony" pseudo-activism. It’s a not-too-gentle reminder to self-identifying progressives to actually live the progressive values they claim as their own:

One would hope that Brian’s death is not as permanent as the show’s writers are making it seem. Brian provides the last bit of emotional heart and wit on the show – a necessary counterweight to the increasingly bizarre, overlong cutaway gags. Brian perfectly caricatures the namedropping, martini-drinking, pseudo-intellectual that sits in every college English class, the "activist" who talks big, but doesn’t do the necessary legwork to bring about change. Bring back Brian. He’s unique, and culturally, he’s needed.