5 shows to binge-watch this holiday weekend 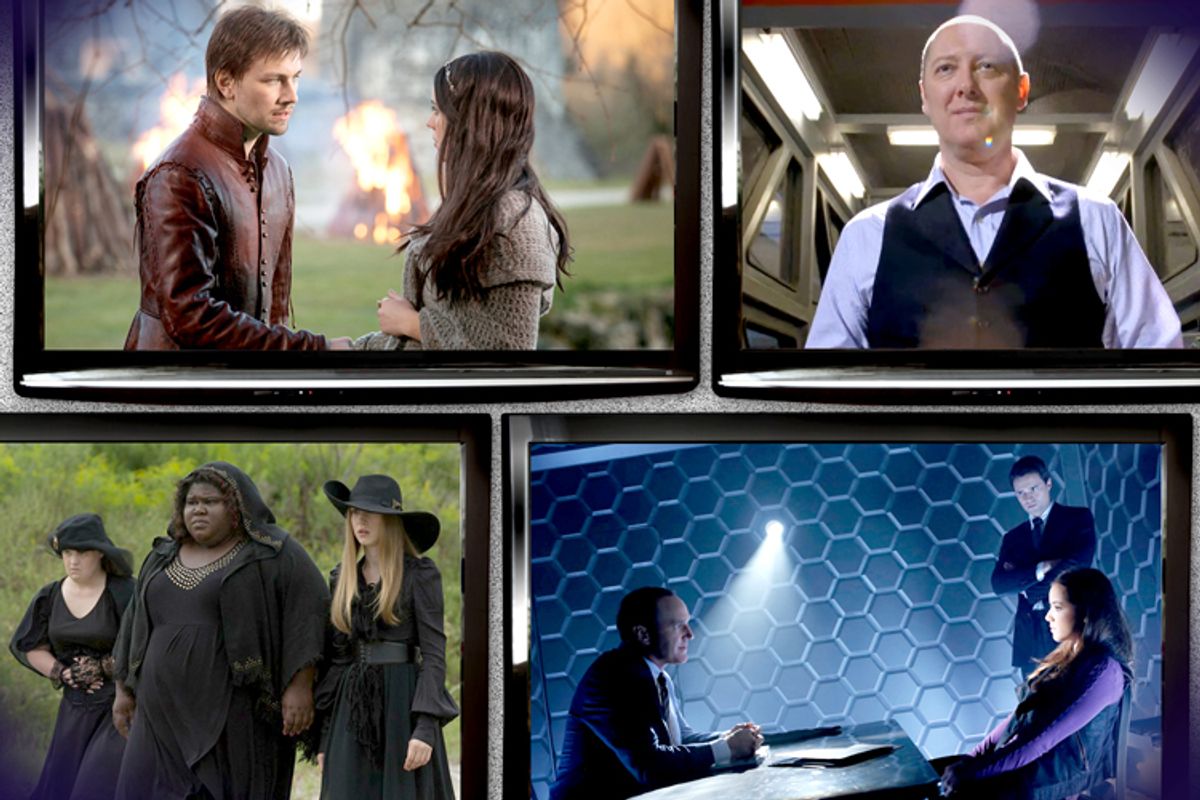 Tomorrow is Thanksgiving. For many, that implies a long weekend spent among friends and family. Regardless of how much you jibe with your loved ones, there typically comes a time when you run out of things to talk about -- or run into things you cannot talk about. Either way, one solution is to stuff your face silent with food. Another, far less fattening fix might be to binge on fun, distracting television for as long as necessary. What follows is a short, pumpkin-pie-sweet list of recommendations -- shows that may serve to sustain the holiday spirit.

(Note: In this space, I've been a big proponent of established, continuing fare like "The Good Wife" and "Boardwalk Empire." But, for the purposes of this list, I'll focus on shows that are either in their first season or in a self-contained season so that there are little to no boundaries to entry for whomever you happen to be watching alongside. And, if you're spending the holiday alone... Well, I wish I had time to compile a list of holiday cocktails as well.)

This innocuous and overly cute sci-fi action serial is ideal for viewing in pleasant company for one very important reason: familiarity. Chances are someone in your circle has seen "The Avengers," "Iron Man 2," "Thor," or at least one of the affiliated blockbuster motion pictures in which Agent Phil Coulson has appeared. Anyone familiar with Coulson knows S.H.I.E.L.D., the type of super-charged villains that the covert government crime-stopping agency is likely to pursue, and many of the specifics of the contemporary Marvel Universe with which the show is littered. Also, Clark Gregg is a veteran TV actor familiar to fans of "The West Wing" and "The New Adventures of Old Christine." His signature dry delivery is ramped up to 10 here and sprinkled with an intriguing awkwardness.

As notorious global crook-turned-FBI snitch Raymond "Red" Reddington, James Spader turns in the stand-out network television performance of this fall week after week. The show has its drawbacks: It's a procedural in which new bad guys are stalked and captured every episode. Not every one of these pursuits feels worth your attention. Also, the once-promising co-lead Megan Boone, as doe-eyed federal rookie Elizabeth Keane, has grown a bit directionless -- and possibly superfluous -- in recent episodes. But Spader's gleefully sinister, unpredictably vicious Reddington is the immoral glue that holds it all together. Be forewarned, however -- this series boasts a good bit of blunt-force violence. So clear the living room of the young and easily impressionable.

If you've only seen commercials for this program on the CW, rest assured that it is not a cloying, annoying teen melodrama about a clan of angst-ridden vampires. It is, however, most definitely a teen melodrama, and sometime sickly so. But it is also historical fiction, which gives the show some added value in a family setting. If you're prepared to see historical figures like Nostradamus and Prince Francis II cast as scruffy pseudo-hipster studs in tight-fitting period costumes, you may be able to shoehorn in an educational Wikipedia search or two and possibly some discussion of the actual history of Mary, Queen of Scots. And, if you're superficial and own a big enough TV, the show could double as set dressing for your own banquet; "Reign" is loaded with lush decor and plenty of corseted eye candy dashing about.

This recommendation differs from the previous entries on the list in that it may encourage familial conflict. You may not know names like Colton, Rupert and Gervase from the past 26 cycles of CBS's long-running reality competition show. But if you have any relatives at all, you've probably experienced the occasional desire to pummel your older brother with the thickest of beanbags, trump your wife or girlfriend at a game of skill and brag mercilessly about it, or knock your millennial offspring into the ocean. This season's "Survivor" pits returning players against their own loved ones, setting the stage for extreme airing of dirty laundry, resolving of long-held gripes, and stabbing of backs. Watch and empathize -- or envy.

If your holiday plans are decidedly adult -- or goth -- this is the perfect meal upon which to gorge uncontrollably. "AHS: Coven" is campy, gory, outrageous and addictive. The extreme sexual situations make the show highly inappropriate for watching around children and all the more thrilling once the little crumb-snatchers are safely in bed. The frank depictions of America's recent history of race relations and violence make it worthy of heated debate among the sociopolitically aware. The performances by such luminaries as Kathy Bates, Angela Bassett and Jessica Lange make it credible. And the sacred cow-skewering humor makes it great for a guilty laugh among slightly-sauced friends.