When celebrated literary novelists revive classic heroes of popular fiction, the results can be surprisingly good 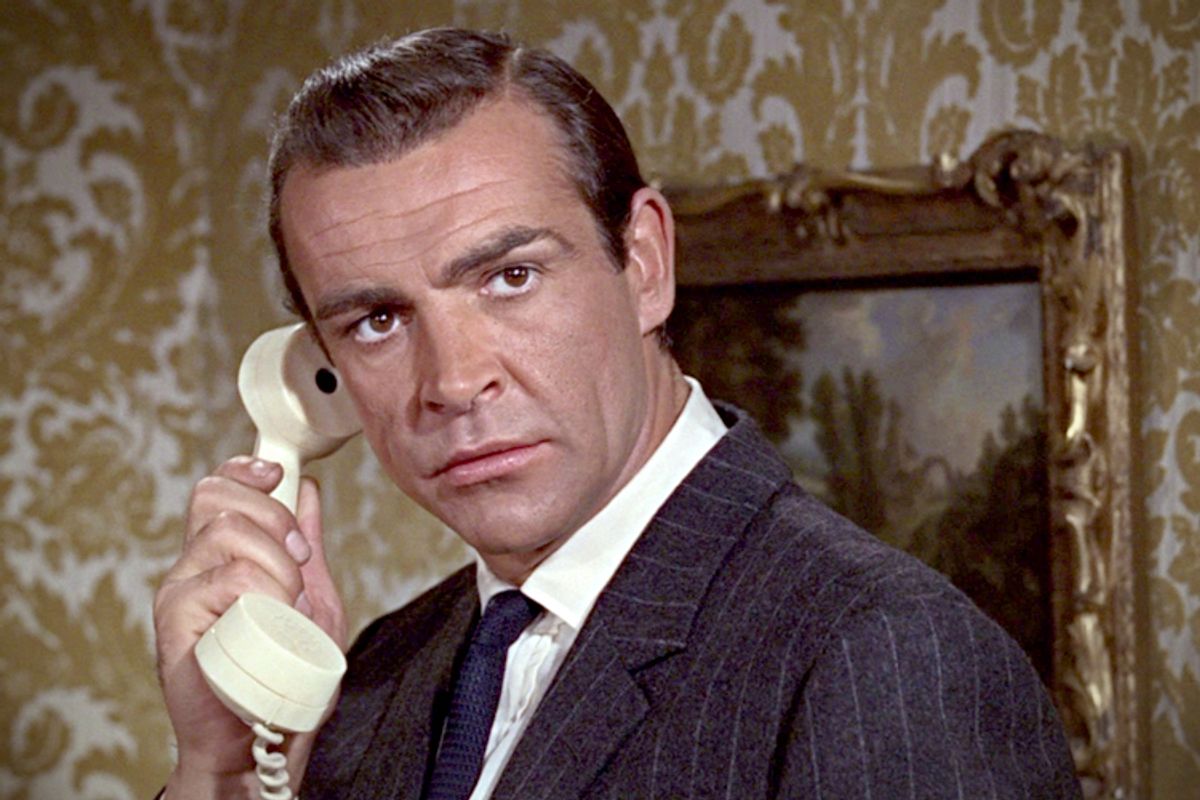 When we love characters in popular fiction, we really, really love them. We dress up like Scarlett O'Hara or Harry Potter on Halloween, we make pilgrimages to Baker Street in search of 221B, we join groups dedicated to the admiration of Batman and ask ourselves over and over again what Holden Caulfield would do. In the case of series fiction, the creator of such a character often tires of him or her long before the public does, as happened to both Sir Arthur Conan Doyle and Agatha Christie, who grew well and truly sick of Hercule Poirot and his little gray cells.

And, finally, inevitably, we run out of books. Even the singularly prolific P.G. Wodehouse was only human, and sad is the day when the devotee of Bertie Wooster and his gentleman's gentleman, Jeeves, finishes the very last unread volume of that immortal oeuvre. It's no surprise then that publishers often contemplate having another writer extend a particularly successful fictional franchise. Also unsurprising is the tendency of such efforts to fall flat. Alexandra Ripley was no Margaret Mitchell, and even if she was licensed by Mitchell's estate to continue the story of "Gone With the Wind," the original novel's fans (they call themselves Windies), were unenthused by the results.

Lately, though, publishers have been pulling out some mighty big guns in the series revival game. This fall, two celebrated British novelists, Sebastian Faulks ("Birdsong") and William Boyd ("Any Human Heart") have published a new Jeeves and Wooster and a new James Bond novel, respectively. Come spring, the Booker Prize-winning novelist John Banville will publish a new Philip Marlowe novel under the pseudonym he uses for his own detective fiction, Benjamin Black. All three of these authors can be counted among the most esteemed British and Irish literary novelists alive today -- which is a far cry from pen-for-hire jobbers like Ripley.

Now, this is not exactly unprecedented. Both Michael Chabon and Mitch Cullin wrote lovely, soulful literary novels about the retirement of Sherlock Holmes ("The Final Solution" and "A Slight Trick of the Light") but neither of those books is really a Sherlock Holmes story -- that is, a mystery written in a campy, high-Victorian adventure mode and narrated by Dr. Watson. By contrast, "Jeeves and the Wedding Bells," "Solo" and "The Black-Eyed Blonde" are Wooster, Bond and Marlowe novels proper. They follow the basic formulae of the classic texts (or canon, as fan fiction practitioners would call it).

If I were a stickler -- and what true fan is not? -- I would here remark that these three efforts are all very well, but not quite up to the standard set by the masters. So I guess I'm not a true fan, for I enjoyed all three enormously, far more than I expected to. Each book does depart somewhat from exact replication of all the canon's characteristics, but in many instances these deviations struck me as -- gasp! -- an improvement.

With Ian Fleming's creation, James Bond, the hurdle is rather low. The Bond novels are highly enjoyable pot-boilers, if also quite silly, so when Boyd settled the superspy into the seat of an airplane headed toward a messy African civil war and had him crack open a copy of Graham Greene's "The Heart of the Matter," my first thought was, "Oh, this could actually be good." Instead of battling some ridiculous cartoon villain, Bond must navigate the sort of morally treacherous waters where many a John Le Carré character has been shipwrecked. Boyd leaves open for debate just how legitimate the British government's interest in the conflict (roughly based on the Biafran civil war) might be, so when Bond refrains from contemplating this question, you do notice the omission.

That's always been my problem with Bond: a sneaking suspicion that he's just a sociopath. Look at the evidence. He's entirely preoccupied with the purchasable outward trappings of "the good life": high-end automobiles, fine wines, fancy guns, sexual conquests and other paraphernalia. Most telling of all, he apparently has no friends. Boyd opens "Solo" with the spy celebrating his 45th birthday alone in a hotel restaurant with some hoity-toity bottle of champagne, apparently quite content with this expensive but rather forlorn festivity. A hot actress immediately begins to hit on him, but not before a seed of doubt has been planted in the reader's mind; is this guy actually kind of a loser? I've never been much charmed by the purported glamour of Bond's life, so Boyd's efforts to dig beneath its shiny surface (his Bond also suffers from intermittent flashback dreams about his World War II experiences) registered as a welcome deepening, rather than a diminution of the hero's wish-fulfillment studliness.

Philip Marlowe, on the other hand, has a pretty good idea of just how messed up he is. He, too, may subscribe to the romantic notion of a hero whose efforts to defend the Good conveniently exempt him from the emotional demands that can be made on lesser men, but at least he has the sense to recognize that this stance has stunted him. Banville's Marlowe, after inevitably falling into bed with the classy dame who shows up at his office in the first scene, lies around afterward thinking, "Clare Cavendish was out of my league, and I knew it." Having treated her brusquely, he muses, "That's Marlowe for you, the Indian who throws away a pearl richer than all his tribe."

Like poor Clare, we want to like Marlowe more than he'll ever let us, but the fault is only partly his. There's a decided twist or kink of nastiness in everything Chandler ever wrote, a Campari-like bitterness that gives his fiction its piquancy but can at times induce nausea. His generalized contempt for much of humanity is not above using race, sex or sexual orientation as a justification and this makes him and his hero a bit of a bully. When you get Chandler's hard-boiled Los Angeles filtered through Banville's more equanimous sensibility, there's also a lot less about "wetbacks" or "shines," and fewer patronizing remarks about women who are neither as smart nor as alluring as they think.

On the downside, Banville -- whose own ornate prose style has often been likened to that of Joyce -- lacks the vulgarity to achieve Chandler's signature toughness. You're not going to find a line like "The girl gave him a look which ought to have stuck at least four inches out of his back" in "The Black-Eyed Blonde." Banville does, however, have Chandler's ironic understatement down cold: "They came through the door in a hurry. They were impatient fellows in general, as I was to find out."

As someone who could never summon the interest to finish one of Banville's Dublin-set detective novels (also written under the name Benjamin Black), I was impressed by the plotting of "The Black-Eye Blonde," its perfect pacing and use of misdirection, exactly the sort of skills you'd expect to find lacking in a literary novelist. Finally, and for me most importantly, Banville nails the spoiled L.A. atmosphere that is Chandler's forte: the vast, gluey hours spent in the car; the dusty, narcotized bungalows with dwarf palms out front and mementos of the residents' Midwestern past inside; the dark, shabby, yeasty-smelling bars huddled back from the relentless sunshine.

Last but not least there is Faulks' Bertie Wooster, probably the tallest order of all. As an author, Wodehouse adheres as strictly to his frivolity as a Trappist monk does to his vow of silence. Part of the delight of his novels is the knowledge going in that you know almost exactly what you're going to get. Faulks gives it to you, too: The oddly named friend whose engagement must be salvaged via some ludicrous stunt, the daunting older authority figures who must be dodged at any cost, the object that must be stolen from a country house by climbing trees or scaling walls, the ill-fated Bertie scheme and the miraculously corrective Jeeves one, and finally the irksome sartorial innovation that Bertie willingly abandons to reward his genius of a valet at the story's end.

The essence of Wodehouse's appeal lies in the effervescence of his comic prose combined with the clockwork operation of his farce. His style is not actually that hard to mimic, and Faulks -- who did his own James Bond book and has made something of a professional hobby out of writing pastiches -- acquits himself very well. The primary comic device in "Jeeves and the Wedding Bells" is a role switch: Jeeves must pose as a lord and Bertie as his manservant. Of course there are complications, and after one of them, Bertie remarks, "The Bertram who slunk back up the servants' staircase to his quarters, there to bury his head beneath his pillow, was far from the gay boulevardier of song and story. ... Where was the pep-filled fear-nothing who laughed at tyrants and cocked a snook at fate?"

Call it blasphemy, but I think Faulks executes this sort of stuff splendidly. If "Jeeves and the Wedding Bells" has a flaw it's that it's a bit too long, with a bit too much about cricket and the mechanics of horse-race gambling, but that may be a matter of taste. What Wodehousians will notice most are the occasional interjections of sober thoughts about World War I and the general strike of 1926, included as what I suspect to be a joke about the utter lack of historical references in the canon. (Does anyone really complain about such omissions in Wodehouse's stories? I can't imagine so, yet get the impression that Faulks is tweaking someone who does.)

And then there is the most radical departure offered by "Jeeves and the Wedding Bells": the prospect of a permanent change in the domestic relations of these two confirmed bachelors. For anyone who demands that Bertie's scrapes and Jeeves' composed resourcefulness must remain forever suspended as if in amber, changeless and eternal, I will concede that Faulks has broken faith. But personally, I've always speculated wistfully on Bertie's long-term destiny. He is idiotically contented, it's true, but I can't help thinking that he could be downright blissful. Also, Jeeves: Should such a paragon of manhood go even partially to waste? I think not! Faulks gives these characters -- surely two of the most beloved in the history of fiction -- an extra quantum of happiness that, I confess, brought mist to the old peepers. I like to think the master himself would be gratified.