Sex workers say the trade is safer than ever, but opponents claim liberalization has caused human rights abuses 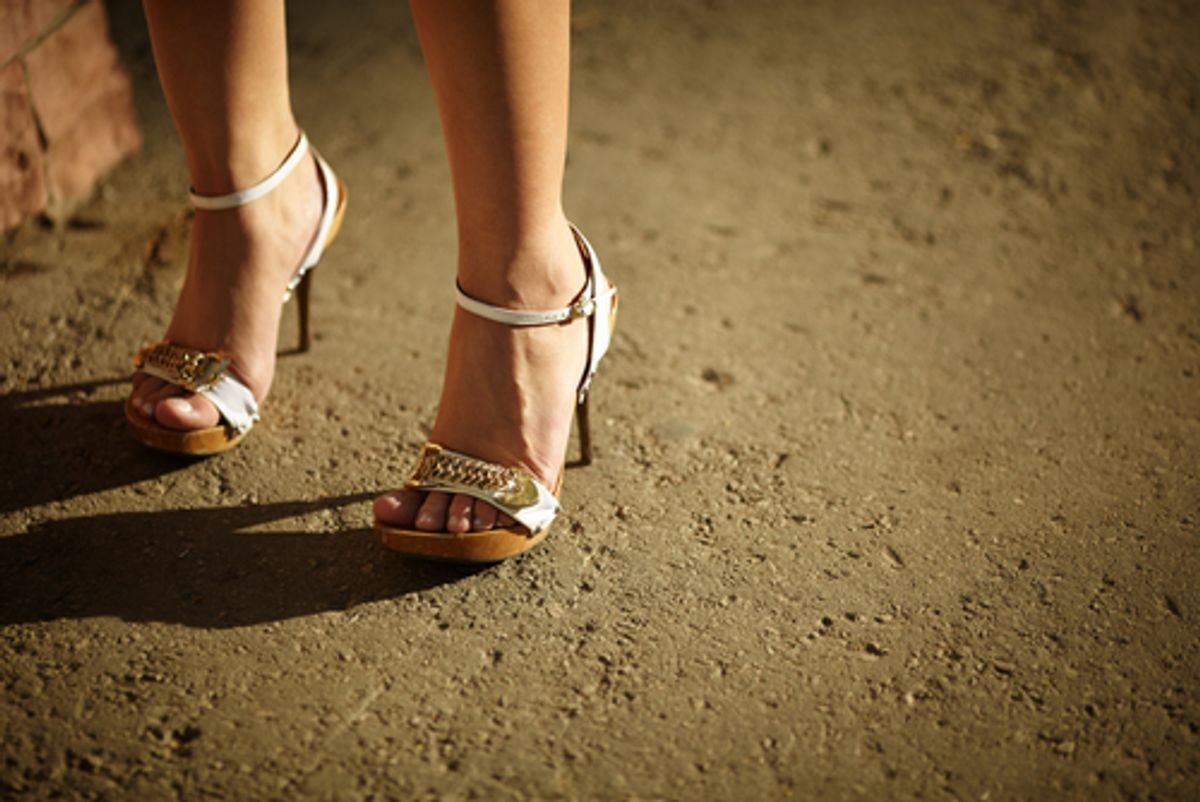 BERLIN, Germany — Streams of cars flash through the busy Nollendorf intersection as young prostitutes dressed in skin-tight hotpants and stilettos flag down drivers, dragging deeply on cigarettes or chatting on mobile phones.

Hailing from Romania, Hungary and Bulgaria, few speak English. But they know why they're in Germany.

“Street prostitution is legal here,” says a tall, spindly woman from Hungary. “I'm doing this because I have to send money home to my family.”

A decade after Germany legalized big-money brothels and recognized prostitutes' rights as workers in some of the world's most liberal prostitution laws, business is booming. Organized sex workers say the trade is safer and healthier than ever.

But now a surprise campaign by the country's most prominent feminist is invigorating longtime enemies of the oldest profession who argue that the changes have turned Berlin and other towns into city-sized discount stores for sex.

“Prostitution isn’t limited to the evening anymore, it's an around-the-clock service,” says Monika Thamm, a member of the city legislature from the Tempelhof-Schöneberg district, where Nollendorfplatz is located.

“There are playgrounds and kindergartens in the area, and in the summer, the prostitutes will take their customers to the playgrounds to, well… fulfill their contracts,” the legislator, from Chancellor Angela Merkel's center-right Christian Democratic Union (CDU), said in an interview.

A longtime anti-prostitution crusader whose fight against Schoneberg's streetwalkers had recently all but dropped off the radar, Thamm says she's now receiving interview requests from Berlin newspapers on a daily basis.

That’s thanks to a new media campaign by Alice Schwarzer, founder-editor of the women's magazine Emma and arguably the country's most prominent feminist.

“Twenty years ago, German men had to go abroad to indulge their secret fantasies,” a Schwarzer campaign letter reads. “Today, Germany is a sex paradise for foreigners thanks to the 2002 reform.”

The number of prostitutes working in Germany is estimated to have more than doubled to some 400,000 since then, which Schwarzer says has contributed to a massive increase in human trafficking and exploitation.

She argues that Germany should roll back its liberal policy in favor of a model used in Scandinavia, where selling sex is legal but police are free to nab, fine and embarrass anyone seeking to buy it.

Others say the impact of the 2002 reform isn’t as clear as she suggests.

Although surveys and anecdotal evidence show that two-thirds or more of Germany's prostitutes are foreigners — mostly from Eastern Europe — cases of human trafficking for sexual exploitation are believed to have dropped by a third between 2001 and 2011, according to police statistics.

Representatives of Germany's legal, organized sex workers say they have nothing to do with unlicensed and forced prostitution or human trafficking. They say that repealing the Prostitution Act would punish the innocent and rob thousands of women of access to healthcare benefits and other basic rights.

“[Our] biggest legal problem right now is the threat of harsher legislation and more control,” says Alexa Müller, a Berlin prostitute and member of a 30-year-old support group for sex workers called Hydra.

“All that does is force more workers and places underground, which means less safety for everyone involved.”

Although freelance prostitution has been legal in Germany for more than a century, the “promotion of prostitution” was a criminal offense prior to 2002 and exchanging sex for money seen as immoral under the law.

That meant prostitutes couldn’t expect help from the police when clients refused to pay or restitution from the courts when landlords evicted them. Bars and hotels could also lose their licenses if sex workers were found operating on their premises.

Passed by a coalition of Green Party members and Social Democrats, the reform was meant to protect prostitutes from exploitation — along with getting them to pay taxes.

Politically aware sex workers insist the law has succeeded in both, and that any remaining problems with organized crime and human trafficking should be tackled by further normalizing the trade rather than adopting the Scandinavian model.

However, police say the prostitution law relies too heavily on rights granted to sex workers.

A recommended licensing regime for brothels, for example, which might have given the authorities more power to prevent exploitation, was never put in place, they say. Legalization also prompted many federal states to revoke police rights to enter and search brothels without warrants.

“I can’t say whether the law might have scared off human traffickers if it had been fully implemented,” says policeman Heike Rudat, a veteran of Berlin's vice squad. “The only thing we can say is that from the perspective of the police, the way things are going right now, this law hasn't succeeded.”

Among them, a 40-year-old, college-educated, Hamburg-based prostitute Undine de Riviere has worked in the industry for 20 years and now has a house and family, not to mention a pension plan.

“The oldest active colleague I know is in her mid-seventies,” she says.

“We age with our clients,” she adds. “Not every older gentleman wants a girl in his bed who could be his granddaughter.”

On trendy Oranienburgerstrasse, prostitutes in expensive-looking leather bustiers and thigh-high boots appear healthier and wealthier than the new migrants in Nollendorfplatz.

One young woman, fluent in English as well as German, says they're on the streets by choice.

“We’re working without pimps, so we only have three or four customers per night,” she says in support of the sex-worker laws. “We’re all German girls here. That’s why we’re high-class prostitutes.”