50 nice gifts for those who've been naughty

Maybe they've run afoul of the law, maybe they're just a bit scattered. They still deserve something comfy or shiny 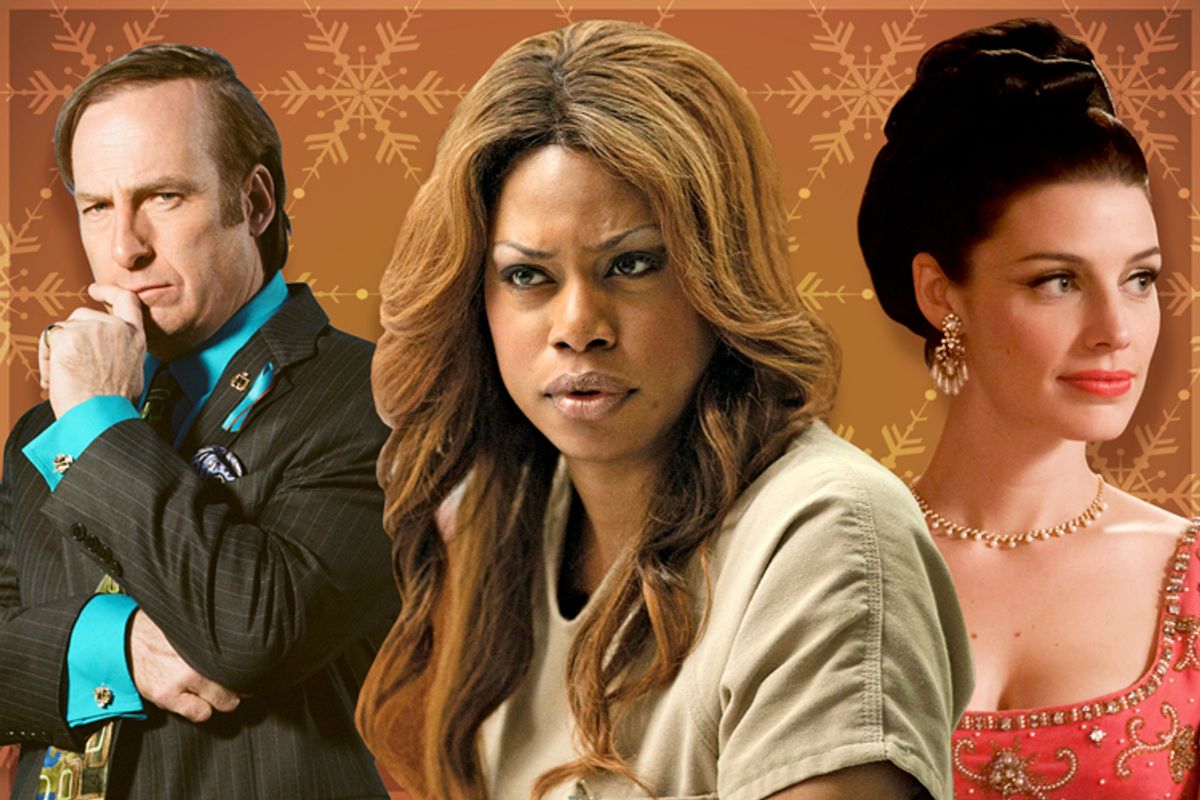 Every holiday season we thumb through the gift guides with the best intentions — then we put off our shopping because we're marathoning "Breaking Bad" and updating the What Mindy Wore wiki. Call it research. Everyone knows and loves a hustler like Tom Haverford or a jock as bro-tastic as Kenny Powers. We've gone shopping for them — plus felon Sophia Burset, workaholic Mae Holland and even incorrigible attention-whore James Franco — and found gifts for all of the naughty characters on your list. So she doesn't cook. It doesn't matter. Maybe she wants to feel like the kind of person who could cook, if she had a personal chef on staff and also Mario Batali's cell number. Gwyneth Paltrow's "It's All Good: Delicious, Easy Recipes That Will Make You Look Good and Feel Great" ($23) might be full of lies, but they're such pretty lies.

Best friend isn't a person, it's a tier. Let her know you'll always have her back with the Kate Spade New York "An Ace Up Your Sleeve" black and gold bangle ($48).

She's not the only one who hasn't figured it all out yet. Cartoon blogger Allie Brosh's graphic memoir "Hyperbole and a Half: Unfortunate Situations, Flawed Coping Mechanisms, Mayhem and Other Things that Happened" ($20) is hilarious and relatable.

She has a hard time committing even to a gel manicure, but with Deborah Lippmann's Starlight nail set ($49) she can change the color as often as she changes her mind. Six sparkly shades, literally at her fingertips.

If she's going to be a mess, she might as well be a hot mess. The Deena and Ozzy Hammered Crossbody Bag ($42) holds a wallet, phone and emergency take-out menu. It's vegan leather, basically for moral reasons. She'll dance across city streets and fall on her face with irrepressible humor in the lightweight Acorn Via Wrap Flat ($55), which takes the classic ballet flat design to new heights.

When you move as much as she does, traveling light is the only option. The Alexander McQueen leather pouch ($270) keeps her essentials — if nothing else — tidy and contained.

She's so embarassed that she's not a real person yet. Kelly Williams Brown's indispensable manual "Adulting: How to Become a Grown-Up in 468 Easy(ish) Steps" ($12) can help.

And the next time she runs off to Paris for a weekend, she can sleep on the plane. The Sofia cashmere cable knit travel blanket and sleep mask ($273) weigh next to nothing and folds up small for traveling light.

These gold peacock hoops with blue agate insets ($148) symbolize both beauty (she has it) and good fortune (working on it). She's your wisest confidante and a true-blue friend. She's also doing serious time for credit card fraud. She might not have a chance to visit for another eight to ten, so let the new documentary "Scatter My Ashes at Bergdorf's" take her behind the scenes at one of the world's most iconic fashion spots. ($18)

"Change is the healthiest way to survive." She has a lot in common with Karl Lagerfeld. Here's all of the collected wisdom of the Chanel and Fendi legend in his own words. Hardcover. ($21)

A girl's skin is her best friend. She can look after hers with the Clarisonic Mia 2 ($150). The micromassage gently removes environmental impurities and residue more efficiently than traditional facial cleansers.

Don't get between a woman and her tools. The Bobbi Brown Basic Brush Collection ($185) will make her fully equipped to work her magic, even though she's anything but basic.

When in doubt, improvise. Using a handful of natural ingredients and maybe a few smuggled from the kitchen, she can experiment with making her own custom blends with the Creative Cosmetics Kit ($40). Only the very best … with just the right amount of dirty. Thank him for his service with a bottle of the award-winning small-batch Professor Cornelius Ampleforth Bathtub Gin ($52) and a pair of beautiful handmade black walnut martini glasses ($100).

The day you slipped a dollar in his pocket you knew you'd get into some great trouble together. The Kennedy Leather Money Clip Wallet by WANT Les Essentials de la Vie ($135) in Baltic Grey is made of calfskin and coated canvas, with a sturdy metal clip made for those single-bill retainers.

He's the Hagen to your Corleone, the paddle for your creek. He's your first call from jail. Make sure he takes it with the Jawbone ERA Bluetooth headset ($102) with built-in motion sensor, noise and wind-canceling technology, and it runs apps.

You love him because he knows how to fight dirty. He'll love reading the history of the dissolution of the once-strong friendship between presidential candidates and the role of the muckraking press that changed the face of American politics. Doris Kearns Goodwin's "Bully Pulpit: Theodore Roosevelt, William Howard Taft, and the Golden Age of Journalism" is rigorous yet accessible. ($24)

There's going to come a time when he's going to need to split town. Hideo Wakamatsu's Muscular Carry-On ($219) is made from ultra-light polycarbonate and rolls smoothly on 360-degree swivel wheels. Fits international and domestic carry-on dimensions, slips across state lines like a dream. Imagine the brilliant footage he'll shoot from his jet-ski with the Pivothead HD Video Recording Camera Hands-Free Sunglasses ($299). Try not to imagine anything else he'll do with it.

He's a dad now, but he can still out-party and out-drink each of you. Drop the stainless steel Chillsner ($29.95) into a warm High Life and enjoy.

He's a bulletproof tiger, man. His comeback is almost complete. He's off the team, but he can still dominate The Show with the new Playstation 4 ($399).

He's played for half of these teams, traded by all. These bottle openers are made from upcycled game-day bats used in Major League games. ($85-125)

Okay, so he's not much of a reader. But seeing as how he's already recorded his own memoir, he might be interested in Ben Bradlee, Jr.'s hefty new biography of another gifted young athlete. "The Kid: The Immortal Life of Ted Williams" is no "You're Fuckin' Out, I'm Fuckin' In," but what is? Skip the scarf, go for the tasteful (yet naughty) Hermes leather bracelet instead. The Hapi 3 MM in black chamonix calfskin with gold-plated hardware is the perfect combination of soft and hard. ($320)

She doesn't need a tutorial, but she'll still devour this collection of photos, sketches and commentary on "Paris Street Style: A Guide to Effortless Chic" by fashion writers Isabelle Thomas and Frédérique Veyset. ($17)

You'll never get over the sight of her in the California sun. Update those retro lenses with Tom Ford's Carrie frames in Havana tortoiseshell. ($246)

It's 1967 somewhere, right? Cover up that space-age iPad with an Emilio Pucci print patent leather case ($220). She's done with that clunky old laptop. The new 16 GB iPad Air weighs one pound and will keep her connected (so very connected!) day and night. ($499)

But some analog pleasures should remain. "My Real Blog" is a gorgeous pale blue saddlestitched notebook, with real pages for writing with a real pen. Unhackable, unshareable, completely non-transparent. Permanent until you throw it in the fire. ($14)

You're not saying her new job is creepy, but her team member just invited you to a Portugese tile-painting craft night and you don't even work there. The sheer peacock-print All Eyes On Me scarf ($16.99) and the Deco Splashed Beret ($48) for when she needs to slip away unnoticed.

Help her document what she wants to share with the Muvi Atom Super Micro Camcorder ($55). At a mere 1.75 inches tall, it's tiny but mighty, recording at a web-friendly resolution. Even comes with a sports mounting kit for instant helmet-cam action.

But she's so happy when she's not in the office. Or answering emails. Or liking/tweeting/zinging/sharing/upworthy-ing everything under the sun. She can keep this inflatable Sevylor Fiji Travel Pack Kayak ($88) in her car for emergencies, when she just has to go looking for harbor seals. Work hard, train hard. The Fitbit Flex Wireless Activity and Sleep Wristband ($98) is a sleek little piece of technology that will remind her of how little sleep she actually gets. Syncs directly to iOS and Android devices, along with whatever new toy Fitz/Simmons have cooked up.

You've had more long days at the office than you'd care to admit. The "Whiskies of Scotland" book opens to reveal eight small bottles, one for every reason you've given her to drink — today. ($50.59)

This job is frustrating and sometimes the reason is you. Help her blow off steam by donning Everlast's EverGEL Mantis Mitts ($38) and let her pound away. Make sure she suits up first with breathable machine-washable fist wraps. ($8)

She drives the bus. Sun's Tea double-wall tea tumbler with spill-proof lid ($13) has a built-in stainless steel strainer so her tea can brew while she's picking you up.

Darts are for housewives and little girls. Slip the United Cutlery Tomahawk Throwing Knife Set ($8) into the Secret Santa exchange and see her blood pressure level off in front of your eyes. Some people think the devil's in the deets, but he says "the 'tails." That's innovation. Hook + Albert's lapel flower in snapdragon is another reinvention of a classic crowning touch. Hand-cut and -starched, mounted on a shell button. ($30)

Everywhere he goes, he's walking on red carpet. But he probably doesn't have one of these. The sleek and beautiful Haerfest AE17 shoe horn — this indispensable tool is made with a brass core and finished in matte gold or antique nickel (nick-nick). ($32)

You can't rent this swag. Joe and David Henry's new biography, "Furious Cool: Richard Pryor and the World That Made Him" ($18) is the definitive manual on comic genius.

It's no DJ Roomba, but the wireless and cordless Beats by Dr. Dre Pill Speaker ($199) is small but mighty. Cue Ginuwine or take a call from across the room using any bluetooth-enabled device.

He can get ready to charm the ladies, then open their drinks with this Old-Fashioned Comb Bottle Opener ($22). He's an overachiever. For the novella he's writing on his iPad to the sonnet cycle he's scribbled out on cocktail napkins, the Dokumentmappe cotton canvas envelope sleeve can keep all of his brilliant ideas organized. ($69)

A typewriter has style, but his assistant is too busy to scan the 400 pages he wrote last night. With the USB Typewriter, he can plug in any compatible device and clack away. ($799)

He's only applying for professorships that will allow him sabbatical leave to film his new "Catcher in the Rye" adaptation (admit: you googled it). Hook + Albert's corduroy elbow patches in jaunty multi-color stripe will add a little professorial style to his favorite jacket. ($25)

First he played Allen Ginsberg. Now he's playing C.K. Williams. But can he play ball like Walt Whitman? This Brooklyn Poets baseball team shirt ($34) celebrates the American bard's 1855 classic "Leaves of Grass" and the idea that a team of poets could win anything more strenuous than a fellowship.

Because it's only a matter of time before he starts a band, too. With the DIY Guitar Pick Punch, he can turn almost anything into a guitar pick. ($25)