Fist-bumping while Rome burns: The seduction of Silicon Valley disruption

San Francisco is filled with pink moustaches and it is pissing people off. But it's also kind of cool 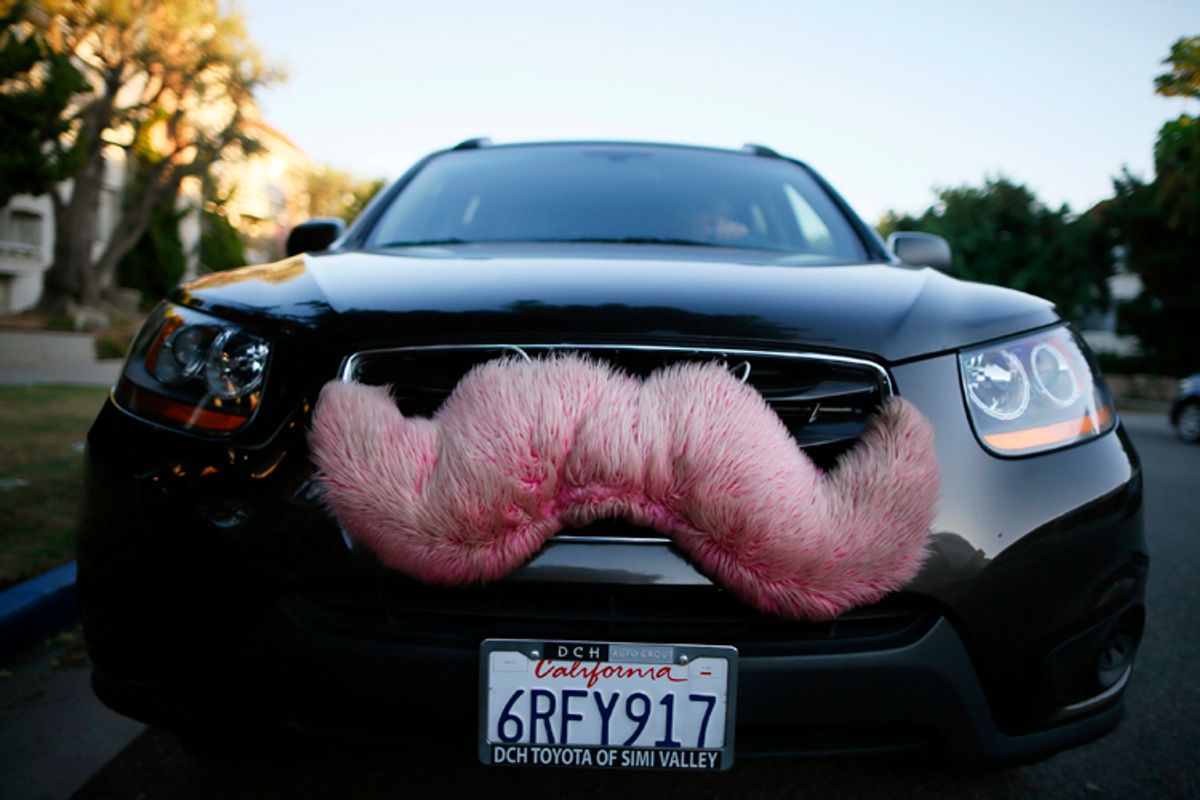 A driver with the ride-sharing service Lyft waits for a customer on a street in Santa Monica, Calif., Oct. 17, 2013. (Reuters/Lucy Nicholson)
--

I fist-bumped my first Lyft driver last Thursday night, on my way to a foodie networking party in San Francisco' SoMa district at which you could make your own bitters and every other guest seemed to have a part-time hobby brewing artisanal small-batch whiskey. And I wondered: Am I a character in my own parody? Did Dave Eggers write my evening? Or was it Gary Shteyngart? This is perhaps the one thing that I didn't expect from the future: my inability to distinguish it from satire.

For the vast swathes of the world that have yet to be invaded by pink-moustachioed automobiles, Lyft is a car-sharing service that encourages (requires?) a culture of conviviality between driver and rider. You summon your Lyft vehicle -- adorned with its distinctively colorful facial hair -- via your smartphone app, fist-bump your driver as you settle in to the front passenger seat, and then merrily engage in a conversation about the millennial San Francisco zeitgeist as you zip your way to the next craft-cocktail experience.

Seriously. That is what happened last Thursday night. Twice. And I have to say, I enjoyed myself. Convenient, cheap and entertaining. I'll do it again.

In the week that followed, the tech-dominated NASDAQ index broke through 4,000 for the first time since the peak of the dot-com boom; the New York Times discovered that some people don't like how Lyft and its brethren are transforming San Francisco; the FDA sent a cease-and-desist letter to Mountain View, Calif.'s home-DNA-testing startup 23andme; and a girls' toy company in Oakland launched a frontal assault on the Beastie Boys.

These events are connected by more than geography. They are all reflections of how the particular culture of technology and wealth in and around Silicon Valley is changing society. And while there is much to dislike about how Silicon Valley is rewriting the rules based on little more than the authority of its own arrogance, there's also plenty of seduction happening. My first Lyft fist-bump felt absurd. My second felt like the new normal. Go with the flow, man.

Let's start with girl power. The GoldieBlox versus Beastie Boys drama kicked off a fascinating debate about fair use and copyright. GoldieBlox rewrote a sexist song and used it to advertise a toy that (supposedly) will encourage girls to become engineers. But the Beastie Boys have long refused to allow any of their music to be used in advertisements. The Beasties complained, and GoldieBlox sued them!

The legal status of a parody that is itself an advertisement for a commercial product is ambiguous. But Felix Salmon pointed out an aspect of the drama that is clear as daylight. When GoldieBlox -- founded by a Stanford graduate with a career in marketing, Kickstarter funded, represented by a huge and powerful law firm -- appropriated the Beastie Boys song "Girls" without contacting the band first, and then followed up by initiating legal action, the company was playing by Silicon Valley rules: Don't ask permission, move fast, break things. Seek forgiveness later. (Indeed, GoldieBlox swiftly pulled the video from YouTube after it became clear that the social media reaction was less than entirely supportive.)

GoldieBlox did exactly what you’d expect an entitled and well-lawyered Silicon Valley startup to do, which is pick a fight. It’s the way of the Valley -- you can’t be winning unless some household-name dinosaur is losing... The real target of the GoldieBlox lawsuit, I’m quite sure, is not the Beastie Boys. Instead, it’s the set of investors who are currently being pitched to put money into a fast-growing, Stanford-incubated, web-native, viral, aggressive, disruptive company with massive room for future growth — a company which isn’t afraid to pick fights with any big name you care to mention.

The Way of the Valley. You could think of this "way" as an atmospheric condition that currently cloaks the greater Bay Area more thoroughly than the infamous marine layer that turns San Francisco summers into Arctic survival endurance-fests. This is our emergent culture: an onslaught of newness, disrespectful of status quo, law and propriety. But stimulating and energizing all the same, even as it destabilizes. And the more you look, the more you see it.

For example: It might be hard to imagine two things more different than a construction set targeted at girls and a do-it-yourself genetic testing kit for analyzing potential flaws in your own genome. But the news that the FDA had sent a cease-and-desist letter to 23andme on Tuesday plugged into exactly the same cult-of-disruption paradigm as GoldieBlox's "Girls" video.

How to regulate genetic testing is a hugely complicated issue (you can read a fascinating discussion of the relevant issues and technologies here). But it's hard to dismiss the FDA's concerns about 23andme. People are likely to make life-changing decisions according to the answers they get from self-administered genetic tests. So it's important that we know for sure that the available data proves that 23andme's technology works. A close reading of the FDA's letter, however, indicates that 23andme had simply stopped answering questions from its own regulator, and was going ahead with a massive new marketing campaign without having resolved the FDA's primary concerns. I don't care how you feel about overbearing Big Government -- the potential problems associated with false positives or negatives from DIY genetic testing are serious. Are we really supposed to trust safety assurances from profit-maximizing private entities when it comes to life-or-death health issues?

23andme was co-founded by Google CEO Sergey Brin's former girlfriend Anne Wojcicki. It would be hard to get more Silicon Valley than that. 23andme picked a fight with the FDA. It broke things: the FDA approval process. It most certainly didn't ask permission for its new marketing campaign. So far, 23andme hasn't actually filed suit against the FDA, but hey, there's still time.

I wish I could have discussed 23andme and GoldieBlox with my Lyft drivers a week ago. Because Lyft and all its venture-capital-backed "sharing economy" brethren -- Uber, AirBnB, etc. -- are the avant-garde of the Silicon Valley forces currently transforming San Francisco. No one asks permission for anything. Apps are available for download on your phone long before regulators have a clue as to how to handle the relevant public safety issues -- or even what those issues are. Existing players -- taxi companies, hotels, regulators -- are immediately dismissed as hopelessly behind the times.

And to a certain extent, resistance is futile. Urban populations accustomed to operating their lives through their smartphones will inexorably gravitate to new, more efficient -- more fun -- ways of doing things. Mock the millennial fist-bumps at your peril! My first ride through Lyft reminded me of the first time I shopped online or booked a plane ticket through my computer. Damn, that was easy. So convenient! I'm going to do that again.

The rise of the sharing economy and the brazen pugnacity of Silicon Valley explain both NASDAQ's current frothiness and the class anxieties the New York Times has finally caught up to. This is a different kind of bubble. There is real money to be made in applying the new technological innovations that have been pouring out of the Valley for lo these many decades. But change -- relentless creative destruction -- freaks people out.

What makes the current boom different from the last one is that the last time around, the froth was mostly tied to the potential of new technology. This time around, it is a reflection of the reality of new technology. This explains both the wealth being created and the arrogance of those who are deploying new tech. They think they know better because: have you looked at a smartphone lately? It also explains both the sense of loss felt by so many as the old San Francisco melts away like a sand castle before the incoming tide, and the excitement experienced by those who -- as San Franciscans have always been wont to do -- thrill to embrace the new.

It is entirely possible that 10 or 20 years hence we may look back at the era when pink-moustachioed cars teemed on the streets of San Francisco as the last absurd, ridiculous gasp of the second great tech bubble before it popped. Maybe we'll even recall this moment as the tipping point before Silicon Valley arrogance and accelerating class stratification precipitated a political reaction. We'll understand how those convivial fist bumps masked the relentless emasculation of labor, the division of society into freelancers subletting their cars and couches and physical labor for the benefit of a smaller and smaller group of people at the top of the techno-food chain.

I don't know. There are definitely times when I witness the baroque excesses of the Bay Area in 2013 -- the artisanal rye whiskeys, the pork-belly-and-rabbit beer garden sausages, the every-day-a-new-revolutionary-app -- and it all feels like the blind, unconscious decadence of a great empire just before its final descent into madness and irrevocable decline.

And then I take a breath and wonder if it is still all just getting started. And I summon my Lyft driver. And what the hell? Let's fist-bump while Rome burns.