From songs to T-shirts, artists are embracing menstruation in all its bloody glory 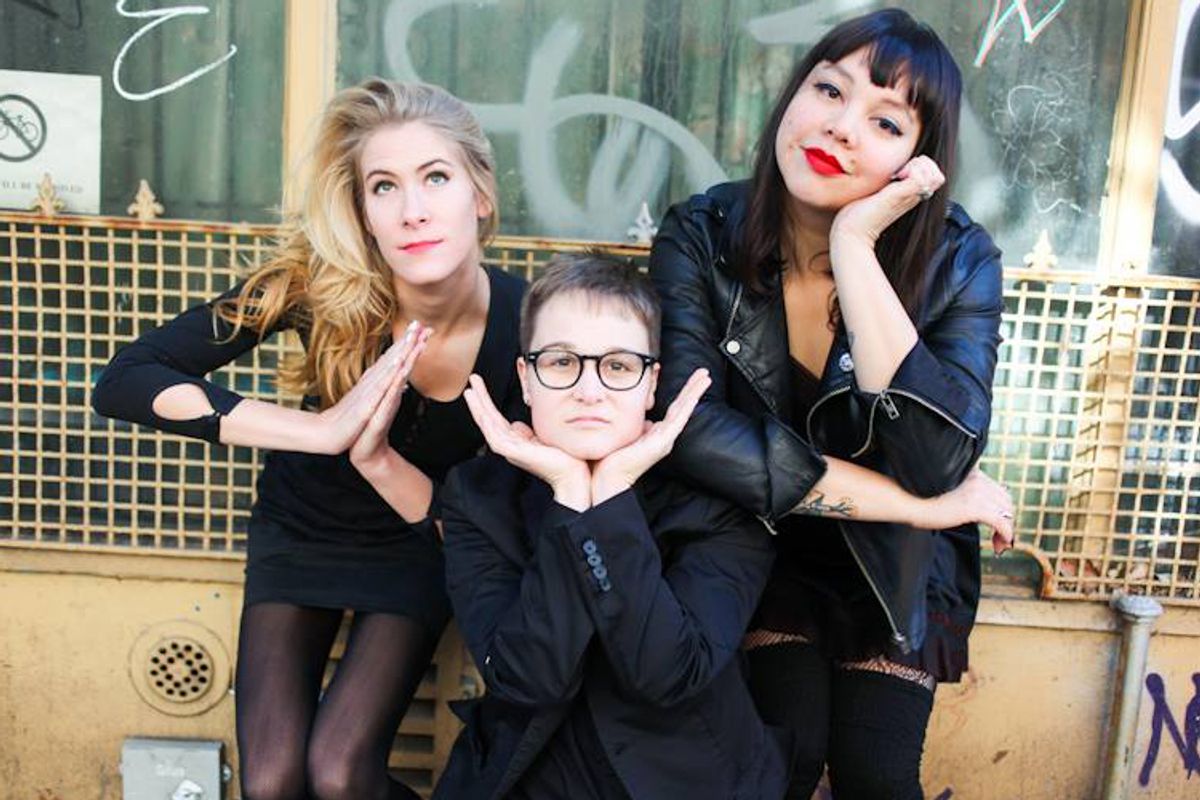 Forgot about “your time of the month,” “the Curse,” and all the delicate and discreet euphemisms for menstruation. Recently, there has been a spate of viral music videos and art from a rising group of female artists who are determined to sing, rap and depict menstruation with (graphic) candor.

Case in point, these lyrics from the opening verse of Hand Job Academy's rap about periods,“Shark Week":

Strap on your redwings it's time to make this bird sing, my bed looks like the elevator from "The Shining" [...]

Bleedin' since 11, bitch I ain't new to this feels like a werewolf is living in my uterus

The trio of Brooklyn feminist rappers -- Lil T. aka Meg Skaff, Clara Bizna$$ aka Claire Beaudreault, and Ash Wednesday aka Ashley (a teacher by day who doesn't reveal her real name) -- jam-packed their rap, working toxic shock syndrome, Laura Palmer and Carrie into a single song. After an October piece on New York's The Cut brought attention to “Shark Week,”Jezebel, The Frisky, and a boatload of other sites jumped on the track.

And with good reason. Hand Job Academy shattered every taboo about menstruation in under four minutes, describing in vivid detail every thing you’re not supposed to talk about: the bloodiness, self-pleasure on your period and oral sex on the rag. “I slurp her like spaghetti/got marinara on my lips,” raps Skaff in the final verse.

“Every time we play, the beat drops out around that line,” she says. “You can legit hear people say 'Wow, eww.'” But that doesn’t offend Hand Job Academy. Pushing the envelope is exactly what they intended. Skaff says she wants their work to have a “shock factor” that makes “people say 'it's blowing my mind how ridiculous it is.'”

But “Shark Week” is shock with a purpose. The song is meant to clash with the artificial, sanitized glitz of what Beaudreault calls the “Breast Cancer-pinkazation of culture.” To her, “Everything is kind of Pinteresty. You can't say ‘vagina.’ You say [higher voice] 'vijayjay' or 'vijazzle.'”

Indeed, part of the reason “Shark Week” describes menstruation so graphically is because all of that sugar-coated and precious lingo for menstruation or genitals “infantilizes it,” says Beaudreault and thus demeans women’s intelligence. “You don't have to dumb it down for us,” says Ashley. “Sometimes, it's not cute; it's not pretty.”

And because menstruation is one of those things that is not “pretty,” women have been taught not to share or reveal that aspect of their lives. It’s why so many period product commercials are about girls subtly running to the bathroom without anyone realizing they’re carrying a tampon or wearing a tight white dress without any stain to reveal it’s their time of the month.

“My goal was to take this thing that’s very hidden and seen as disgusting and bring it to the public eye because menstruation is a shameful, disgusting thing we have to hide,” she said. “We go through it every month, but we never talk about it.”

The comments to a Time article about “Period Power” included “That tee shirt is disgusting! All that pubic hair!” and “IF they want to print fine art and nudism, then for kryst [sic] sake, do it Roman or Greek style classic, not this tawdry crap that a 15 yo [sic]  boy would dream up.”

And, actually, those reactions are not really surprising. Even some feminists shied away from this abrasive, in-your-face approach to menstruation. When Amelia McDonnel-Parry at The Frisky posted about “Period Power,” she gave “ample warning that it is very NSFW. And bloody” before ultimately concluding that “I'm all for embracing the awesome power of one's moon cycle, but I still think I'm gonna pass.”

There is something uncomfortably unrelenting about how works like “Shark Week” and “Period Power” force the audience to confront the stripped-down, non-packaged, real-life version of menstruation. And that can be discomforting, not because you're chauvinistic or old-fashioned, but because you're squeamish.

But hypocrisy aside, caving to our anxiety regarding menstruation and other bodily functions rather than confronting them can have detrimental effects. Our bodies do “gross” and odd things. And not talking about them doesn't make them go away; it just builds shame and thus stigmatizes not only the various female processes and functions, but women overall.

For many second-wave feminists, feeling empowered was deeply connected with exploring and becoming comfortable with every facet of one's bodily functions. In her 1970 "The Female Eunuch," Australian feminist Germaine Greer suggested that women consider tasting their own menstrual blood. “If it [the idea] makes you sick,” she wrote, “you've got a long way to go, baby.”

More broadly, the now-classic 1971 text "Our Bodies, Ourselves" encouraged women to discuss their bodies with each other to build knowledge and, in turn, gain control and power. As the preface states, “Ignorance, uncertainty -- even, at worst, shame -- about our physical selves create in us an alienation from ourselves that keeps us from being the whole people we could be.”

Petra Collins similarly argues that bodily constraints on women keep them from maturing into their complete adult selves. “As soon as you grow [pubic] hair or get your period, you’re told to shave it and hide it,” she said. “We’re put back to girls. It’s taking away our power by not letting us fully evolve into being women.”

The millennial artists fighting menstruation shame may face an even greater pressure to fit their bodies to a specific form and hide their “unfeminine” or “irregular” aspects than 1970s feminists did, thanks to the bombardment of photos from Instagram, Pinterest and Twitter. “With social media and all the new technology, there's just more interfaces around and reminders to constantly be working on our body,” said Collins.

In fact, Collins was recently kicked off of Instagram for sharing a photo of herself from the waist down in normal bikini bottoms. Since pubic hair could be seen around the edges of the bottoms, the photo was deemed to violate Instagram’s terms of agreement, even though it was relatively tame and far less revealing than, say, anything Kim Kardashian posts.

It’s incidents like that which remind us how the waxed, cleaned and sanitized version of the female body has become the only acceptable mainstream standard. Extreme pieces like “Shark Week” and “Period Power” may never be the norm, but they help us recognize how much change is needed. As Ashley of Hand Job Academy said, “There’s a lot of work to be done if pubes are being censored. How far have we really come?”