Heterosexual marriage is "hard-wired" into the faith, but there are signs that it is evolving 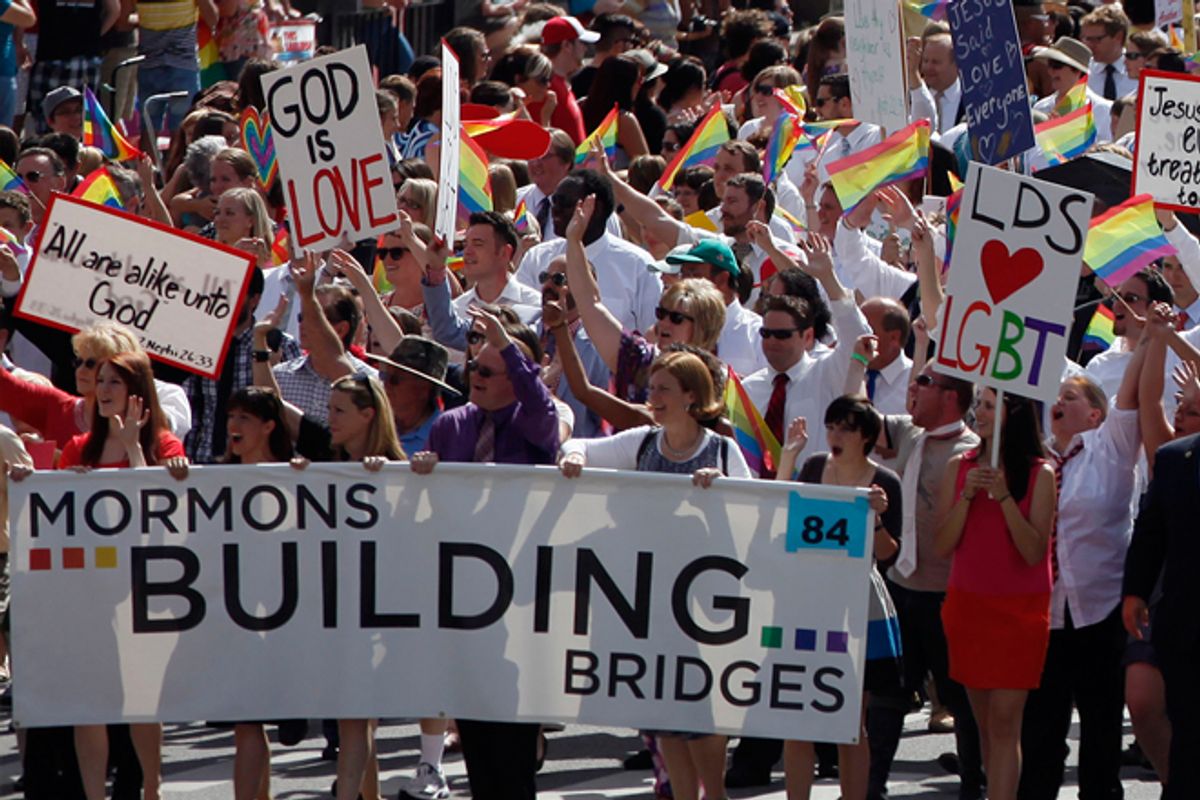 On November 4, a critical mass of Mormons in the United States Senate—including Republicans Orrin Hatch of Utah and Dean Heller of Nevada (whose vote broke a filibuster by his own party)—played a critical role in passing the historic Employment Non-Discrimination Act (ENDA) protecting gay and lesbian Americans in the workplace.

The contrast has commentators from the New York Times to Mother Jones writing about what appear to be divergent impulses on LGBT issues in a faith that built its twentieth-century branding on tight bureaucratic management of theology and public image.

So what do Mormons really believe about homosexuality? Make no mistake about it: more than any other branch of organized Christianity, Mormonism is theologically hardwired around the sanctity of heterosexual marriage. The Mormon concept of God is that of a married heterosexual couple: a Heavenly Mother and a Heavenly Father. Heterosexual marriage solemnized in LDS temples is viewed as a religious rite necessary to full salvation, and the heterosexual family is understood as a reflection of the essential nature of godliness and God’s creation and an eternal unit.

Where LDS people have mobilized against LGBT civil marriage rights, it’s often because they have been taught that their own religious freedom, theology and marriage practices will come under threat—a threat that while disclaimed by most legal experts can feel especially real given LDS historical memory of popular and US governmental anti-polygamy crusades in the late nineteenth century.

But if Mormonism’s unique sacralization of the family presents a theological limit to full participation by LGBT people, it also pushes many Mormons into a position of profound searching and reflection when a member of the family comes out of the closet. How exactly does one understand the obligations and eternal prospects of a son or daughter, brother or sister, who does not fit within what Mormons understand as God’s plan?

Speaking to the Times, Senator Reid related that a “lesbian niece” helped him “work [his] way through the issues”—and to a place where conscience compelled him to ensure that most American workplaces had protections for LGBT workers his own Church did not offer its employees.

The complexity of Senator Reid’s own position suggests that as it turns out—twentieth-century LDS bureaucratic branding efforts notwithstanding—Mormons are actually subject to the same kinds of growth and conflict as every other people of faith, even if they tend to manage those conflicts in culturally-specific ways.

Tracking shifting dynamics within Mormonism around LGBT issues, it’s helpful to understand some of the key tensions that shape what appear to be divergences within the faith. Here are a few to watch:

Theology vs public affairs: Because there are no theological synods in Mormonism, no formally trained official theologian corps, Mormon theology evolves in mysterious ways. But evolve it does, in tandem with shifting personnel in the Church’s upper leadership echelons and local and global power dynamics, and awkward moments in that evolution are left to LDS Church Public Affairs to manage.

Case in point: in 1969, LDS Church Apostle Spencer W. Kimball—who later became the Mormon prophet who received and implemented the revelation to welcome men of African descent into the lay priesthood—wrote in his book The Miracle of Forgiveness that homosexuality was one in a series of “ever deepening degeneracies” pursued by the sexually depraved. Although Kimball died in 1985, the view he articulated remained virtually uncontested until the early 1990s, when small, nuanced changes in speeches by high-ranking LDS Church leaders suggested an emerging minority view of homosexuality as a trait of biological origin.

When LDS Church Apostle Boyd K. Packer flatly rejected the idea that a child of God could be born gay in a controversial October 2010 address to the worldwide church, LDS Church Public Affairs officials were tasked with receiving and responding to protest petitions from the Human Rights Campaign, and Elder Packer’s denial of possible biological origins for homosexuality was later edited out in published versions of the talk.

LDS Church Public Affairs has also been credited with the development of new web materials that present homosexuality as a “complex issue” deserving “care and sensitivity.” Public Affairs seems to be positioned to respond to delicate and quickly evolving issues in a ways that the Church’s ecclesiastical chain of command is not.

Insulation vs assimilation: Mormons are more likely to mobilize against LGBT civil equality in places where they are numerous enough to be able to leverage their numbers effectively and to experience themselves as total social community. Where they are so few as to make political mobilization ineffective or even costly to their relationship with their host community, they have not.

Mother Jones’s Stephanie Mencimer suggested that fear of harming Mitt Romney’s run for the presidency kept the Church on the sidelines in 2012 marriage equality contests in Maryland, Maine, and Minnesota. But it’s likely that a pragmatic regard for the numbers also had something to do with it. Mormons make up less than 1% of the population of the states of Maryland, Maine, and Minnesota. In California, home to Proposition 8, LDS people constitute 2 – 3% of the state’s population.

In Hawaii, 70,000 Mormons comprise 5% of the state’s population. Mormon-majority communities have been in existence on Oahu’s North Shore since the late nineteenth century, and the North Shore community of Laie is home to a Brigham Young University campus and the LDS Church-owned Polynesian Cultural Center tourist site. Bus caravans have been organized from LDS North Shore congregations to demonstrations in Honolulu, congregational contact lists have been used for email and text blasts, and forums designed to mobilize campaign participation have been convened at BYU-Hawaii.

These dynamics reflect centuries-old realities of Mormon insularity and assimilation in the United States, but the global growth of the Church will bring new developments and dynamics as LDS people in widely divergent national political contexts respond to global movements for LGBT equality.

It's important to understand that there is a lot of autonomy given to local Mormon leaders to engage their congregations in the way that they think best. True, sometimes that means that we're going to get it wrong, as we did in Hawaii, but it also means that we have the opportunity to get it right, and local leaders can create welcoming congregations where everyone—gay, straight, or anywhere in between—has a place in the ward family, and where even openly gay individuals like me can be called to serve in local leadership positions.

“Priesthood leader roulette” is what it’s called sometimes at the grassroots; differences in temperament and inclination among Mormonism’s all-volunteer, modestly-trained lay clergy. Mayne attends a progressive Mormon congregation in the San Francisco Bay area. He remembers that during the Proposition 8 campaign, even as leaders at the LDS Church’s headquarters issued a letter urging Mormons to join the Yes on 8 campaign, there were divergences—sometimes significant—in the level of involvement directed or supported by local leaders

Local leaders and even paid LDS strategists, lobbyists, lawyers, and political operatives who stage the intersection of faith and politics can exert a profound influence on how local Mormons implement doctrine handed down from Church headquarters.

In California in 2008, that meant a campaign that encouraged LDS people to view gays as the “them” in a historic “us vs. them” struggle between God’s plan for the family and the ways of a degraded world.

An old Proposition 8-style view of gays as “them” seems to be prevailing this month in Mormon Hawaii, even as Mormon Senators in D.C., both Democrats and Republicans, have acted on the understanding that gays are also “us”: fellow Mormons and fellow citizens deserving of equal protection under the law.