GOP's massive 2013 mistake: How the party ignored its terminal illness

Celebrating Obamacare's troubles, Republicans finish the year ignoring lessons it was supposed to learn from 2012 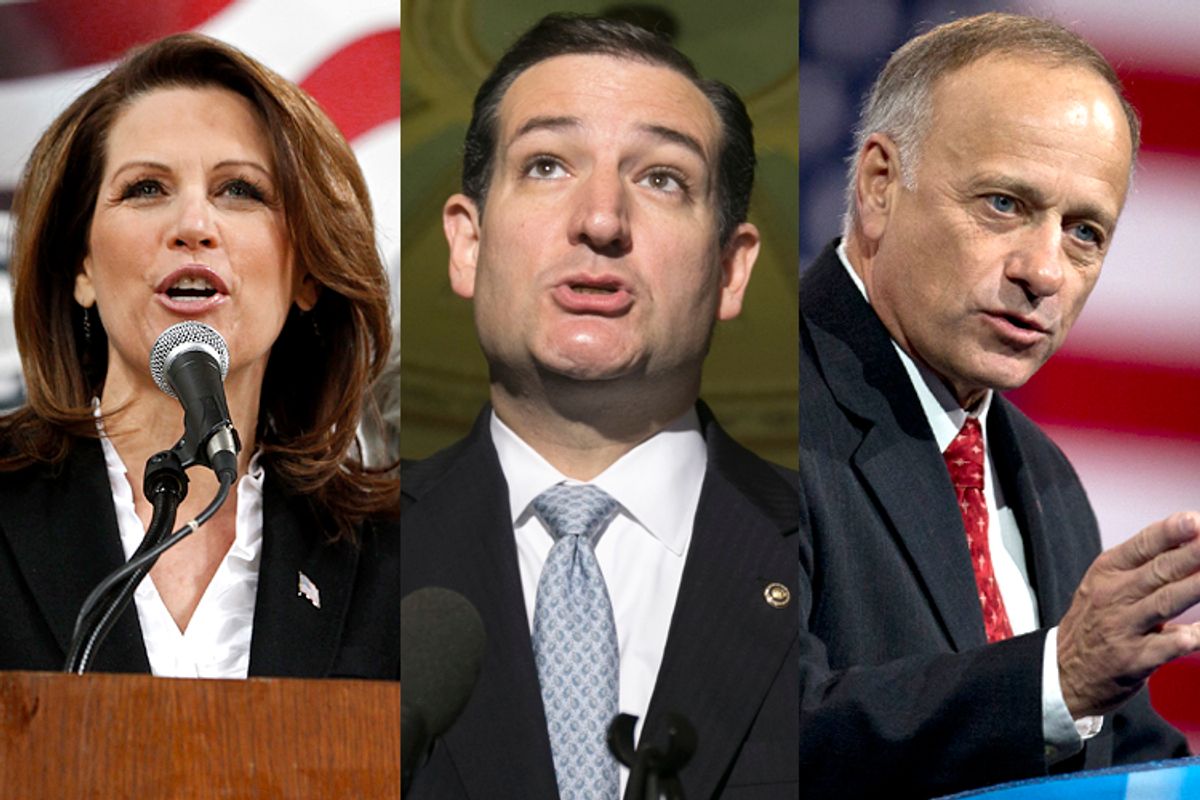 We did a whole “Hardball” hour Friday on how the GOP ratcheted up the crazy this year. Chris Matthews made me break down Rep. Steve King’s crazy anti-Mexican “calves the size of cantaloupes” slur, and I was forced to wonder why he’s thinking with such a sculpter’s eye for detail about another man’s calves, while otherizing him into a beast of burden, not quite human. Way to go for that Latino vote in 2014, GOP.

But the long list of crazy made me realize that despite the RNC autopsy that kicked off 2013, looking at ways to make sure it wasn’t merely the party of “stuffy old men,” the GOP apparently learned nothing from its 2012 drubbing. With the stumbles of the Affordable Care Act, that might seem OK, and there will be no penalty for their year of dithering and race-baiting. Rep. Michele Bachmann says the ACA’s problems make Republicans “look like geniuses,” and while it’s easy to mock her non-genius, her party looks better politically than it did a month ago. Polls show a dizzying swing from October, when the GOP’s not-genius government shutdown put Democrats ahead in generic 2014 balloting. Now some polls have Republicans in the lead.

Still, it may turn out that the ACA troubles were a brilliant Democratic plot to distract Republicans from their demographic terminal illness, and convince them that the Kill Obamacare playbook is all they need for 2014.  Republicans have made absolutely zero progress in reaching out to any of the demographic groups – women, young people or Latinos – that the RNC’s autopsy agreed they had to, in order to stay alive as their older white base ages into that great Tea Party rally in the sky.

I know, Oprah got in trouble for suggesting that racism will ease when this generation of racists, well, dies. I wrote in my book that it makes me uncomfortable to hear allies suggest we just need to wait for old white Republicans to die off – they’re talking about a lot of people in my family. Yet it’s striking to me how comfortable Republicans seem relying on their ancient race-baiting playbook, and ignoring the country we’re becoming.

It’s easy to mock Steve “calves the size of cantaloupes” King. He’s a doofus. But Sen. Ted “I won’t study with people from the minor Ivies” Cruz is just as bad, and arguably worse.

National reporters and pundits collude in the GOP’s denialism. The National Journal’s Alex Seitz-Wald, a Salon alum, wrote a piece I wish I had, showing how many times Republicans and their media enablers have asked “can Obama recover” from this or that real or imagined catastrophe. From the BP oil spill to this seeming “dithering” over Syria, Obama’s presidency has been written off as terminally ill before, only to recover, again and again. (Actually, the first use of “Can Obama recover?” Seitz-Wald finds was on CNN’s Larry King after the Jeremiah Wright mess blew up in May 2008. Needless to say, he recovered that time too.)

Now if only his colleagues Josh Kraushaar and Ron Fournier would read Seitz-Wald, because they are making the National Journal the hub of breathless  “Can Obama recover?” reporting.

Certainly Obamacare seems to be recovering, albeit slowly. Ezra Klein, who kicked off liberal wonk panic about the ACA in October, thinks Obamacare is “turning the corner,” and will gradually ramp up, perhaps a month behind schedule but not too late for a successful Jan. 1 rollout of new insurance plans. And this amazing Washington Post story, about Kentuckians, many of them presumably Republicans, lining up for ACA coverage shows that when a state wants the program to work, it can work. A 35-year-old father of five with diabetes, who’d never had health insurance and had racked up $23,000 in hospital bills, rejoiced when he got enrolled.  “Well, thank God,” he said, laughing. “I believe I’m going to be a Democrat.”

I don’t think Democrats should be celebrating just yet. A lot can still go wrong, and there’s an industry devoted to finding and surfacing (or exaggerating or even concocting) scary Obamacare stories. Still, listening once again to Sen. Ted Cruz (on "Hardball") warning that people will become “addicted to the sugar” of ACA subsidies is a reminder of how the Tea Party leaders actually hate the Tea Party base. They’d privatize Medicare and Social Security and deny Mitch McConnell’s constituents health insurance. It’s amazing that Oprah gets grief for talking about when the Tea Party’s racist base will die, when leaders like Cruz are the ones who would literally hasten that day.