Joan Rivers' troubling pattern of lashing out at other women 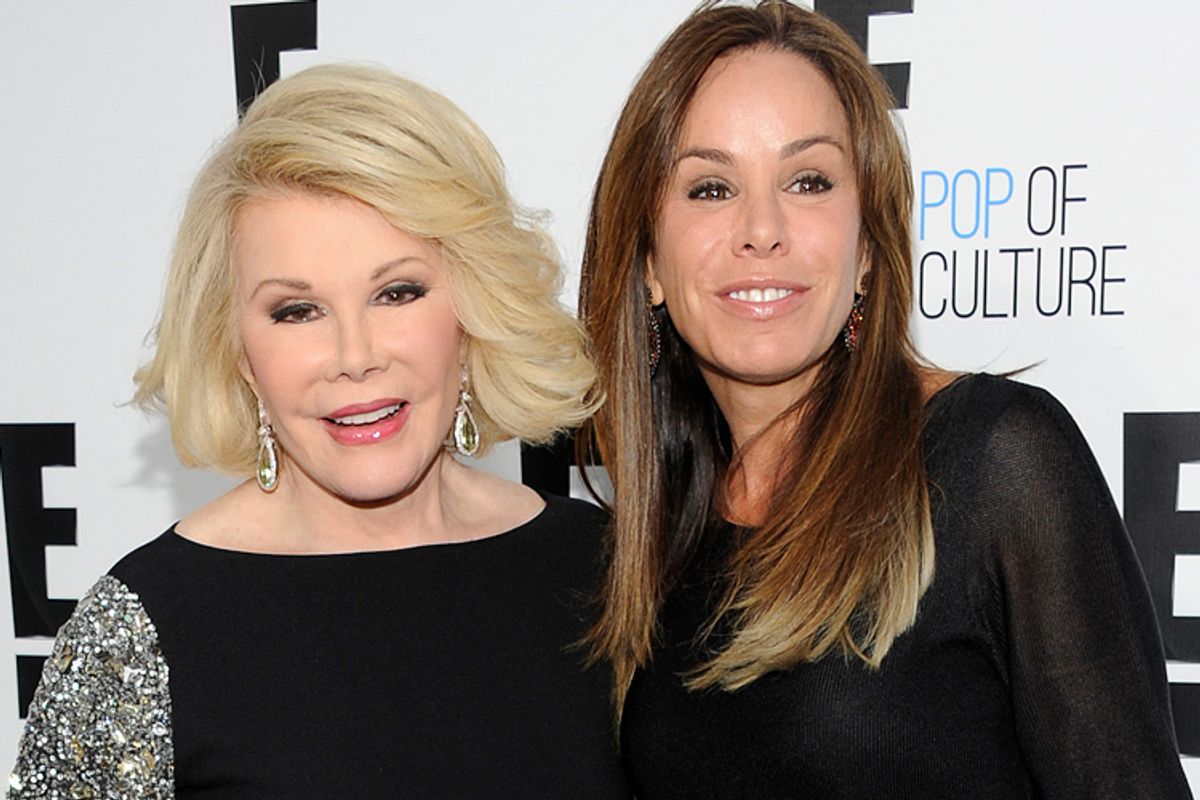 If anyone could decisively turn public opinion against Joan Rivers, it'd be Jennifer Lawrence, the starlet who can do no wrong in the eyes of her fans. Lawrence, who's become perhaps the most in-demand actress on earth in the past 18 months and who's won fans over with frank talk about the oddness of modern celebrity, directed her sharp critique of Hollywood at Rivers, saying that the shows like Rivers's "Fashion Police" "are just showing these generations of young people to judge people based on all the wrong values and that it's OK to point at people and call them ugly or fat." Rivers responded by calling Lawrence arrogant and hypocritical.

This is classic Rivers, a comedian who's long been able to dish it out but not to take it. Rivers' reinvention from comedian to red-carpet reporter and, now, fashion critic has seen her abandon jokes in favor of just flatly stating a negative opinion of a star. On Twitter, for instance, Rivers tells sort of half-jokes about celebrities, statements that aren't, strictly speaking, funny, just vitriolic enough to make an impression. There's none of the sort of sophisticated structure that earns tearing someone down; she's just biting at the ankles of Hollywood, being loud and appealing to the reader or viewer's vitriol. Watching her shrieking racial slurs at a paparazzi recently as she defended Alec Baldwin's use of homophobic language gave the strong impression of a comedian no longer, if ever she was, in control of her comedy.

And "Fashion Police" is little different from these flat statements of utter disdain, with its panel composed of publicity-hungry E! personalities and Rivers herself. The show probably made its greatest impact when panelist Kelly Osbourne called Christina Aguilera fat. What a legacy. It's not that this show is having a deleterious impact on culture -- it's likely more symptom of tabloid culture than cause -- but does Rivers really think that her show is above reproach, that anyone who critiques it is arrogant?

Rivers consistently portrays herself as a show-business survivor, and it's an accurate enough picture; things like the documentary "A Piece of Work" or a New York magazine profile of the comic paint her as a pioneering female comic (definitely true) and someone who works constantly, never saying no to a gig (ditto). But Rivers is strenuously working to burnish her reputation as someone who says clothes are ugly or that women celebrities are stupid. It's classic ladder-pulling behavior: Joan Rivers has worked her entire life so that she might shame younger performers for their appearance or demeanor, making life tougher for them. She is willing to call her writers "schmuck writers" and "idiots" when they go on strike, pulling the ladder up behind her once again when those who worked for her sought back wages.

The irony is that Jennifer Lawrence's acknowledging "Fashion Police" by name is the biggest press the show's had in years. Rivers ought to be thanking Lawrence for calling attention to the program, though maybe putting the actress at the center of one of her barbs, saying she "tripped over her own arrogance," is her way of doing that. Rivers exists to bedevil celebrities -- to her dubious credit, she more or less invented modern, fashion-obsessed red carpet coverage at awards shows. Her shtick is praising the stars on occasion for good red-carpet ensembles but tearing them down when they set a foot wrong, a critique that has nothing to do with anything but Rivers' aesthetic judgment. Hey, sometimes stars really do look silly in their frocks. But they're also people promoting their work. Rivers' critique is perpetually skin-deep.

Rivers' endurance speaks to the excesses of modern celebrity culture -- ideally, there wouldn't be room for a court jester whose whole job is mocking stars. But given that she does exist as a critic of celebrities, should the stars be thanking her for her insults? She seems to think so. The world would be a better place without "Fashion Police" -- or rather, without the sort of flaw-obsessed celebrity-watching that "Fashion Police" simply capitalizes off of. But if we're stuck with it, maybe Rivers can move on from shaming anyone who takes exception to celebrity culture. Rivers has had to fight, hard, to make it in an industry that's not particularly genial to women. Maybe she could stop fighting to make life harder for other women.