Republicans' self-hatred swells: The GOP vs. its own base

Rick Santorum is unhappy that older people, who tend to vote Republican, are getting insurance via the ACA 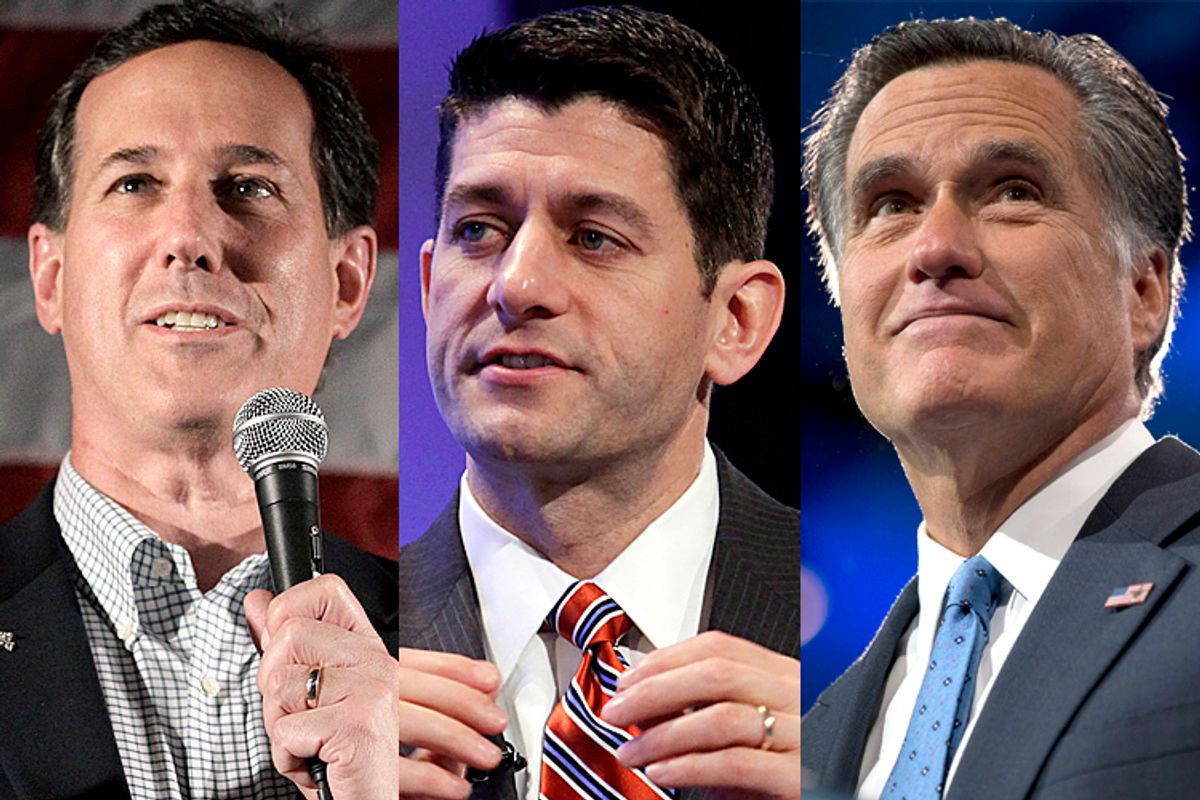 Does any modern political party besides the GOP hold a huge segment of its base in contempt? I’ve written a lot about how Republicans have failed to make inroads with Latinos, young voters or women since their 2012 defeat, but what’s really interesting is the way they continue to deride many of their older, white, working-class voters, too.

When Mitt Romney insulted “the 47 percent” of Americans who pay no federal income taxes, he failed to notice that the vast majority of them are white, most of them white seniors, the most reliably Republican voters in the country. A large portion of the people Paul Ryan describes as “takers” – vs. productive “makers” – are likewise older whites. And although Ryan and his party want to turn Medicare into a voucher program – run by exchanges, much like the Affordable Care Act – they tried to hide that fact during the 2012 race because it was hugely unpopular with their base.

Well, let me just add that one of the solutions that President Obama tried to accomplish was to let people keep their own insurance. It turns out that a lot of insurance companies are actually allowing that to happen, and that could cause even more problems for Obamacare, because that means fewer and fewer people getting into the exchanges. And the ones who, at least to date, it's just facts Gov. Dean, the ones in the system are much older.

I talked to one insurance company today, a third of their enrollees are over sixty years of age. That is not how an insurance system would work, but those are the people signing up and the folks who can keep their plans because they're more customized and lower cost, will now. And the folks who are going to get into these exchanges are going to be probably sicker, older, and as a result, premiums are even going to go higher.

First of all, it’s not clear Santorum is right about this. Some states are seeing unexpectedly high proportions of younger people sign up for coverage. In Kentucky, 41 percent have been under 35; in California, it’s 22 percent, which is proportionate to their share of the population. Still, the enrollment rate in California is highest for people over 55. That’s not surprising, or permanent: Based on the experience of Massachusetts, older people tend to sign up for coverage first; younger enrollees do it closer to the deadline.

But assuming that Santorum isn’t wrong (admittedly a leap), what is he saying? That people over 60 who don’t have coverage shouldn’t be able to get it? We know these people are white, and presumably – since they’re not eligible for Medicaid, which covers many of the poor and unemployed -- they’re working people. But Santorum says “that’s not how an insurance system should work.”

Luckily Howard Dean was there to disagree. “I think it's great that we're insuring people who can't get insurance that are over 55 and 60,” he told Santorum and Crowley. “That's what this is supposed to do.”

Of course, if insurers are unhappy with their older customers, Rep. Alan Grayson has an answer: his “Medicare for All” bill, which would allow anyone who wanted to to sign up for Medicare instead of a private insurance plan. Back during the ACA debate many liberals wanted to see that option, but it was vetoed by insurance interests. Opening up Medicare to people 55 and older would help stabilize the program – although they’re the older edge of the ACA pool, they’d be younger and healthier subscribers in the Medicare pool – and provide an alternative for those priced out of or underserved by the private market.

Still, the big news this weekend was that the federal website that lets most people access insurance exchanges, Healthcare.gov, is mostly fixed. That’s why Santorum was reduced to railing against those takers in the GOP base. On Fox News Sunday, Chris Wallace attacked the ACA as “income redistribution.”

And, of course, Santorum insisted that the ACA’s troubles raised questions about “the president’s competence.” Dean wasn’t having that either.