The actress talks about working with Meryl Streep, her role on "The Americans," and her past life as a P.I. 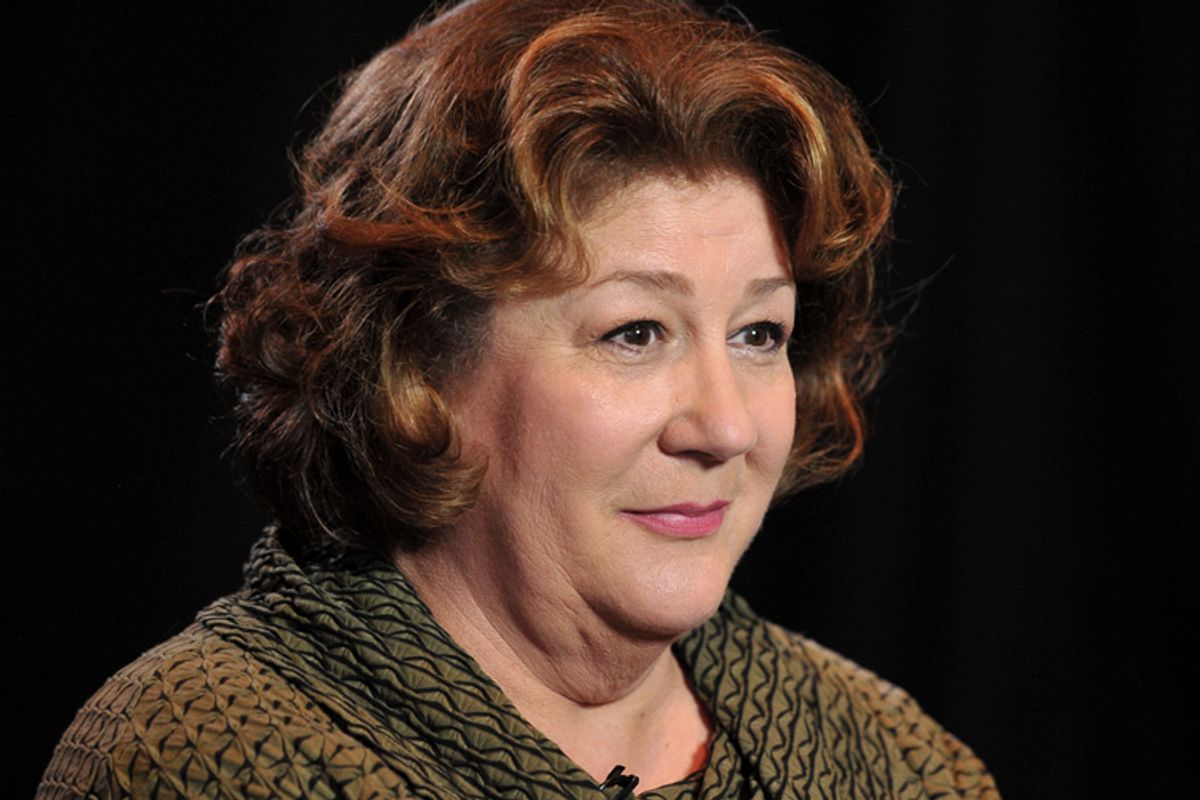 Margo Martindale is enjoying the highest-profile period in her career thus far. But she's always had fun.

The co-star of "August: Osage County," out Dec. 25, has had a lengthy career both in Off-Broadway and regional theater and as a character actress on film. (You may remember her as Hilary Swank's uncaring mother in "Million Dollar Baby.") But everything changed when Martindale won an Emmy, in 2011, for her role as criminal matriarch Mags Bennett on FX's "Justified." All of a sudden, she was cropping up everywhere; Martindale plays the most magnetic character on the spy drama "The Americans," returning next year, as well as the center of the fractured family on the CBS sitcom "The Millers," two shows she described as among the greatest challenges of her career (the former for the accent work, as Martindale's never quite shed her East Texas drawl; the latter for the pace of network production).

But "August: Osage County" seemed to come to Martindale easily. As Mattie Faye, the sister of a mourning pill addict (played by Meryl Streep), Martindale is at the center of all of her family's simmering resentments and roiling dramas. It's she, not Streep, who has the film's toughest scene, parsing out long-kept secrets to her niece (played by Julia Roberts). And it could well be she whose career is most fundamentally changed, yet again, by "August"; of the three most prominent women in the cast, she's the one who's not yet an A-lister -- and the one who does the most heavy lifting.

Not that Martindale seems to mind the spot she's at right now. She told Salon about her past life as a P.I. by day, actress by night; why she has such trouble with the English language; and her philosophy on taking the role that's right in front of her.

You've spoken out in the past about the gender imbalance in Hollywood. Does "August: Osage County," with roles for you, Meryl Streep and the actresses playing Streep's daughters redress that imbalance at all?

I've seen, No. 1, there's a lot more lately. Maybe started with "Justified," for me. It seems to be they're giving women -- certainly in this movie, which is incredible writing for women -- but I see it more in television. Women of age, in power. Then again, how many women are in this movie?

Seven or so, depending on how you count Abigail Breslin.

I don't necessarily think it is. I just happened to get a great role on television. The writing was just poetically beautiful on "Justified," and "The Americans" has been great too.

Is it possible to quantify how much "Justified" changed things in your career?

It's very interesting where I have different things in my life that changed. In my 30s, I did the original company of "Steel Magnolias." I created that -- created! -- I originated that part. [Writer] Bobby Harling'd kill me to hear that. I originated that role. And then movie people saw me because everyone in the movies came to buy that play and I started getting parts in movies. That kind of worked through the '90s. The next turn was being in a play and getting nominated for a Tony [for her Broadway debut as Big Mama in "Cat on a Hot Tin Roof," in 2004] at the same time as "Million Dollar Baby" coming out. From there on, it's been this -- and then with "Justified," it went somewhere else.

Have you ever felt, with a limited number of roles available, worried about typecasting?

Originally, I just wanted to work, so somebody had written a play for me, my dear friend Jim McLure, a play called "Laundry and Bourbon," and I originated that at Princeton. I called every theater in the country that was doing that play and said, "I'm the original Hattie, and I'll come to your theater to do it." So what happened is that so many regional theaters invited me to do that -- and then they gave me another play. It was a good strategy! It worked out. That happened around 1979. That was playing a Texas woman. Did I care? No. I didn't care. I've got to do lots of different kinds of people, and I'm really pretty versatile. Now people are allowing me to be.

It sounds as though you had faith you'd be allowed to be.

I presume you'd been familiar with the play "August: Osage County" --

-- and so do you feel as though, getting the play from three and a half to two hours, it kept the fundamental nature of the play alive?

I couldn't tell you what's missing. It is pretty incredible for a screenplay to do that. It is pretty hard to do -- it's been done, but not very often. It feels very much like the play to me.

Do you miss, now that you have the privilege of television and film projects, the opportunity to be onstage?

I do! I really do. There was a play that came along last year that I really wanted to do, but I wouldn't have been doing "August." And they came at the same time exactly. But I was really disappointed -- it wasn't a successful play, but I understood it in a different way that I thought it would be.

I'm working tomorrow! Three o'clock in the morning pickup! A little early! I love doing "The Millers" because it's a challenge. I'm interested in making it good. And making it … I'm interested in that challenge a lot. But is that something I thought I'd be doing? I thought I'd be doing that in the '70s. It hadn't crossed my mind. It was a timing issue -- I took the job in front of me because I didn't know what other job was there. And I'm … embracing it.

How else is it challenging?

It's incredibly fast. That's what's challenging. To make fast look easy is a great challenge. And you have to make it look easy in three days. It's a challenge physically for me, it's a challenge verbally for me, because it goes so quick. My speech isn't as fast as that character's. Or the speed we should go for that particular show. It's fascinating.

Things have to be produced fast.

I guess you've got to make a story in 22 minutes. That's crazy, huh?

The film gets at some tough subjects. Did that bleed through into shooting -- did you feel tension and resentment toward your costars?

We were a great group, an ensemble, a family. We all wanted those parts … But did I feel the resentment of my character when I looked at them off-camera? I didn't turn off the part that thought of Meryl as my sister. I didn't turn off the part of my brain that thought Chris Cooper was my husband. I was alive in that person, when I was there. I felt very close to Chris and Meryl. That's how it bled in.

Tell me about goals. Is there some sort of character you look at and say "I'd really love that kind of part"?

I'd like to play … maybe somebody English. That would be another challenge, and a challenge I actually could do.

Do you have a facility with accents?

It's not easy. But it's something I'd like to give my full attention. Meryl said today, "You sound like you're from East Texas" -- when I was pretending to do an Irish accent! I always sound like I'm from East Texas! I don't on "The Americans." And that has been a challenge for me! I'm trying to speak as though I'm speaking another language. Which I am! I'm speaking another language, a language I've learned!

Going back to your statement that you took "The Millers" because you didn't know what the next offer would be -- would you describe that sort of motivating force as fear or a sort of serenity?

It's living in fun. It's like -- it's very childlike. And, you know, that didn't mean we had the luxury of a lot of money or anything. I, many times, when I was doing a hit play at night -- not a Broadway hit play, but an Off-Broadway hit play, like "The Miss Firecracker Contest" -- I was doing a job during the day. I was a private investigator. The day job wasn't stressful. It was so, so stupid! I did background checks. I did a lot of pretending to be other people.

In this current phase of your career, have things like doing press junkets and going to premieres and awards shows started to feel at all natural?

No. It's all not what I thought it was. Maybe it's because I did that whole thing for "Justified," it felt natural but it felt exhilarating and wildly fun. And I wasn't doing another job at the same time. Then, going to this year's Emmys to promote "The Americans" and presenting, it was an interesting, different thing, doing it again. It was very different than the first time.

It's a gig. I hate that it's not … I like talking to people. That's fun. I guess if I wasn't working, it'd be easier. That's what was so fun about "Justified" -- I was free! I was dead! I wasn't coming back!