"Homeland: "American exceptionalism" at its worst 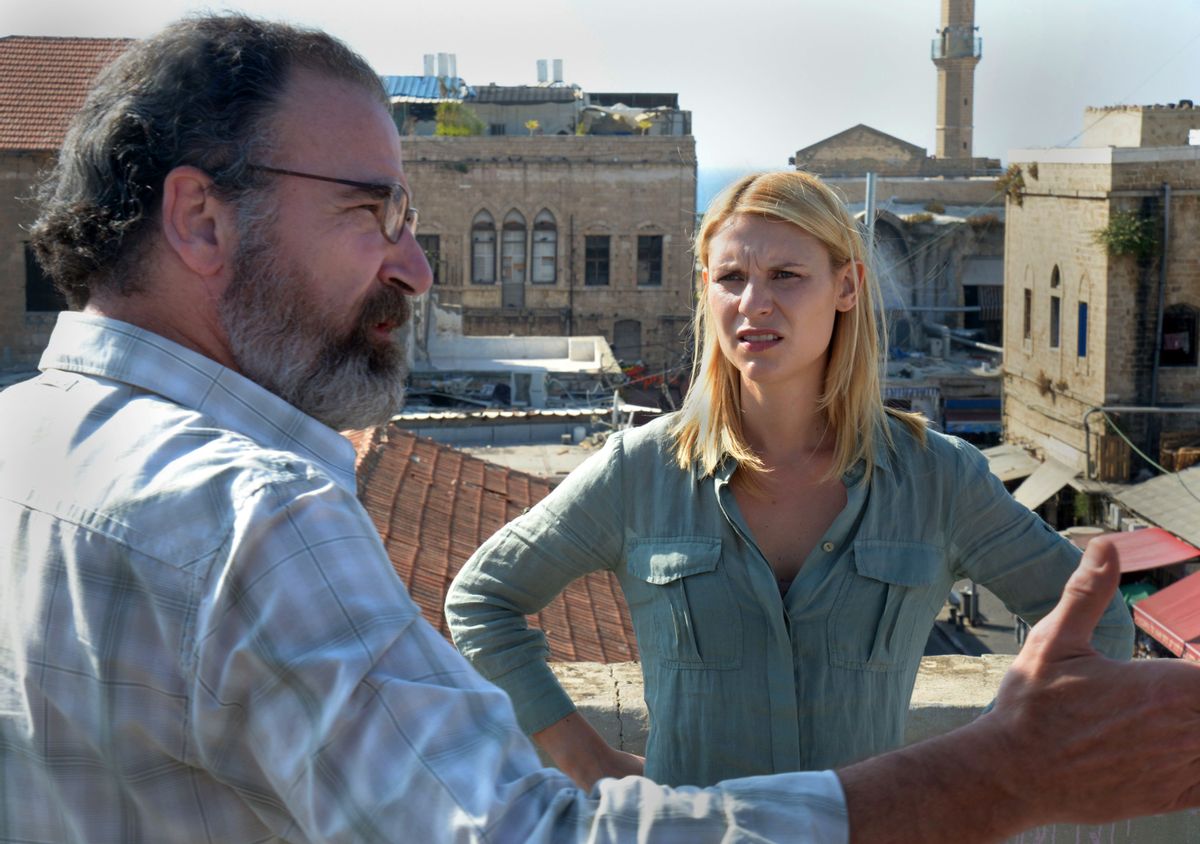 Claire Danes as Carrie Mathison, right, and Mandy Patinkin as Saul Berenson in a scene from the second season of "Homeland." (AP/Showtime/Ronen Akerman)
--

Spoiler alert! This article delves into scenes from the third season of Showtime’s “Homeland” series up to episode 9, which aired Nov. 24.

Historic agreement or historic mistake. Surrender or victory. Disgrace or triumph. Few hyperboles remain to be applied to the recent nuclear deal with Iran by the endless stream of pundits and politicians who have weighed in on the subject.

But for a truly original solution to the Iranian conundrum, just tune in to “Homeland,” the Showtime television series that has intrigued, delighted and occasionally irritated millions. President Barack Obama once cited it as his favorite show, a fact that could prove positively terrifying in light of new plot developments.

Season three of “Homeland” has heroes and villains aplenty; the problem is, it is almost impossible to tell one from the other.

Take Andrew Lockhart (played by Tracy Letts), the gun-toting, slivovitz-slugging senator who wants to destroy the CIA but is then named to head it.

Lockhart insists that the “old games” — clandestine operations, double agents, live sources, and most of what was commonly thought of as espionage — are now dead. The US should go with its strengths.

“Where we’ve been most effective is militarily,” he says, as he points his hunting rifle and takes down a goose.

Now that Saul Berenson (Mandy Patinkin), the acting director of central intelligence, has engineered a maneuver to take out six senior Al Qaeda operatives, there is only one major threat left: Iran.

“The president wants all options on the table,” Lockhart tells Berenson.

“All options,” in the real world, has long been shorthand for bomb-happy congressmen who would like nothing better than to punish Tehran for the 34-year-old sin of storming the US Embassy and holding 52 hostages for 444 days.

One might be inclined to see Lockhart as the bad guy, especially since he threatens the position of the ever-lovable Saul, impassioned defender of all that is good — CIA-style, that is.

Saul has a plan to make things right with Iran, to “break the logjam” so that “two countries who haven’t been able to communicate with each other for 30 years except through terrorist actions and threats can sit down and talk.”

One can only wonder whether Saul was listening in on the Geneva talks that, oh so coincidentally, resulted in the interim nuclear deal that very same weekend.

But Saul’s “plan” has little to do with diplomacy. Instead, he wants to send an ex-Marine who once tried to kill the vice president into Iran to assassinate Gen. Danesh Akbari, head of Iranian intelligence and “the greatest impediment to peace.”

The Marine, Nicholas Brody (Damian Lewis), is hunted as a terrorist suspected of bombing the CIA and killing 219 people. He insists on his innocence, but the fact that Brody secretly converted to Islam during eight years of captivity in Afghanistan appears enough to damn him in the eyes of most. Of course a videoed and televised confession (referring to a planned but not executed assassination of the VP) didn’t help.

Brody will take out the ”impediment,” and Saul will insert his own man in his place — Majid Javadi, the very nasty bit of goods who was actually behind the CIA bombing, who shot his daughter-in-law in the head and stabbed his ex-wife to death with a broken bottle of Iranian plum wine.

He has also embezzled $45 million from his own government, a fact that Saul uncovered and which gave him power over Javadi, who, we are told, worked for the brutal secret police, Savak, before Iran’s Islamic Revolution.

“He was the Shah’s man before he was the Ayatollah’s,” as one character remarks. Now, apparently, he is Saul’s.

Things are sure to improve once Javadi is running things.

This story twist is all too reminiscent of a previous CIA plot to overthrow a problematic Iranian government — although, sadly, that one is not fictional.

Winston Churchill wanted his cheap oil and billions in profits back, and enlisted the help of the ever-obliging Dulles brothers to accomplish his goal. John Foster Dulles ran the State Department, while his younger brother Allen Dulles headed the CIA.

They sent a CIA officer improbably named Kermit Roosevelt (grandson of Teddy) into Tehran to oversee the operation, which was ultimately successful, if by success you mean removing a beloved leader and installing a rogue general who had been detained by the British during World War II as a German agent.

Washington also brought back Shah Mohammad Reza Pahlavi, who had fled the country in fear during the unrest, and who spent the next 25 years on the Peacock Throne wreaking vengeance on those who had questioned his power.

In the long run, the coup engendered the anger and suspicion that resulted in the 1979 revolution, the hostage crisis and the very sour relations with much of the rest of the world that persist to this day.

“Homeland” is proving as unpredictable as its ostensible heroine, the brilliant and bipolar Carrie Mathison (Claire Danes), a CIA case officer who is bent on being right, and who is prone to erratic behavior and fits of rage when she is off her meds.

For the conspiracy theorists (and there are many) who insist that Israeli Prime Minister Benjamin Netanyahu paid off French Foreign Minister Laurent Fabius to scuttle a deal with Iran earlier this month, the series provides some substantiation of the French/Israeli nexus.

Saul’s wife, Mira, is having an affair with a handsome Frenchman, Alain Bernard. Just last week we learn that Bernard is actually a Mossad agent, who is, moreover, funneling information to the dastardly Sen. Lockhart.

There are still three episodes left in the third season, so anything can happen. Perhaps Brody’s mission will fail, or perhaps Saul (and the series’ writers) will come to their senses.

But “Homeland” has long since abandoned the promise of its first exciting season, when The New Yorker’s Emily Nussbaum hailed it as “the antidote for ‘24.’”

For those who may have repressed the memory, “24” was the Fox network’s action-packed, torture-rich, frankly Islamophobic series featuring the unstoppable Jack Bauer, who saved the world at least three times in any given 24-hour period.

“Homeland” was created by two men who were heavily involved with the earlier show, Howard Gordon and Alex Gansa. They seemed to have scaled down the testosterone quite a bit, going so far as to hint in the Showtime series that the US drone program was at least partly responsible for the further radicalization of the Muslim world (and for Brody’s desire to kill the VP).

But season three brings back “American exceptionalism” with a vengeance — a concept author Stephen Kinzer described as “the view that the United States is inherently more moral and farther-seeing than other countries and therefore may behave in ways that others should not.”

By all accounts, despite government bans, millions of Iranians are actively using social media; the Supreme Leader, Ayatollah Khamenei has his own Twitter account, and issues fatwas via Facebook.