Are we in for a season of Jennifer Lawrence haters?

Is Jennifer Lawrence the next Anne Hathaway? 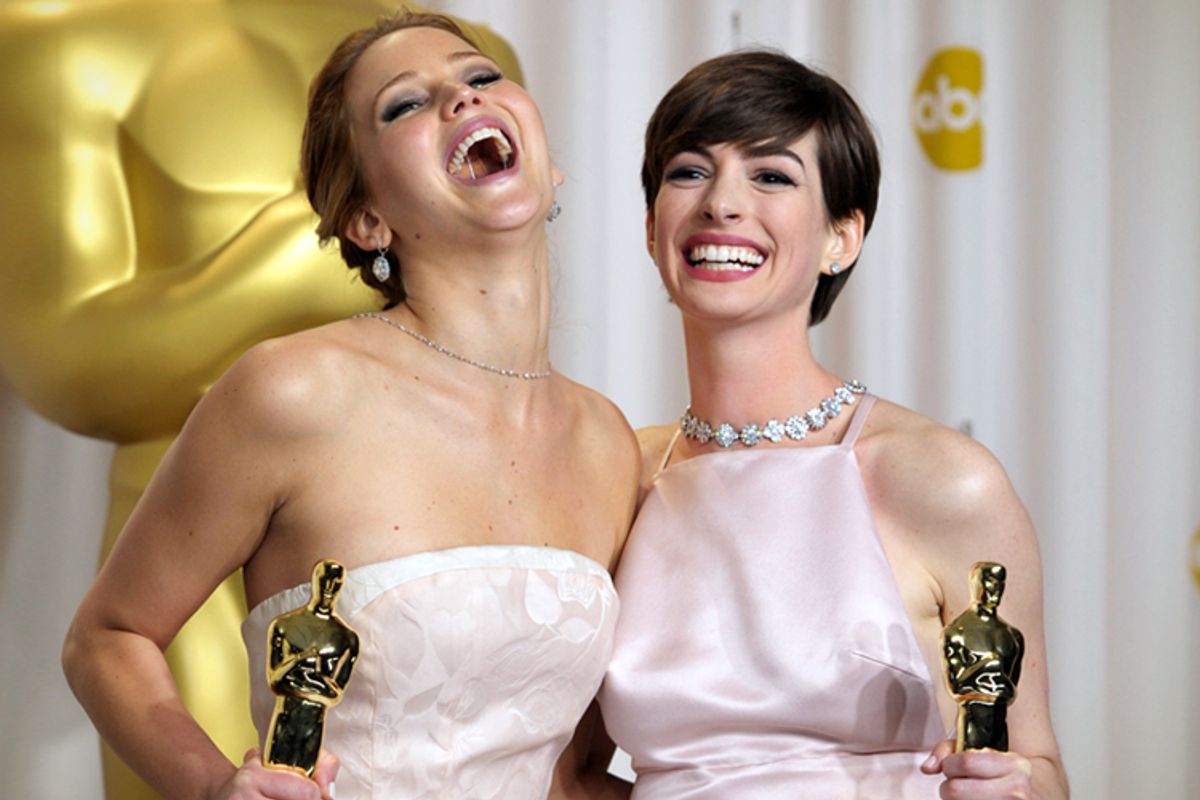 Last Oscar season saw a near-universal tide-turning; across entertainment media, a simmering disdain for the theatricality and the perceived self-regard of the actress Anne Hathaway erupted into "Hathahater" mockery so severe that the actress herself was forced to comment on it. Immediately after winning the best supporting actress Oscar for "Les Misérables" -- a moment that ought to have been the happiest of her career -- Hathaway told the press, "The miracle of the universe is that, as far as they know, there is 51% matter versus 49% anti-matter. Things tip in the scale of the positive and so that is what I focus on." That same press went on to make a story of Hathaway's purported hissy fit over a "Les Mis" castmate's gown.

Gliding over it all was the evening's best actress winner, Jennifer Lawrence, an actress who's had a truly charmed start to her career. Lawrence charmed the crowd by tripping over her diaphanous Dior gown, while Hathaway's hushed, prim-seeming "It came true!" speech was immediately pilloried. Lawrence went on from the Oscars to promote the ultra-hit "Hunger Games" franchise and to film "American Hustle," which after her win at yesterday's New York Film Critics Circle Awards has made her the front-runner for a second Oscar (already!); Hathaway has kept a very low public profile all year. Hathaway's bad press became self-sustaining after a certain point, as her particular combination of traits (perceived self-absorption and stiffness) chime so perfectly with the idea of a pretentious Hollywood actress. Lawrence's good press (as witnessed by shareable-content clearinghouse BuzzFeed's glowing and constant stream of Lawrence GIFs) became self-sustaining, too. The star was at once perfectly engineered for the meme generation -- her every action, from tripping at the Oscars to fending off Jack Nicholson's flirtations on camera, was charming and easily relatable -- and not engineered at all. She was and is a true natural, the answer to the "next Julia Roberts" question that had bedeviled Hollywood for more than a decade.

But culture abhors a vacuum. And just as Lawrence had quickly filled the space left over by Roberts at the head of the class, she may yet replace Hathaway as the object of weird transference and envy. Consider this piece on Vulture, which asks whether, like her character in "The Hunger Games," she is playing up certain aspects of her personality for the press (well, of course) and whether her appeal might dim in the years ahead. Lawrence is to be omnipresent for at least two more years -- the final "Hunger Games" is scheduled for November 2015, and she's in the "X-Men" franchise too. The piece makes the case that Lawrence -- perceived to be coltishly unaware of the effect she has and a simple girl-next-door -- is preternaturally savvy about the ways of fame in a way that won't wear well over time. Though Lawrence seemed to have won the P.R. battle with Joan Rivers when the comedian called her arrogant, Rivers' may come to be the majority view, if history is guide. Just look at how narrowly Lawrence seemed to escape awards season last go-round -- with people coming out of the woodwork to snipe at her apparent "wardrobe malfunction" at the Screen Actors Guild Awards (when her couture dress fell as it was designed to) and her joke about beating Meryl Streep to a Golden Globe. Another go-round will bring out those waiting for her to put a foot wrong.

Perhaps the reason it took so long to find the next Julia Roberts is because our society is so picky about what female stars are and are not allowed to do or say. Joseph Gordon-Levitt is twice as doofily theatrical and self-regarding in public as Anne Hathaway and, after they co-starred in "The Dark Knight Rises," she cruised toward a total reputational collapse while he made his directorial debut. Lawrence's relative realness -- just how is she able to handle so many interviews so smoothly and charmingly? -- is up for debate in a way her male contemporaries' never is.

People are free to like or to dislike any actor they choose, naturally. But the organized campaign against Anne Hathaway last Oscar season seemed less like a once-in-a-generation shift in public opinion and more like the way social media enables group thought now. Every Hatha-action was dissected ad infinitum -- her rushing the stage at the Golden Globes, for instance, to list names she'd forgotten in her acceptance speech wasn't just an embarrassing slip-up but evidence of narcissism. The media saturation of Oscar season coupled with the very modern volume of voices shouting combined to make Hathaway a persona non grata on TV screens even as she was the toast of the movie industry. After all, a GIF, like the ones of Jennifer Lawrence adorably tripping or goofing off, iterates endlessly; eventually one wants to close the window.