Green Swag: A lunchbox for people who take their lunch very seriously

Do you have what it takes to pack a healthy, waste-free meal? 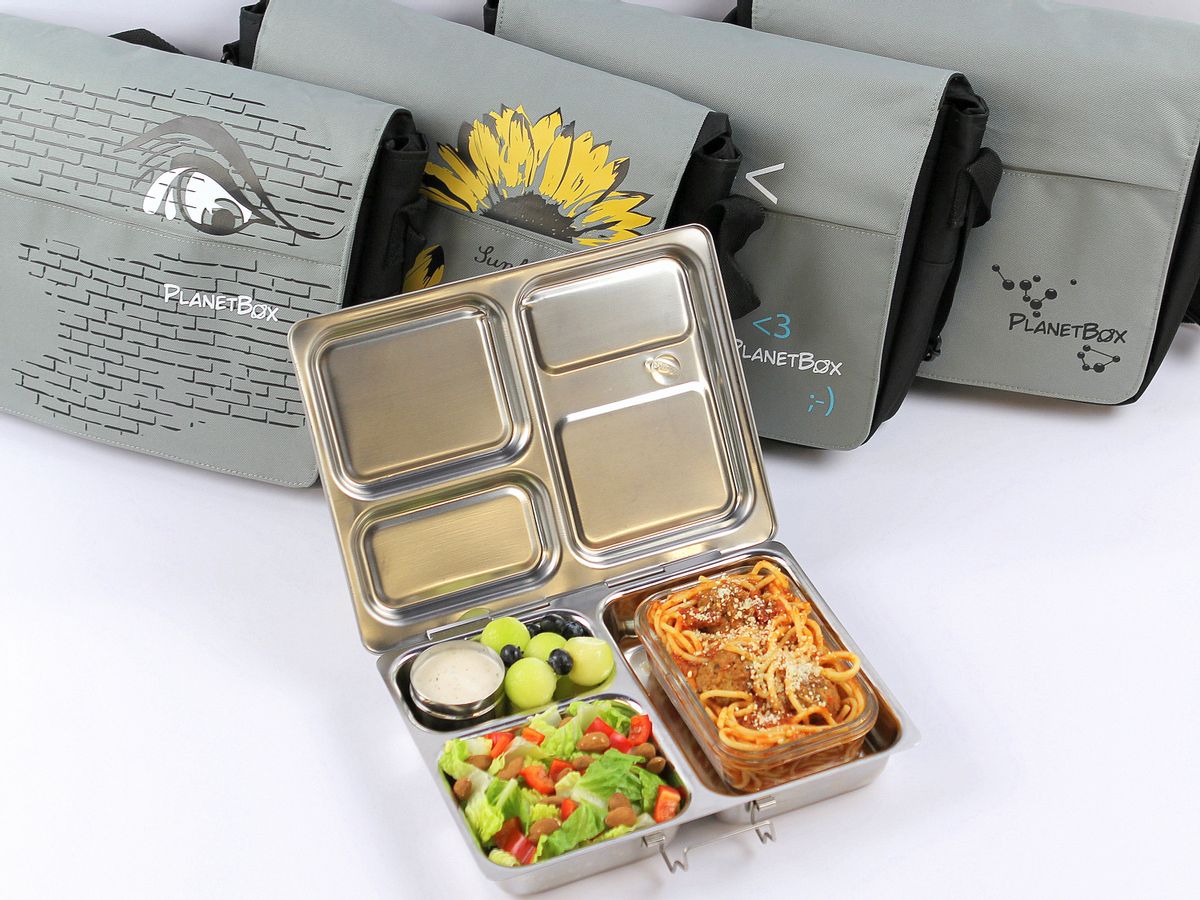 I used to think I was serious about my lunch. I tried to cook and pack my own food as often as possible, dutifully reheated leftovers and (almost) never allowed myself to subsist on a protein bar.

But mason jar salads aside, lunch for me has always been a mixed bag of Tupperware containers, sandwiches wrapped in tinfoil and baggies of fruit, with some prepackaged snacks tossed in. Preparing anything like a real meal is beyond the realm of possibility for a 20-something trying to pull herself together and make it across town to work at a somewhat reasonable hour.

So I wasn’t quite sure what to make of the PlanetBox, a lunchbox designed for the type of supermoms who have the time and energy to pack intricate meals for their offspring. (Actress Alyson Hannigan recently showed hers off on "The Ellen DeGeneres Show" – she goes so far as to cut her kids’ sandwiches into whimsical shapes.) Divided into separate compartments, the PlanetBox practically forces the user to pack a well-portioned, balanced meal. I got off to a good start the first morning filling its microwaveable glass container with the roasted veggies and quinoa I’d cooked the night before. Normally, I’d call that a lunch. But even packed tightly, the small dish held far less than I’d usually allow myself. And there were still two empty compartments waiting to be filled. At a loss, I threw together a side salad, making enough to fill the remaining two compartments. A three-course meal, I realized, is something to work up to.

Like some other green products, the idea for PlanetBox was partially inspired by Japanese culture: in this case, the bento box. Caroline and Robert Miros, the husband and wife duo behind the product, were looking for something similarly sturdy and reusable -- glass containers got them in trouble with their daughter’s kindergarten teacher -- that was designed for more traditional American diets. Hence, the PlanetBox’s acknowledged resemblance to a TV dinner tray.

Made of stainless steel, it’s advertised as a better alternative to wasteful, and potentially harmful, plastic containers. It even fits into its own insulated carrying case, with a slot for reusable utensils. The individual compartments, meanwhile, are meant to discourage prepackaged food: While I found one to be suspiciously protein bar-shaped, it also held a hearty portion of loose nuts. Used to its full potential, PlanetBox can enable an entirely waste-free lunch.

Holding lunch to such a high standard doesn’t come without sacrifice, though. Aside from not letting me get away with a supersize portion of food or a nice, fat sandwich, the PlanetBox weighs more than 2 pounds, empty. That’s the same as my laptop, and while both fit nicely side-by-side in my bag, my shoulder has already noticed the added weight. Even without bothering to try to make my food adorable, the box takes considerably more time to pack, compared to my old toss-snacks-into-a-bag strategy. But perhaps as a result of all that extra effort, lunchtime feels more special than it used to. It’s almost as if I were my own supermom.

I’ve yet to build up to an entirely waste-free lunch, but I’m getting there – the next time I go shopping, I’m going to buy loose trail mix instead of granola bars. Meanwhile, my lunchbox definitely stands out among the Styrofoam takeout containers and plastic shopping bags that stuff my office fridge. (Come on, Salon, get with it!)

The upside to the PlanetBox’s unwieldy weight is how solid it feels. Just holding it, you can tell it’s going to last for a long, long time. It’s the opposite of a plastic bag, which is liable to rip apart and send your food spilling onto the sidewalk in the short-term, but then failing to ever decompose.

-- The PlanetBox that I tried out (the “Launch” model) is the grown-up version of a product that was originally designed for kids. The compartments, which for me encouraged a more varied diet, are in fact intended for a much simpler purpose: keeping your food from touching.

-- The problem with high-quality, durable products designed to last forever is that sometimes you get bored of them, especially if you’re a kid (see above). To keep things exciting, each box comes with a set of magnets (mine feature sunflowers) that are easily replaceable when it’s time to redecorate.

--  Because leftovers are great, for preventing both overeating and food waste, the Miroses recommend bringing an empty PlanetBox to restaurants. The smaller, simpler “Shuttle” model is probably best for this.

Aside from reducing waste, a case can be made for the PlanetBox’s ability to promote health and save money. It achieves the first by laying out the way a meal is supposed to look – although I suppose there’s nothing to stop you from filling most of its compartments with candy. And small savings from buying food in bulk and eschewing reusable bags can add up.

Once you buy one, you’re set for a good long while, but the upfront cost is definitely high: anywhere from $40 to $80, depending on the model and accessories.

The PlanetBox demands a lot from its users, who must commit time and creative energy to their meals. Going out for a sandwich is easier. But approached right, the extra effort can pay off.