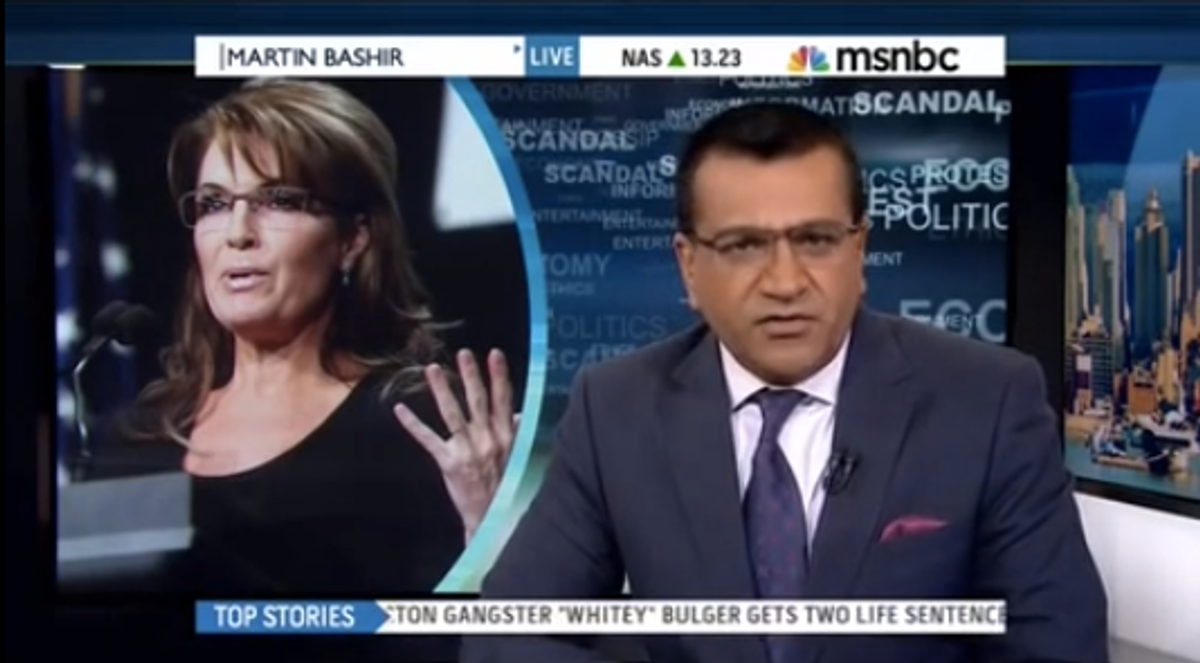 Martin Bashir, journalist and host of the eponymous MSNBC political talk show, has resigned following an outcry over his recent comments about Alaska Gov. Sarah Palin, in which he suggested that someone should take a shit in her mouth.

Bashir made the unfortunate comment in November, while blasting Palin for making an inappropriate and offensive comparison between the national debt and slavery. Instead of taking the Jon Stewart approach, however, Bashir didn't temper his open disdain for the "world class idiot" with any humor; instead, he recounted the story of plantation owner Thomas Thistlewood, who derived a vile punishment that had a slave "flogged and pickled, then made ... another slave, shit in his mouth."

"When Mrs. Palin invokes slavery," Bashir continued, "she doesn't just prove her rank ignorance, she confirms that if anyone truly qualified for a dose of discipline from Thomas Thistlewood, then she would be the outstanding candidate."

Though Bashir issued a lengthy apology on his program the following Monday, saying his comments were "wholly unacceptable," several media critics and television personalities called for his immediate ouster. As of Wednesday, Bashir has resigned from his program with the following statement:

After making an on-air apology, I asked for permission to take some additional time out around the Thanksgiving holiday.

Upon further reflection, and after meeting with the President of MSNBC, I have tendered my resignation. It is my sincere hope that all of my colleagues, at this special network, will be allowed to focus on the issues that matter without the distraction of myself or my ill-judged comments.

I deeply regret what was said, will endeavor to work hard at making constructive contributions in the future and will always have a deep appreciation for our viewers – who are the smartest, most compassionate and discerning of all television audiences. I would also wish to express deepest gratitude to my immediate colleagues, and our contributors, all of whom have given so much of themselves to our broadcast.’

MSNBC president Phil Griffin has accepted the resignation, saying, “Martin Bashir resigned today, effective immediately. I understand his decision and I thank him for three great years with MSNBC. Martin is a good man and respected colleague – we wish him only the best.”

Bashir is the latest anchor to leave MSNBC, following the abrupt departure of the perpetually incited Alec Baldwin.

This is all just another reason why MSNBC should hire W. Kamau Bell already.