The storied weekly earned plaudits for scaling back on print. Here's why it shouldn't have 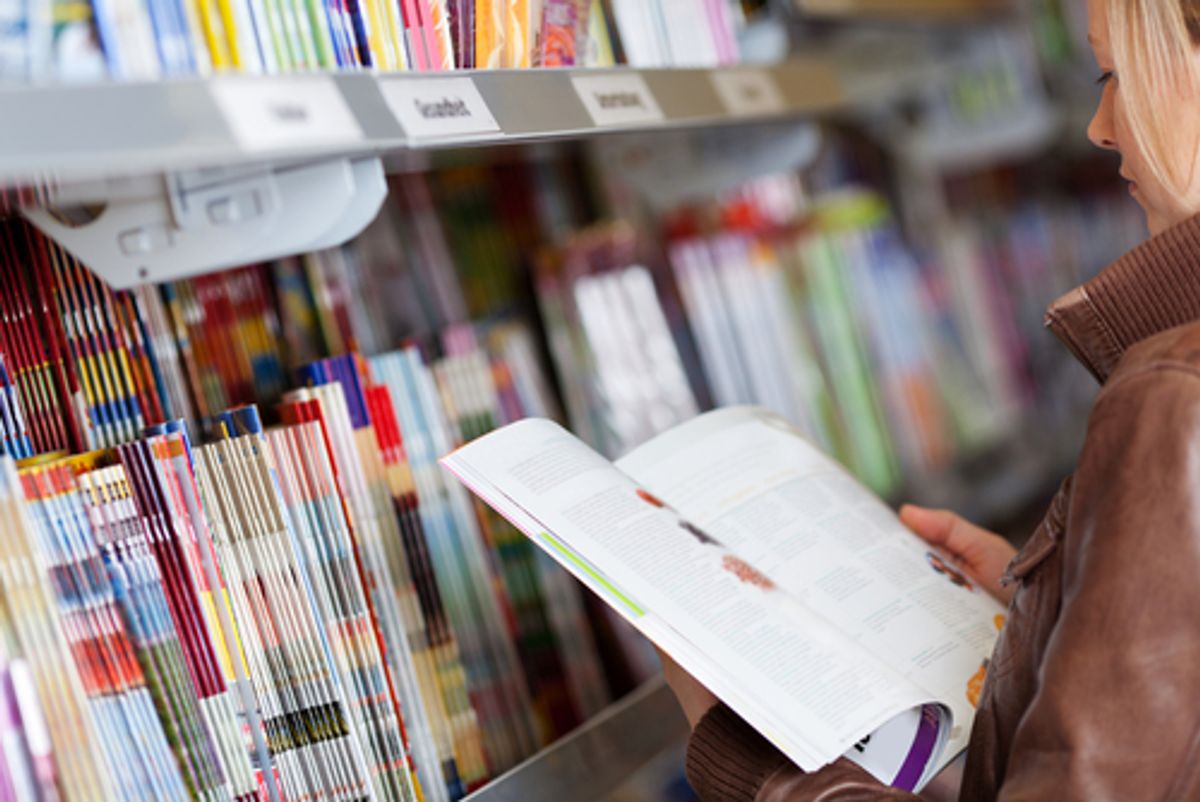 There’s a dismissive term that digital utopians and neoliberal let-them-eat-Macbook types use to describe people they consider mired in an analog, bricks-and-mortar, print-culture paradigm. When they aren’t calling these people “Luddites,” they knock them for being lost in the 20th century or, even better, “stuck in the ‘90s.”

So it was hard reading some of the responses to the latest news about New York magazine – the longtime weekly’s move to biweekly publication, the increased focus on its website, and so on – without thinking that many of the online responders were the ones who were stuck in the past.

There was a time when it seemed that more hits and increased online readership would “save” print publications, or rescue journalism. There’s plenty to suggest nowadays that isn’t the case, whatever the publications themselves might have to say on the matter. In fact, it’s not unheard of for print publications to champion record numbers on its website during the very same week they announce staff layoffs. Hits and online action typically have little or nothing to do with a publication’s financial health – and, thus, its ability to employ journalists or to invest in actual journalism

It’s no surprise that the company that owns the magazine would try to frame it all as progress: The optimistic, digital-utopian point of view was reflected in New York’s press release, which claimed it was "reinventing the print magazine as a more substantial, more durable, and more visual product, while growing its digital offerings” to produce an "enhanced biweekly."

What’s sad, however, is seeing people who are not collecting a P.R. paycheck from New York making a similar argument, one that ignores the larger context.

The Harvard Business Review’s Sarah Green, for example, penned a defense of the move (“Pubishers, Stop Crying Over Spilled Ink”), which began with what is purported to be good news:

I’m waiting for all the headlines about what a great time it is to be in the media business. After all, in a single minute, viewers on YouTube watch 100 hours of video — a 233% increase since last year. The number of devices people use to “consume content” — the anodyne catchall term we use to describe reading, watching, and listening — is also surging: a report by Cisco suggested that by the end of this year, the world would contain more mobile devices than people, devices that are increasingly used to find and share information and less used to make actual phone calls to loved ones. Speaking of which, we love content so much that we now spend more time looking at our phones than at our partners. Overall, our time spent taking in information is on the rise. In 2010, the average American spent 10 hours and 46 minutes a day consuming content; by 2013, that number had risen to 12 hours and 5 minutes.

So clearly, a lot of people are watching YouTube, or texting, or whatever. That’s certainly good for the people who own the tech companies, some of which are as rich as nation-states. It can sometimes be good for the owners and investors behind newspapers and magazines, too. But most people working for publications (at least, those not funded by the richest university in America) know that the wealth rarely trickles down to the creative class.

Even when examining only the most recent casualties, one gets a sense of the industry’s problems:

The MSN Networks – hardly a struggling company, what with Microsoft’s $79 billion in total equity – has killed virtually all of its original content, laying off numerous editors, contract workers and freelance writers in the process. (This included the “Dean Of American Rock Critics,” Robert Christgau, previously canned by a corporate-consolidating Village Voice.) The same goes for Bloomberg, which has laid off a number of its culture writers, as well as others across the newsroom. Britain’s Independent, meanwhile, had sacked all of its arts critics. And any number of professional photographers have been unceremoniously eliminated from newspapers – the Chicago Sun-Times most notoriously -- as well as from websites.

In some cases, these cuts are announced with cheery corporate jive: Portland’s Oregonian, once among the best medium-size papers for readers and employees alike, announced a shift of resources to the website – along with a reduction of print delivery to four days, and, oh yeah, almost 100 layoffs --- with a memo celebrating “exciting plans for the future of our company.”

To be fair, the Harvard Business Review’s piece was not the only defense of its kind. There were plenty on Twitter arguing that the changes at New York could be seen as good news, or at least as evolution. Time’s James Poniewozik, for one, tried his best to write an optimistic assessment, but found himself, near the end of the piece, conceding the key issue: “Advertisers pay much less per eyeball online, and the audience prefers not to pay at all.”

At MIT’s Sloan School of Management, Erik Brynjolfsson and Andrew McAfee have done years of research on the economic effects of digital technology. The two originally subscribed to the Industrial Revolution model: Technological developments cause temporary ruptures, which result in short-term job loss, but in the long run, great wealth and employment are created. (This is sometimes called "creative destruction," a term associated with the Austrian economist Joseph Schumpeter, and the title of my forthcoming book on the besieged creative class.)

But what Brynjolfsson and McAfee found in their research is that it just ain’t so: For what may be the first time in human history, technological advances are destroying employment permanently.

We’ve already seen this dynamic play out in Silicon Valley where, as the Weekly Standard’s Charlotte Allen points out, the initial employment surge brought forth by ‘90s dot-com frenzy has ultimately resulted in fewer jobs than before – Web 2.0 be damned.

In the case of publications, the key issue – why some websites, like Politico, make a lot of their revenues from print adjuncts, and why cranking up online traffic doesn’t typically take you far -- is advertising, and the lack of it online.

(Make what you will of Newsweek's decision to get back into the print media game.)

According to statistics from the Newspaper Association of America, a print reader is worth an average of about $539 in advertising alone, while an average online reader is worth $26. The money saved on printing and distribution doesn’t come close to covering the difference.

Logically, then, the dumbest move for newspapers would have been to convince their readers to abandon the print edition in favor of their Web site, where they’re worth between a tenth and a twentieth as much. Yet this is exactly what most of them have done. They’ve poured resources into free sites full of extra blogs, video reporting, and data-driven presentations. By improving their online offerings – and often raising the price of the print edition to fund them – newspapers essentially encouraged readers to stop buying physical copies.

Let’s go back for a moment to New York magazine, once among the birthplaces of the New Journalism.

That statement from the magazine — that no layoffs are planned? Anyone who’s been a working journalist has heard that one before. And when publication becomes less frequent – regardless of what goes on with the website -- it often leads to a death spiral in which subscriptions fall, so does advertising, then revenues decline. It generally does not end well.

As New York’s website (which does indeed have impressive numbers) continues to grow, and as the print publication shrinks or fades, there will be more New York “content” for eager readers. For writers, stories that pay at least $2 a word in print – the kind of pieces, typically, that require enormous amounts of research, reporting, reflection and editing – will become increasingly rare.

And the $3.5 million the magazine says it will save by cutting back on print? As Levine observed during a Twitter spat with Green, are we really to expect that New York will promptly invest this money into investigative reporting?

“This magazine that has been at the vanguard of Manhattan publishing for almost five decades,” wrote David Carr, “is acknowledging that the cutting edge is not necessarily a lucrative, or sustainable proposition, at least on the same schedule.”

I don’t mean to pick on Green or her article, which is intelligently written and not intended (from what I can tell) to be the last word on technology, media and culture. But when you see smart people – at places like Harvard, no less – writing pieces that overlook such important context, it’s clear that what Neil Postman called "Technopoly" is nearly complete.

It’s not that old ways are always better. Some websites, for instance, are quite smart, and a very few – Andrew Sullivan’s the Dish, for instance -- manage to be intelligent and still raise $800,000 in subscription revenue. Gawker – “We were not joking when we told you thousands of times that print is dead,” it offered in response to the New York news – makes plenty of money itself. Meanwhile, Glenn Greenwald’s new project could help restore some of the investigative journalism that publications have reduced as the Internet and recession destroyed their resources.

But so far, at least, the supposed steps forward have been, for the creative class, decided steps back. Until that changes, color us skeptical whenever a company announces its exciting plans.