Study reveals business leaders identify the wage gap as one of the planet's biggest problems. They had us fooled 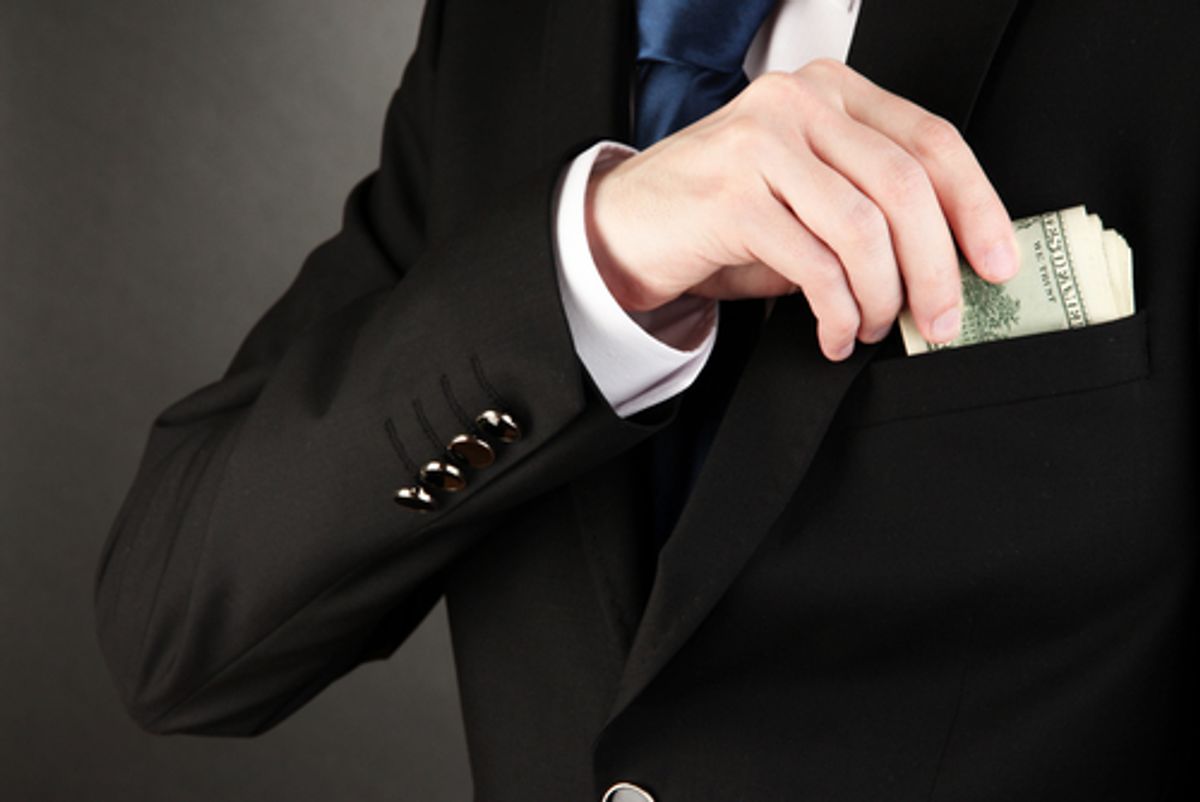 Global elites are getting a bit antsy these days.

A new study by the World Economic Forum based on a survey of 1,592 leaders from academia, business, government, and the non-profit world suggests that all is not cheery at the top. It seems that elites believe that the second biggest problem facing Planet Earth in 2014 is widening income disparities (unrest in the Middle East and North Africa is their top worry). When it comes to economic issues, elites and ordinary folks are often at odds, but according to a recent Pew survey, they converge on identifying the gap between rich and poor as a major flaw in the system.

What’s clear is that the schemes elites have supported, from austerity policies to financial predation, are driving inequality to such extreme levels that everybody is now talking about it. The Pope is talking about it. Robert Reich made a movie about it. All over the world, people having been protesting and rioting in rolling demonstrations about it. An ugly resurgence of fascist elements in Europe is capitalizing on it. Even folks like Larry Summers, who promoted policies that stoke inequality, are publicly lamenting it.

The global elites are sitting on piles of obscene wealth, but they also have two big problems:

The global situation is crazy and probably unstable, and the 0.01 percent knows it. The question is, what are they prepared to do about it?

Not much — not yet, anyway. You can peruse the top mainstream newspapers to get a sense of how most elites feel about the growing gap between haves and have-nots. Lately there’s been quite a bit of handwringing and an uptick of articles on subjects directly related to inequality, but precious few signs that any substantial changes are on the horizon.

Case in point: Just after Thanksgiving, New York Times readers found a moving article in the business section detailing the plight of unfortunate retail workers who don’t get paid enough to make ends meet. The author noted the hardship of food stamp cuts and described a situation so bad that companies had set up food drives for low-wage workers and dispensed tips on how to apply for public assistance

For a human touch, the NYT author quoted a depressed mom who works at Sears selling toys that she could never afford to buy for her own children. The author duly noted that Americans support raising the minimum wage by an overwhelming majority, but in typical mainstream media fashion, took a stance of  faux neutrality and provided the opinions of two mainstream economists who disagreed on whether raising minimum wage was a good idea or not. Overall, the article seemed cautiously in favor of something thatAmerican voters overwhelmingly say they want.

Conclusion: Some elites might be willing to raise the minimum wage just a bit.

But a couple of weeks earlier, the Washington Post ran a widely reviled editorialon Social Security that showed the limits of elite concern. The vast majority of Americans, aware of an oncoming train wreck of a retirement crisis, are against cuts to Social Security, but the editorial board at the Post made it clear that elites are not on their side and laid out various specious arguments, including an irrational appeal to deficit hysteria (the deficit is actually decreasing), to bolster its antisocial perspective. Elizabeth Warren, increasingly a thorn in the side of greedy elites, blasted the Post.

Conclusion: Elites are not really willing to pay taxes, and financiers wish to charge more fees on private retirement accounts, ergo Social Security must be cut. (Erskine Bowles and Alan Simpson, the co-chairs of Obama’s Deficit Commission, are the standard-bearers for this line, along with their backer, Wall Street billionaire Pete Peterson.)

You can also look to top establishment politicians for insight into just how much elites are willing to do to solve the inequality problem.

For instance, there’s the little matter of a giant loophole in the tax code that favors the rich. The “carried interest” loophole allows financiers like hedge fund managers, venture capitalists and partners in real estate investment trusts to pay a lower tax rate on their profits than working people pay on their earnings. It’s an unjust handout to the wealthy, and again, the American people are clear on how they feel about the tax code: the rich don’t pay their fair share.

The GOP is vehemently against closing the loophole. But despite the fact that Democrats raged against it last year to defeat Mitt Romney, it is Dems themselves who are standing in the way of getting anything done. As the Boston Globe noted in a recent article, Democrats are worried that “crusading against the ‘carried interest’ loophole at this stage would inflame an important source of campaign contributions for Democrats.”

Back when he was in the Senate, John Kerry did an elaborate dance around the issue, using his influential post on the Senate Finance Committee to seed skepticism and parrot industry warnings of dire “unintended consequences’’ and unnamed risks to the economy if the loophole were closed, even while voting in favor of the change. With Kerry now at the helm of the State Department, a host of other prominent Democrats, including President Obama and Senator Chuck Schumer, have been quietly working to see that nothing much will be done.

So there you have it. Global elites know that they have a vital interest in solving the problem of inequality, but few are willing to pay a dime or accept substantive changes to our economic system in order to solve it.

Perhaps the megarich will simply take shelter in armed and gated communities and continue to thumb their noses at the 99 percent until a mass movement rises to stop them. But many have a vague recollection of what happened in the French Revolution. At a certain point, the barricades don’t hold.