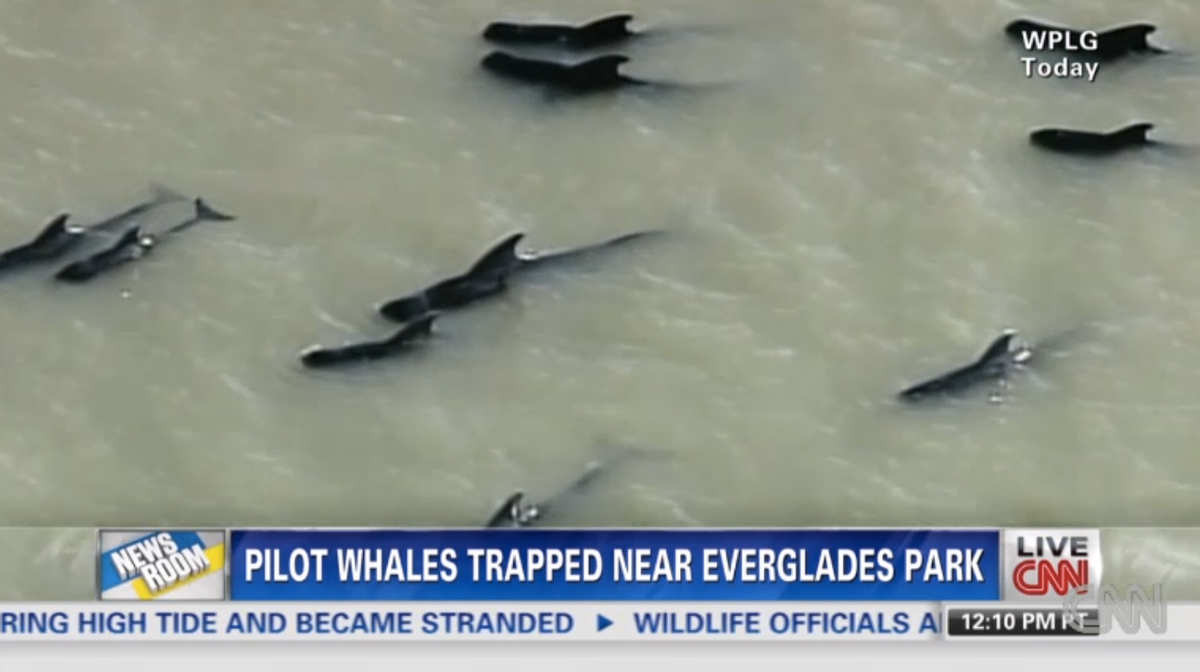 Update 12/5/2013 3:33 PM ET: At least 20 of the stranded whales have been spotted swimming in deeper waters, NPR reports, giving rescuers hope that some may survive the ordeal. They're currently attempting to chase the rest out to sea by banging on pipes and revving their boat engines. "We're going to do some herding and maybe a little bit of hazing, where we are trying to coax them out of the situation we're in now," NOAA stranding coordinator Liz Stratton told reporters.

The whales will starve if they aren't able to return to foraging in the deep sea.

Wildlife workers are returning to Everglades National Park in Florida Thursday morning to continue rescue efforts for the nearly four dozen pilot whales stranded in the remote area's shallow waters, but none are optimistic about their chances of survival. Six whales were already found dead Wednesday, and another four, which were beached, had to be euthanized.

"We want to set the expectations low," for the remaining whales, Blair Mase, a marine mammal scientist with the NOAA, told CNN:

"It's a very difficult situation" given the remote location and the terrain, Mase said.

Although there is a slight possibility the whales could swim out during high tide, Mase said, "I wouldn't set out hope for that."

"Even in high tide, you're going to have a series of sandbars and sand flats," she said.

Necropsies were being performed to try to determine why the pod carried out a mass stranding.

"At this point in time, we don't know why this particular group is stranding," Mase said.

In all, 25 people were involved in rescue efforts, including officials from NOAA, the Marine Mammal Conservatory and the Marine Animal Rescue Society, Mase said.

Despite the ambitious undertaking, experts acknowledge that strandings are relatively common. And since pilot whales are not endangered, the loss of the rest of the pod won't threaten the species.