The future can't be all white: Why Uhura and Beetee matter

From "Catching Fire" to "Star Trek," we need a vision of the future that lets us know we can all be somebody 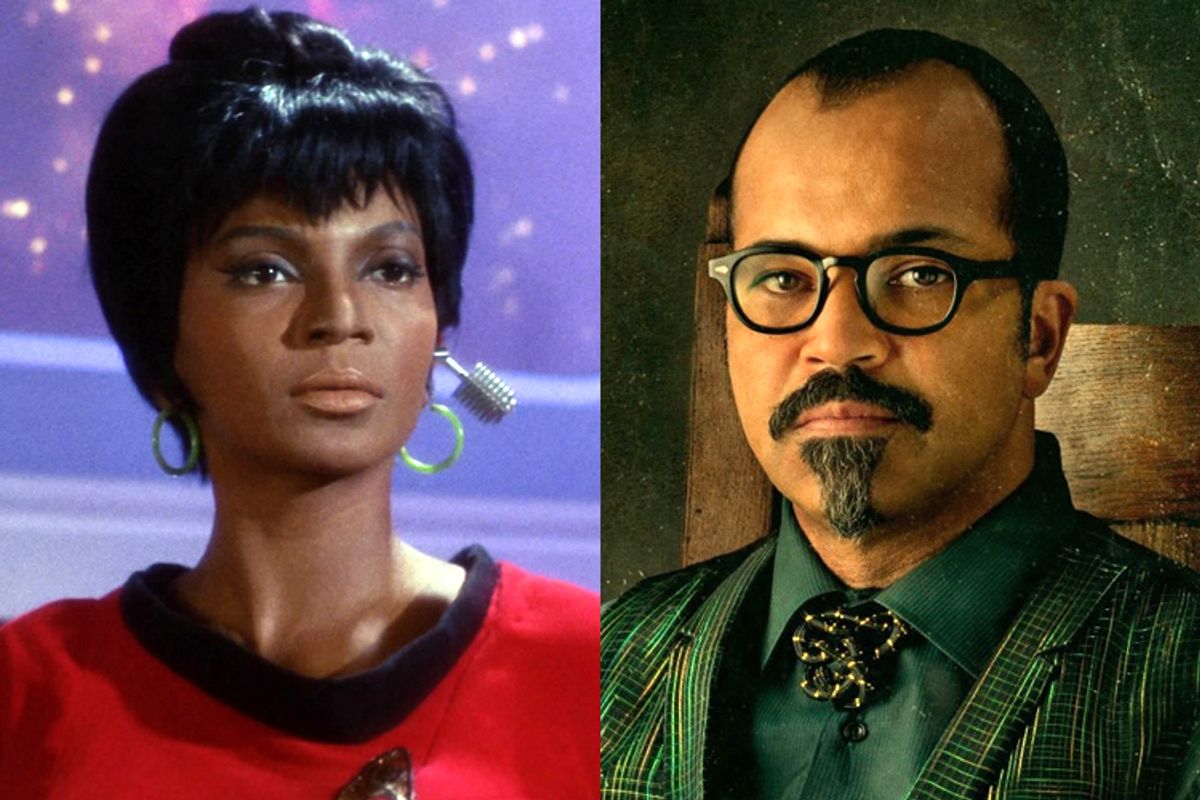 The recent release of "The Hunger Games: Catching Fire" has reignited popular discussions about the film’s social commentary on the present. The movie depicts a harrowing post-apocalyptic future where the poor slaughter each other for the entertainment of the wealthy in an extreme extrapolation of a "Survivor"-style reality TV competition. While much can be, and has been, said about the critiques of contemporary society embedded in "The Hunger Games," it's also worth rekindling the discussion about the films’ representation of a diverse futuristic society, and our reactions to that vision. These reactions say a lot about who we, as a society, think belongs in the future.

This is an issue that Americans struggle with. Remember what happened last year after the release of the first "Hunger Games"? Outraged viewers took to Twitter to complain about the presence of a black character in the movie: “Kk call me racist but when I found out rue was black her death wasn’t as sad.” This and other racist tweets sparked a debate about race in the film that raged for a few days on pop culture blogs.

Though it’s tempting to write such responses off as the rantings of a few bigoted fans, whatever the concerns around race in the film may be this year (there already has been tension and discussion around the character of Beetee being black), I urge us to look deeper and see that what’s at stake isn’t just about "The Hunger Games"; it’s about science fiction as a genre and its potential for social impact.

Science fiction is about possibilities; it’s about imagining alternative futures and envisioning worlds that transcend the constraints of current reality. In many of the futures portrayed in science fiction, film and television people achieve extraordinary feats of accomplishment: They save the human race, they destroy “bad” alien races, and they often make extraordinary advancements while traveling far into space. When we suspend our disbelief and sit down to watch science fiction (and plenty of us do so: According to the Numbers data on tickets sold and film revenue, science fiction films last year brought in billions in revenue at the box office), it can show us the boundaries we can cross and the weird, odd, amazing things we can achieve. Through my doctoral research in popular culture, race and gender, and during many discussions with students and colleagues, I’ve become further convinced that maintaining racial diversity in science fiction film and television is about more than just being “politically correct,” it is about showing people of all races shaping and participating in the future in meaningful ways, as important characters, contributing to the advancement and accomplishments of humanity.

No longer just for nerds, science fiction film and television has moved from the margins of popular culture to the mainstream. Though science fiction has been around for decades, the surge of science fiction in recent popular entertainment is evidenced by the success of James Cameron’s 2009 three-time Academy Award-winning film "Avatar," followed by 2010’s four-time Academy Award-winning "District 9," and the huge success of the first "Hunger Games" in 2012. Summer of 2013 saw the release of several sci-fi blockbusters including "Star Trek: Into Darkness," "Pacific Rim," "After Earth," "Oblivion," etc. Though not all of these were box-office hits, I think it’s safe to say that with big name stars, big budgets and devoted fans, science fiction is enjoying a wider audience and more potential for influence than ever before.

We only need to look to the original "Star Trek" television series (1966-1969), arguably one of the most widely recognized science fiction franchises in the U.S., to see the social impact and influence of science fiction. In particular, Lt. Uhura, a smart, compelling, black female leader aboard the Enterprise, played by the inimitable Nichelle Nichols, has inspired people around the world to imagine the future differently and see themselves in it.

In her second season of "Star Trek," Nichols decided she wanted to quit to work on other projects. However, a chance meeting with Martin Luther King Jr. changed her mind. Nichols met Dr. King at an event where he introduced himself as her greatest fan.  When she told him she was leaving the show, he asked her not to, saying she was a vital cultural figure. She remembers him saying: “You have the first important non-traditional role, non-stereotypical role … You are changing the minds of people across the world, because for the first time, through you, we see ourselves and what can be.”

Nichols decided to stay with "Star Trek" and as Lt. Uhura, she went on to influence people to see their unique potential and dream of the traveling to the stars—notably Mae Jemison, the former NASA astronaut and first black woman to travel into space. Jemison cites Nichols as Lt. Uhura as one of her greatest influences. Before her first flight into space Jemison even called to thank Nichols for her inspiration.

Then there’s this image illustrating the impact of Nichols’ character, drawn by Brazilian artist M. Steffens and accompanied by a quote from Academy Award-winning actress Whoopi Goldberg about the inspiration she drew from seeing Lt. Uhura. The image presents what appears to be a young Goldberg sitting in front of and looking up to a benevolently kneeling Lt. Uhura, but we can also imagine the seated girl in the drawing to represent other young black women seeing themselves and their hopes in Lt. Uhura — shaping the future and acting in it in a non-stereotypical way. Goldberg has spoken about Nichols several times -- in March of 2013 she appeared on a Dutch TV show and commented on the importance of Nichols as Lt. Uhura: “Without 'Star Trek,' people would think there were no black people in the future … before 'Star Trek' there were no black people in sci-fi movies and Lt. Uhura was the first black woman in space and she was beautiful.” Goldberg, who also had a recurring role as Guinan on “Star Trek: The Next Generation,” vocally credits her successes to watching Nichols play Lt. Uhura on television.

If America truly wants to be a pluralistic society, that pluralism must be represented in our visions of the future. So as we sit down to watch "The Hunger Games: Catching Fire" and other science fiction film and television, let’s remember that representation isn't just about what we see today; it’s how we see and shape our tomorrows. It’s about creating a vision of the future that lets us know that we can all be somebody, that we all belong in the future, and that the future belongs to all of us.

Alexis Charles is a PhD candidate in the Program in Modern Thought & Literature at Stanford University. Her research focuses on creative representations of the future and race, gender, and sexuality in popular culture.