When I met Mandela

I was a child. He was an old man. But he held the promise of an unborn nation 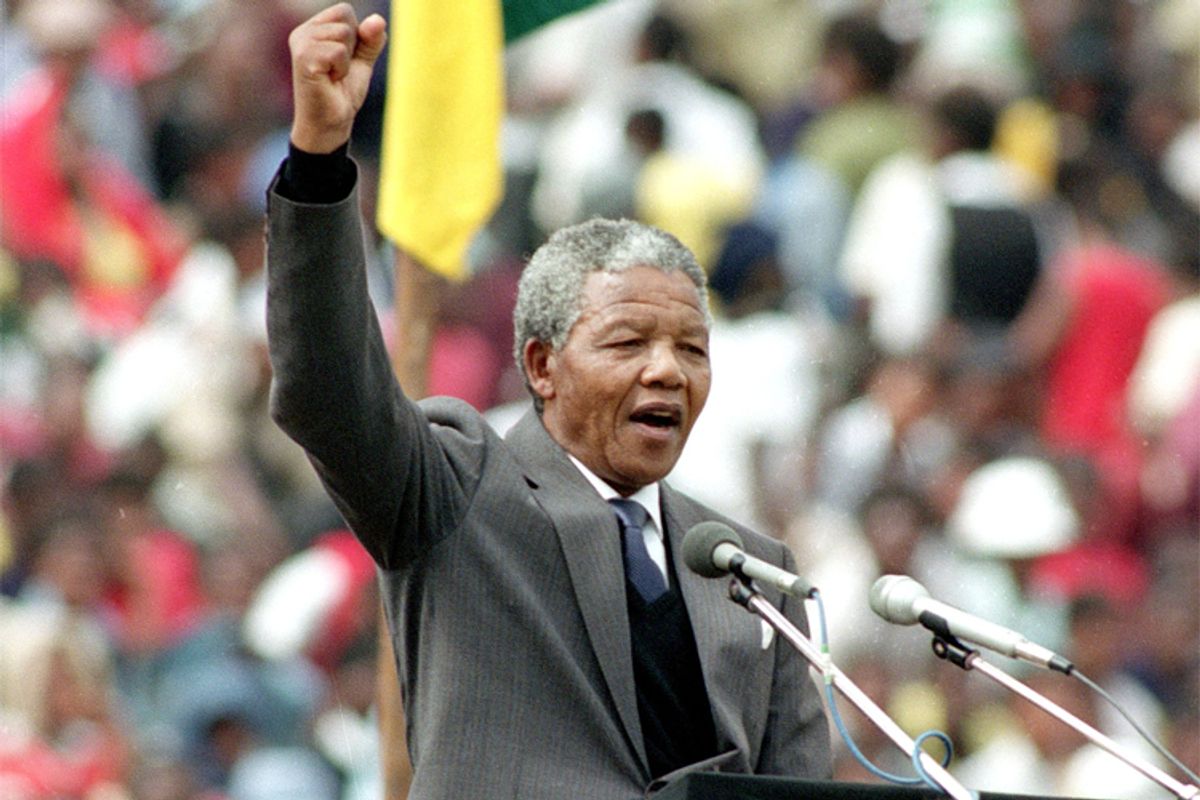 Nelson Mandela died Thursday at the age of 95. Read more on his legacy here.

The world was starting over the day I met Mandela. The birds and seas were already made, but our country was breathing a pregnant stillness. We were an unborn land awaiting new names. Just days ago, Mandela had walked free after 27 years in prison. Me, I had come here with my father. Mandela’s was a small house, a modest home that didn't know how to stand apart from the other two, three or four-room walled boxes Sowetans called home. He was a tall man. Slim. Old. Smiling.

My sisters and I didn't understand why our father had driven us here on a cloudless 1990 summer day, why he lifted us onto his shoulders and arms to peep into a stranger's backyard. Why did he insist we chant "Viva Nelson Mandela, Viva!" as the old man in the garden approached? And why were we so excitedly chirping in our girlhood voices, "Long live!" when my father belted out his call, "Long live the ANC! Long live"?

These were the days before our beginning, when everything was possible: The promise of war lurked thick in the air, the prospect of freedom threatened to swallow our land in its sweetness.

At 7, I was older than this new South Africa, waiting so heavily to be born, but I was far too young to remember the seeds that sowed us — the soil and sky that comforted Mandela in his life struggles. These were the same struggles of race and class that had plagued a young Mahatma Gandhi in Durban, South Africa, more than half a century before; struggles that would indelibly mark both men's lives, separating them only in how they fought for freedom.

Mandela was a hothead, an agitator who wouldn't accept the pacifist mind-set of the anti-apartheid African National Congress, which he joined in 1944. Since its founding in 1912, the party was led by learned men, landed gentry and nobility who were black, yes, but who were very much in their own class of blackness. The ANC’s eighth president, Dr. James. B. Moroka, was among the first South Africans to graduate from the University of Edinburgh, and certainly among the first black philanthropists to pay for the welfare and education of Afrikaner youth. The party's second president, Sefako Makgatho, for whom Mandela's second son was named, was an England-educated royal related to Sekhukhune, one of the most important 19th century African kings. These men felt rightfully threatened by the encroaching demands of white minority rule, but in the early years of the ANC, theirs was very much an elitist struggle; they sought a place at the table for Africans of their ilk. Speaking to other Africans toward the end of World War I, then ANC President-General Makgatho affirmed, " We do live under the Union Jack and we are proud of it, and we are ready to fight for it today as any white man." But the Afrikaner government ignored such gentlemen’s pleas, instead lumping all blacks, regardless of class or pedigree, into one distinct underclass: native.

And here we see Mandela rise. We see a man, in pushing for bolder leadership from the ANC, unafraid to question the wisdom of his elders and party, a party yet to shape itself into the voice of a people. Here he is in a 1952 photograph, burning his Native passbook in an unthinkable act of civil disobedience that replays itself over and over as blacks across 1950s South Africa followed the ANC's lead defying apartheid laws. There he is again, in his first television interview while underground in 1961, broad shoulders hugging a finely tailored suit, a carefully parted coiffure vainly self-aware, explaining in measured tones why the time for armed struggle is ripe, why loud bullets and unspeaking submachine guns cannot be answered with stones.

He stands here, at the 1964 Rivonia Trial dock, tall in his manhood, speaking the now famous words unshrinking in their death stare at imminent gallows, "During my lifetime I have dedicated myself to this struggle of the African people. I have fought against white domination, and I have fought against black domination. I have cherished the ideal of a democratic and free society in which all persons live together in harmony and with equal opportunities. It is an ideal which I hope to live for and to achieve. But if needs be, it is an ideal for which I am prepared to die."

I didn't know it then — how could I? — that the 72-year-old man I shook hands with in his Soweto home had already moved mountains to stand where he stood. And yet, his release was only the beginning. There was a new nation to be born: education and healthcare to promise, indoor plumbing and electricity to wire. The place he called our Rainbow Nation was still to be created, a nation he would periodically invite us into by showing us how he could call on apartheid architect Hendrink Verwoed's widow for tea without a teaspoon of bitterness buttered between cucumber sandwiches; or how he could sport a Springbok jersey during the 1995 Rugby World Cup for "our boys," who just happened to mostly be Afrikaners, who just happened to be playing a sport long associated with Afrikaner cultural dominance. There lay ahead for South Africa, to borrow the old man's words, a long walk ahead, a journey that began with his euphoric election in 1994; a journey that is today 19 years in the making.

And what of that country, the land that promised itself to us if we walked its long, unwinding road? What has it learned in 19 years from a man who is at once the moral center of our collective consciousness, just as he is a man formed from flesh; a man who glimpsed the ravages of HIV/AIDS on our horizon and failed, at painful cost, to press the national reset button toward a new kind of struggle? How has the party he helped hijack from an elite gentlemen's club into a full-throttle choir, boasting tens of millions of black and white voices, been indelibly changed by his mark? Where does Tata live inside the smallest reaches of our private minds, our most tender memories, inside our hearts?

If South Africa was ever a land waiting to be born, it didn't wait patiently. In its agitated gestation for what it could be, this land gave us a rebel and riot-rouser, aptly named Rolihlahla—one who shakes a tree. Without Nelson Rolihlahla Mandela, today's South Africa would not be. And yet, without South Africa, without its troubled past, Mandela — the Mandela of our monuments and museums, of our deepest humanity and highest Self — would not exist.

The funny thing, though, and I have a vague memory of hearing someone say this years ago, is that there are a million more Mandelas among us: there is a Mandela born every day. The struggles that produced Mandela were horrendous. His life's achievement is having eradicated the most heinous of those struggles for ordinary people like me. I have never had to carry a passbook. I have never been expected, as the apex of my career ambition, to care for another woman's children while wondering if my own would ever have regularly cooked meals or a warm bed.

But, I have seen inexplicable poverty in the new South Africa. Class struggles are overwhelmingly predetermined by skin color. And, as if in jestful irony, the ruling party has returned to its roots as an elite lobbying group for a privileged class of insiders — the ruling ANC is now lobbying itself for more favors for itself. In this country, the land is ripe for another Mandela. And yet, to speak such a thing is blasphemy. He is the apolitical religion that binds us. He is to us what Abraham Lincoln, George Washington and Obama's most electric currents of hope represent to even the most cynical American.

There is a beautiful praise song from the days before the country was born, a song that may have been sung on a day like the one on which I met Mandela, “Nelson Mandela! Nelson Mandela! Hauna o tswanang le yena” — There is none. There is none like you. When I'm alone, in my private thoughts, and this song crosses my mind, I remember the smells and sounds of being 7, in my father's arms, peering over a small concrete gate and holding Nelson Mandela's warmth in my tiny hands, my expectant heart waiting for the day we would tell this story, about the time the world started over and our country was born.