The 5 craziest moments from the Times' feature on "crazy ants"

The invasive species is taking over Texas 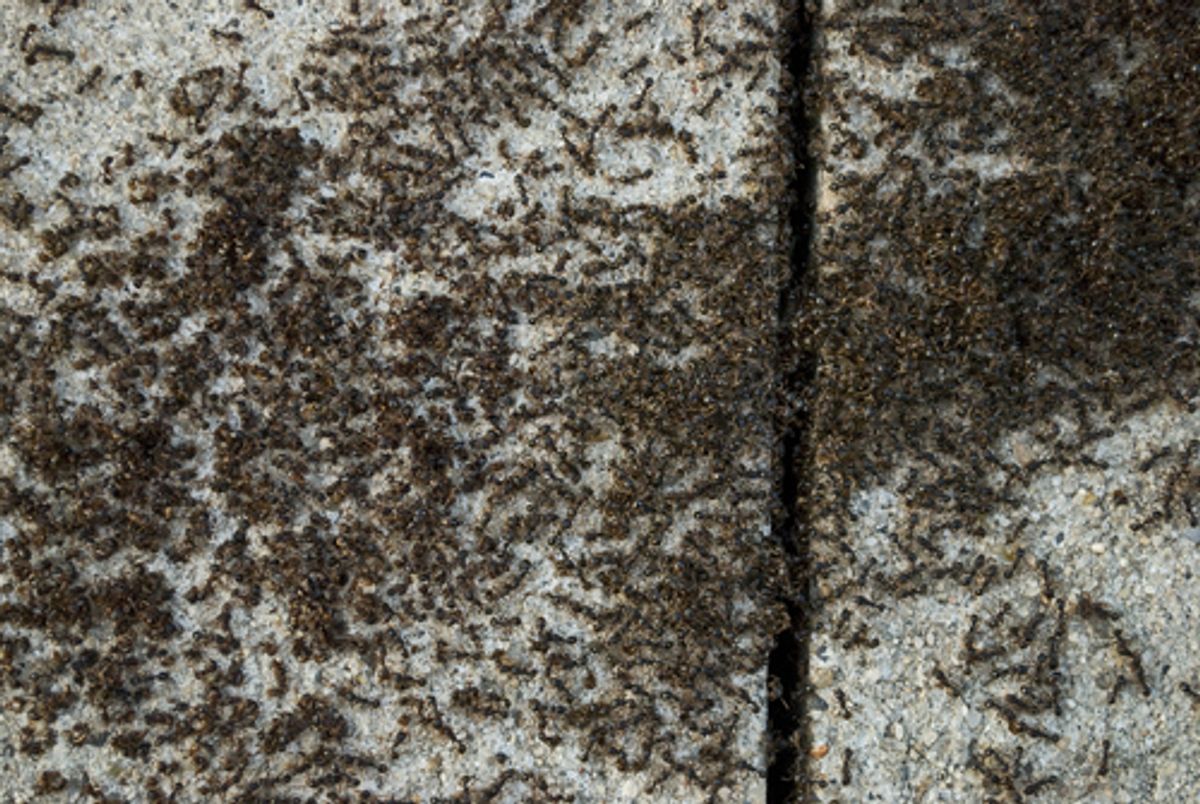 The New York Times' Jon Mooallem has a positively manic feature on crazy ants -- yes, they're actually called that -- an invasive species that has been steadily taking over southeast Texas since 2003. Mysteriously attracted to electrical equipment, and rumored to be responsible for the temporary shutdown of chemical plants, they've left those they've infested on the brink of madness themselves.

“You figure these stories are laced with hyperbole," a Texas A&M entomologist told Mooallem, "but when you get in there, it’s unreal." Below, some of the hardest-to-believe excerpts from the piece:

1. Mooallem describes the first time he encountered the ants for himself, in a rural area south of Houston:

Soon ants were spiraling up the tongues of my sneakers, onto my sock. I tried to shake them off, but nothing I did disturbed them. Before long, I was sweeping them off my own calves. I kept instinctively taking a step back from some distressing concentration of ants, only to remember that I was standing in the center of an exponentially larger concentration of ants. There was nowhere to go. The ants were horrifying — as in, they inspired horror. Eventually, I scribbled in my notebook: “Holy [expletive] I can’t concentrate on what anyone’s saying. Ants all over me. Phantom itches. Scratching hands, ankles, now my left eye.” Then I got in my car and left.

2. Mike "the Hog-a-Nator" Fogshee, whose suburban Houston home is infested, describes almost shooting his own foot off in frustration:

Recently, he and his wife were sitting outside, watching a pair of bald eagles settle into a pecan tree for the evening, when Mike looked down and saw one of his bare feet overtaken by ants. He remembers thinking, No, no, no, no, no, no, no, no, running inside and running back out with his AR-15, the assault rifle he uses to take out hogs. He was about to open fire on the ants until his wife chuckled and he realized how ridiculous the situation had become.

3. The semantic battle over what to call them:

The "crazy ant" moniker is simple enough: They're called that "because their behavior seems psychotic." They were originally called "Rasberry crazy ants" after Tom Rasberry, the exterminator who first discovered them in 2003 and who, despite the lack of a college degree or an interest in science, spent thousands of hours establishing proof that they were new to Texas.

Federal researchers rechristened them "Tawny crazy ants," but people are divided over which name to use. "The enmity between these people, I found, can be extraordinary," Mooallem writes. Rasberry himself, meanwhile, "has become increasingly disillusioned by all of this. For years, he felt he was watching government agencies and academics sputter around in circles, corkscrewing as senselessly as the ants. The actual bugs, meanwhile, just kept advancing."

4. The lack of government action against the invasion:

The breadth of America’s battle against invasive species can be hard to fathom. It involves 13 federal agencies and departments — obvious outfits like the United States Fish and Wildlife Service and the Forest Service, but also the Treasury Department. In 1999, something called the National Invasive Species Council had to be created to coordinate all these agencies’ efforts. The council’s deputy director, Chris Dionigi, noted the obvious challenge, systemwide, of responding to such a high volume of invasive species. “By the time a species is big and bad enough to get people’s attention, a local opportunity to fight it when it’s small enough to be halted has been lost,” he said. “Sometimes things can fall through the cracks.”

Rasberry crazy ants seem to have come pouring through one of those cracks. By appearing first in suburban neighborhoods and not, say, national forests or wildlife refuges or farmland, they colonized the territory between various agencies’ jurisdictions. The government’s system is reactive, not proactive, and so only recently has the species surged into regulatory view. (The Department of Agriculture still doesn’t consider the ants a “pest of agricultural significance.” But an employee with the Texas Parks and Wildlife Department told me: “It’s horrible. It’s like time bombs going off everywhere.”)

5. Mooallem's use of the ants as a metaphor for an entire country in upheaval:

“I think we’ve missed all the real opportunities,” Rasberry told me one afternoon. “There’s no way out.” We were having lunch at Central Texas Style BBQ, around the corner from his office in Pearland. On the television behind me, Fox News was reporting that shots had been fired at the Capitol in Washington. The full story, which we did not yet know, was that a 34-year-old dental hygienist from Connecticut had buckled her 1-year-old daughter into a car seat and tried to ram her black Infiniti into a checkpoint at the White House. There was a car chase, and snipers snapping into position everywhere, and people in business attire scuffling to safety every which way — scattering like ants, you might say, except that some of them could be seen grasping jumbles of paperwork or texting as they ran. No one in the restaurant paid much attention to the television. It was on mute. Sade was playing.

...Rasberry had worked through most of his ribs by now and was sinking a spoon into his banana pudding. “I’ll fix what I can fix,” he said. He is convinced that the next, obvious wave of damage from the crazy ants will be ecological: they will decimate ground-dwelling bird species, just as fire ants devastated Texas’ quail, and they’ll usurp nearly every other insect species until it’s all Rasberry crazy ants, everywhere. “You knock nature off balance, and ain’t nobody there to catch her,” he said. Entomologists speculate that crazy ants may eventually run into predators along the Gulf Coast. If that happens, their populations will crunch down to less spectacular — maybe even manageable — sizes. But, these scientists add, the damage done before that happens could be enormous. On the other hand, maybe this is as dystopian as the ant situation gets, and next summer will be better. We understand so little about these crazy ants; it’s hard to say what’s possible, or where they’ll go next.