Chess holds the secret to saving our cities 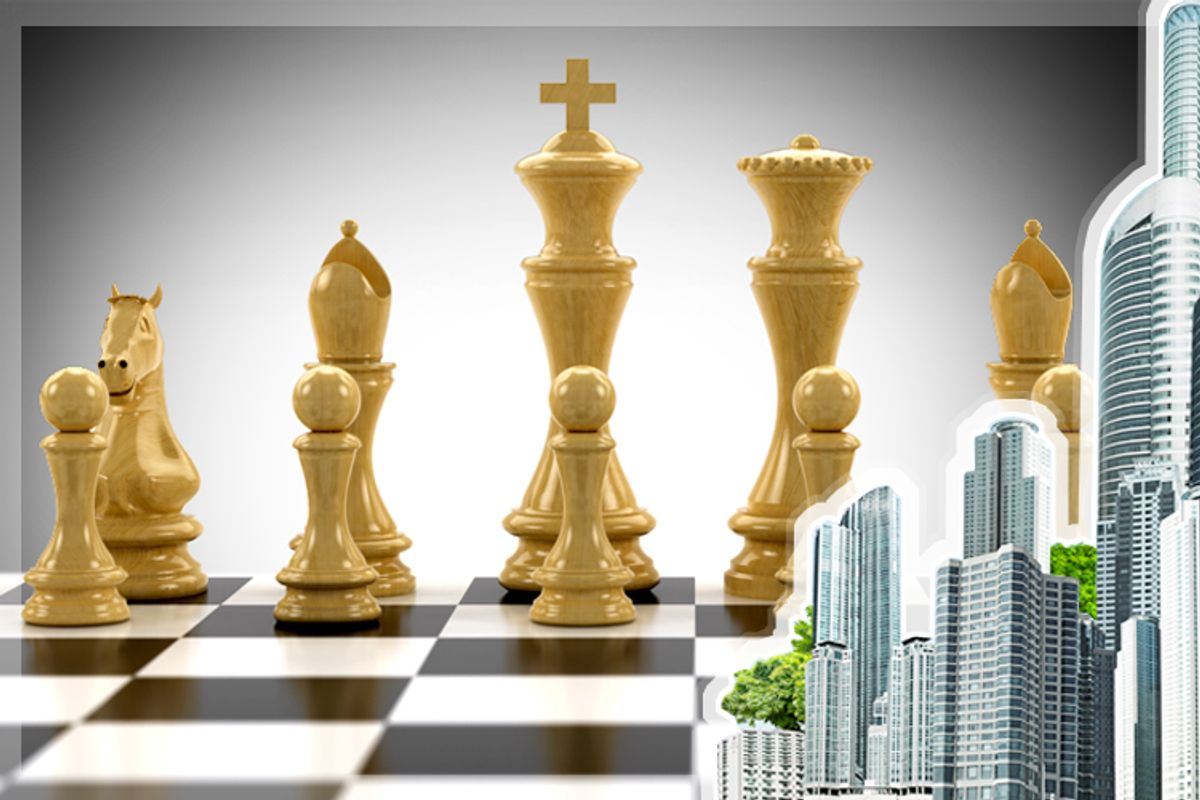 Pedro Ortiz is on a metropolitan planning mission. Like many urban theorists, he uses metaphors to illustrate his points, and his preferred comparison is to games.

Too often, Ortiz says, we think of the metropolis like a dartboard, one whose concentric circles of development decline in value and importance with distance from the center. This is the radial or orbital model of metropolitan planning, one that prizes centrality above all. It is, for Ortiz, a design whose failures have rendered it obsolete.

Instead, he suggests we imagine the metropolis as a chessboard, where every square plays a role and control of the center can be complemented by clever play along the edges. Ortiz calls this system of evenly spaced nodes and gridded traffic corridors the “reticular,” and it is his trademark method of planning. In a metropolitan scheme for Bogotá, Colombia, Ortiz actually placed chess pieces on a map, each corresponding to a particular sub-regional function: an airport, town center or commercial business district.

“Metropolises are not at all like cities,” Ortiz told me over the phone last week. Developing the regional plan for Madrid in the mid-'90s, Ortiz learned that metropolitan planning, in addition to foresight, requires coordination and sacrifice. “Every mayor wanted to be a queen. But their role was not to be a queen or a king but to be a knight, a bishop or a pawn.”

To make regions function as a whole, Ortiz designed the Metro-Matrix, a system marked by linearity – intersecting transportation lines organized around natural features – and numerous centers. It’s an idea that Ortiz, a senior urban planner at the World Bank, has since exported to cities as distinct as Cairo, Mexico City, Istanbul and Manila, and whose principles he expounds in a new manual, "The Art of Shaping the Metropolis." Given the pace of global urbanization, time is short. Looking onto unplanned slums spreading like oil stains around Accra, Ghana,  and Monrovia, Liberia, or doubling year over year at the margins of N’Djamena, Chad, and Amman, Jordan, Ortiz sees a time bomb.

At the urban scale, the grid is the oldest and most popular design we have. It brings obvious advantages to movement, organization, architecture and real estate in the city. But rarely has it been successfully deployed as a regional strategy.

In Madrid, confronted with a period of rapid growth and a plan a half-century old, Ortiz envisioned a new plan: His Metro-Matrix concept encouraged the development of important metropolitan functions like airports, housing developments and industrial parks – “centralities,” in Ortiz’s parlance — away from the historic center of the city, around a loosely woven net of highways and rail lines. This network would relieve congestion in the center city and open connections between formerly isolated suburbs. The importance of the densely populated historic core would be counteracted by sustainable peripheral development.

From the center of Madrid, these changes are difficult to perceive. But for those who work along the corridor of the new M-45 expressway, or inhabit housing developments organized around new rail extensions, the benefits of a reticular planning scheme are built into the routines of daily life. Commutes are faster; land values are more evenly distributed. The structure for metropolitan expansion is in place.

On paper, the plan’s linear emphasis appears almost oddly uniform, as if the entire region had been mashed in a waffle iron. But Ortiz was quick to insist that the checkerboard pattern, at the regional level, is not an imposition like a street grid, but a natural product of metropolitan territory — one that also emerged from the metropolises of Bogotá, Santiago de Chile and Nairobi, Kenya. “It’s finding the DNA of the metropolis," he says.

The secret, according to Ortiz, lies in the common geographical pattern that underlies many successful metros. "Metropolises have this strategic location, which is always the border between two ecosystems. And that provides for the linearity.” In Madrid, the matrix is a long, thin rectangle between the sierra and a river valley. In Bogotá, it spreads out from a hard edge at the foot of the Andes. In Cairo, a reticular is envisioned around the axis of the Nile, splitting in the north to preserve the Delta. In each city, the idea is to build around unique natural resources, not over them.

Madrid may not seem like the prototypical explosive metropolis; in the 1990s, its population was nearly stable. But a different sort of transformation was underway. Between 1974 and 1996, the residential space occupied by the typical Madrileño grew from 130 square feet to 215 square feet. The size of the average family dropped from five to three.  The amount of built land in the region – buildings, roads, etc. – grew correspondingly, by 50 percent in two decades. Ortiz’s plan was adopted in 1996, and has since served as a guideline to the region through a tumultuous period of growth and crisis.

In "The Art of Shaping the Metropolis," Ortiz explains that wealth, rather than migration or the birth rate, is the most important factor in planning metropolitan growth. “When you have wealth, you increase the amount of built space you use, not just your house — social facilities, commercial, offices, and so on,” Ortiz notes. In other words, the world’s slums have a lot more sprawling left to do. Depending on your temperament, and your belief in the efficacy of planning, this could be hopeful or ominous. Time remains to organize urban expansion in rapidly developing cities – because the greatest growth is yet to come.

Many of the cities Ortiz has consulted show annual population growth rates of 5 percent, enough to double the physical footprint of the city in 14 years. Others are growing faster. Almost everywhere, the standard of living is rising and family size decreasing, indicating grounds for further expansion still.

And many have neither the money nor the political capital to reserve rights of way for transit lines or safeguard natural resources from development – in other words, to engage in real predictive planning rather than the post-facto management that so often claims that mantle. Their solutions are often piecemeal, or simply fast, designed to demonstrate the accomplishments of shortsighted politicians.

Ortiz cites the bus rapid transit trend as an example. When BRT was introduced in Bogotá a decade ago, it was hailed as a model and an inspiration. Since then, the city has added more than a million residents, and it has become apparent that the buses are woefully unable to meet the city’s transit needs. Last year, Bogotans’ dissatisfaction over the system led to riots.

“When you’re dealing with a metro of 3 million, it’s not enough,” Ortiz says. “It doesn’t mean it’s bad; it’s not enough. For the circular system, it’s the same thing.” An orbital design worked fine for cities like Paris and Moscow up to a certain point. Then the concentric circles of ring roads began to feel more like nooses than beltways. The new Grand Paris plan, Ortiz notes with pleasure, involves Metro lines that don’t pass through the center at all. It’s a reticular plan, he says, though not one of his own.

Seeing how a metropolis can be reorganized with the reticular intersections of a checkerboard is not necessarily easy, and in some places, simply impossible. It’s a skill that Ortiz likens to what the German military strategist Carl von Clausewitz called the "coup d’oeil" — the ability to arrive at a battlefield and quickly understand the tactical advantages of the terrain. So too a metropolitan matrix can emerge from the arrangements of mountains, rivers and human settlements. A planner must learn to read a city and its surroundings, both the natural and the man-made, and plot a sensible grid for expansion.

“The difference,” Ortiz remarks, “is that in a battle, you’ll see if the general was right or wrong within 48 hours. In a metropolis it takes 40 years … and if you’re wrong as a planner, you don’t have many more chances.”