In defense of Upworthy: Why viral uplift might actually be good for us

Critics love to hate Upworthy's headlines, but is directing lots of people to stories about social justice so bad? 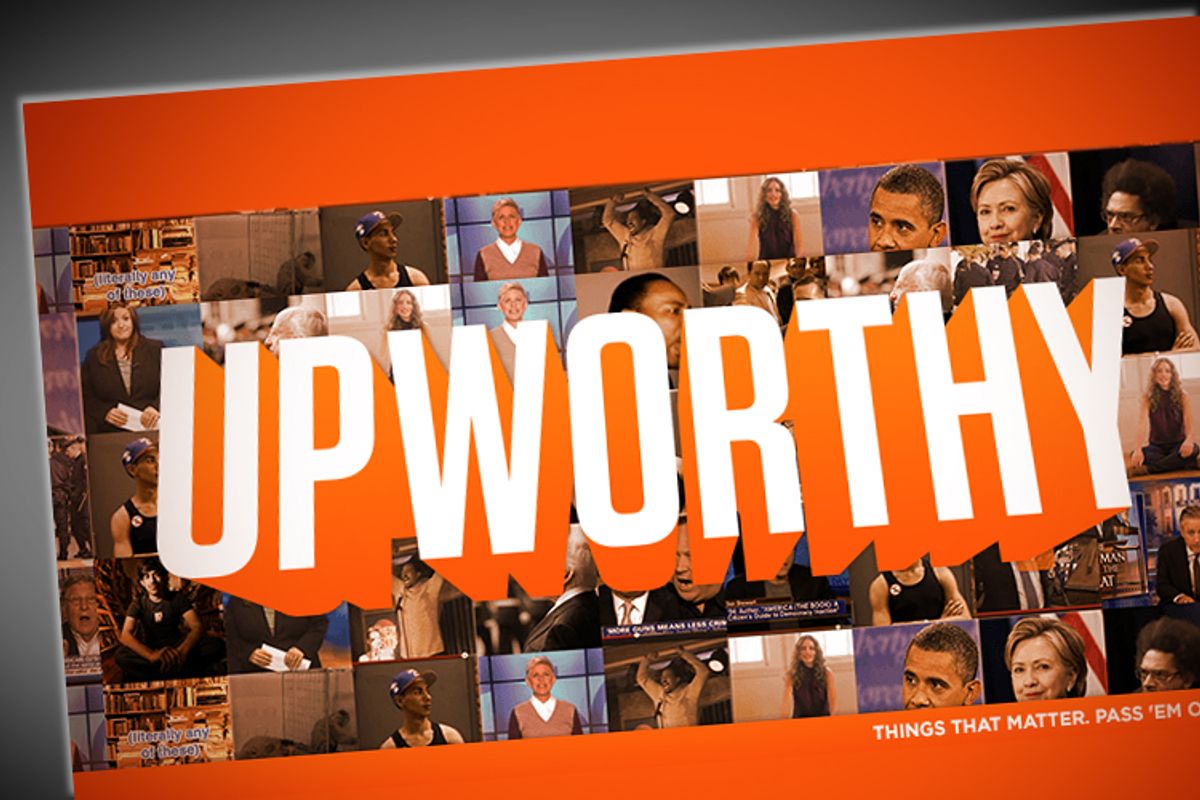 In his recent barnburner of an essay for Gawker, Tom Scocca drew on a vast number of sources (Sen. Joe Lieberman, the criticism of David Denby, Natalie Portman's "Black Swan" Oscar) to define "smarm," a cultural force that is the opposite of snark. Smarm, unlike snark, is widely approved of by its very nature; it is a relentless sort of positivity that shames the un-positive.

More important and more central in any discussion of smarm even than "Black Swan" is Upworthy, the website that's amassed huge traffic with a maddening, strange house argot that aggregates "uplifting" or "inspiring" news-ish stories. On the front page at the present moment, "These People," "This Guy," and "This Dude" are at the center of stories. (These People are models with disabilities. This Guy is a recovering alcoholic who gave a speech. This Dude made a video about fat-shaming.) Jane Fonda is reduced to "She" in a headline about a 2007 discussion she had — sorry, Fonda had — with Eve Ensler. The first-person "I" and second-person "you" both recur. I Couldn't Believe How Inspiring This Video Was. And Neither Will You.

Upworthy's success is aptly described by Scocca thus: "People want to be uplifted, and through social media people want to demonstrate to other people that they are the kind of people who appreciate being uplifted." The site whose structure Upworthy most closely resembles is BuzzFeed, which has specifically designed its articles towards shareability vs. other sorts of pageview-juking tactics (SEO, for instance). Upworthy elides specifics from its headlines, and relies on personal pronouns describing the sharer and the reader.

The uplift Upworthy provides is a cheap hit — and one that's inflected by the sort of presumed passivity that's lately dominated headlines. And yet, what harm does Upworthy do? In Scocca's formulation, whereby smarm "is a kind of moral and ethical misdirection," one whose "genuine purposes lie beneath the greased-over surface," Upworthy's misdirection seems a small thing. Bush administration officials (among the many historical examples Scocca cites) painted themselves as avatars of virtue in order to lead the country into perpetual war. Upworthy wants pageviews, which it obtains by fully crediting content creators and by sharing content that's among the least objectionable on the internet.

Broadcasting — aiming content at as broad an audience as possible — is hardly a new concept. NBC's recent ratings victory achieved by pairing the syrupy "Sound of Music" with the downright saccharine Carrie Underwood was done by finding something people would enjoy. Edginess — or "snark" — has a valuable place in our culture, but getting angry that it's not as widely enjoyed as uplifting material is like getting angry at the weather. The comparison with television doesn't even break down when contemplating "darker" hits: Even the ultra-popular "Breaking Bad" exists in a universe where justice is eventually meted out along rigidly proscribed lines that make the viewer smile. There's a place for true nihilism, but it's never going to be as world-beatingly successful as uplift, and that's okay — the essence of "snark" is afflicting the powerful, and there need to be powerful for the formulation to exist. In any case, Upworthy didn't create the present moment; it's simply a beneficiary, and its popularity means little more than itself.

And the subjects with which Upworthy finds success are, whatever one thinks of the site's headlines themselves, uplifting for being popular on a mass level. Who knew the public was so widely concerned with social justice, with equality between races and genders? Sure, the site encourages a sort of happy sublimity as one watches a video about, say, the laughably false PR face put forward by Walmart. One can close the tab at the end and do nothing. But how different is that from the response so-called snark encourages, which is to close the tab and seethe about one's powerlessness? Upworthy presents for its readers a wide breadth of pieces on society's ills along with outbound links to sites (Salon, on occasion, among them) where one can get more context.

One can navigate to Upworthy or not, but any frequent reader of the liberal internet won't delve too deep into the Upworthy archives before hitting a familiar article; the site seems a very conscious reaction against the meanness of sites like Reddit, where men's rights reign supreme. There could be a great deal worse than an ultra-popular site that links to The Nation with a brief summary.

As Scocca himself said, citing the work of Dorothy Parker and Hunter S. Thompson, "This belief that oblivion awaits the naysayers and the snarkers shouldn't survive a glance at the bookshelf." Upworthy won't kill skepticism or snark. It merely fills a void for the web users congenitally disinclined to read Parker-level criticism, one that would otherwise be filled by something yet dumber. Given the aesthetic graveyard that is the Internet, a silly headline on a subversive video in order to compel readers to click on a feminist or pro-worker video seems like a minor offense. Or even a service.