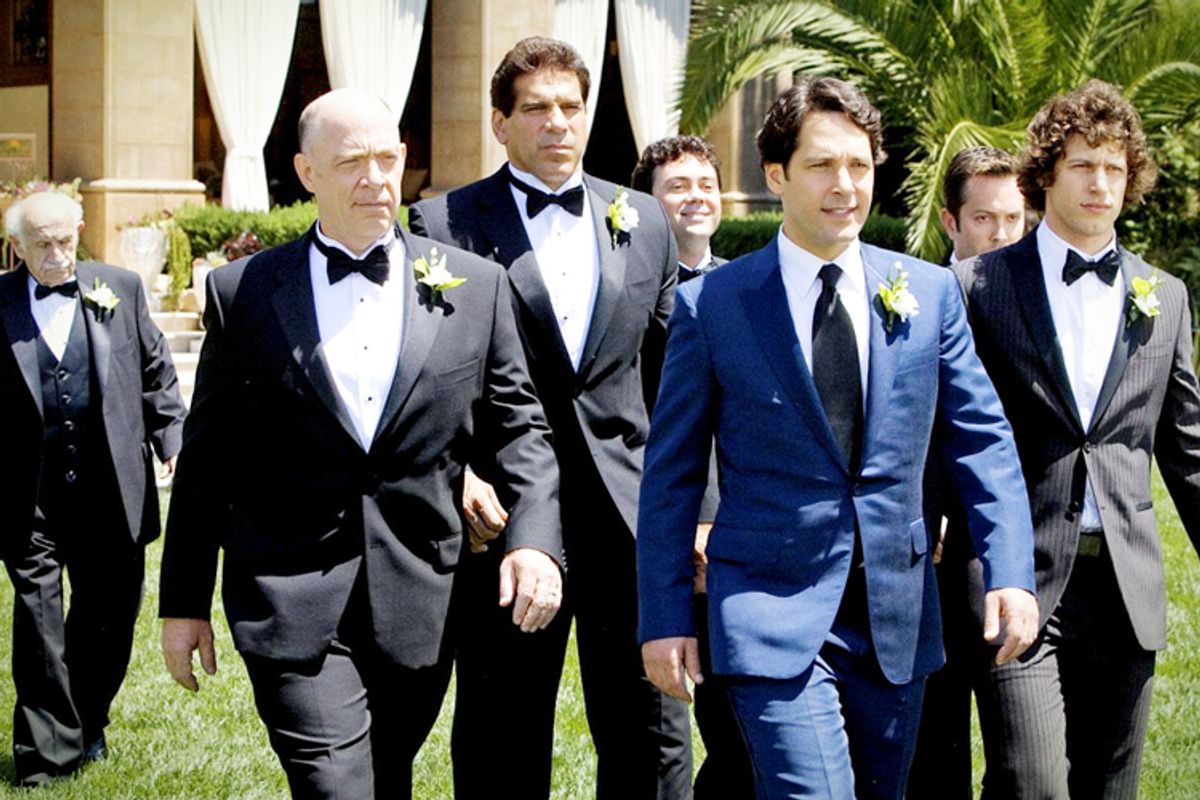 Of all people in America, adult, white, heterosexual men have the fewest friends. Moreover, the friendships they have, if they’re with other men, provide less emotional support and involve lower levels of self-disclosure and trust than other types of friendships. When men get together, they’re more likely to do stuff than have a conversation. Friendship scholar Geoffrey Greif calls these “shoulder-to-shoulder” friendships, contrasting them to the “face-to-face” friendships that many women enjoy. If a man does have a confidant, three-quarters of the time it’s a woman, and there’s a good chance she’s his wife or girlfriend.

When I first began researching this topic I thought, surely this is too stereotypical to be true. Or, if it is true, I wondered, perhaps the research is biased in favor of female-type friendships. In other words, maybe we’re measuring male friendships with a female yardstick. It’s possible that men don’t want as many or the same kinds of friendships as women.

But they do. When asked about what they desire from their friendships, men are just as likely as women to say that they want intimacy. And, just like women, their satisfaction with their friendships is strongly correlated with the level of self-disclosure. Moreover, when asked to describe what they mean by intimacy, men say the same thing as women: emotional support, disclosure and having someone to take care of them.

Men desire the same level and type of intimacy in their friendships as women, but they aren’t getting it.

In an effort to understand why men’s friendships are less intimate than women’s, psychologist Niobe Way interviewed boys about their friendships in each year of high school. She found that younger boys spoke eloquently about their love for and dependence on their male friends. In fact, research shows that boys are just as likely as girls to disclose personal feelings to their same-sex friends and they are just as talented at being able to sense their friends’ emotional states.

But, at about age 15 to 16 — right at the same age that the suicide rate of boys increases to four times the rate of girls — boys start reporting that they don’t have friends and don’t need them. Because Way interviewed young men across each year of high school, she was able to document this shift. One boy, Justin, said this in his first year, when he was 15:

[My best friend and I] love each other… that’s it… you have this thing that is deep, so deep, it’s within you, you can’t explain it. It’s just a thing that you know that person is that person… I guess in life, sometimes two people can really, really understand each other and really have a trust, respect and love for each other.

By his senior year, however, this is what he had to say about friendship:

During these years, young men are learning what it means to be a “real man.” The #1 rule: avoid everything feminine. Notice that a surprising number of insults that we fling at men are actually synonyms for or references to femininity. Calling male athletes “girls,” “women” and “ladies” is a central part of motivation in sports. Consider also slurs like “bitch” and “pussy,” which obviously reference women, but also “fag” (which on the face of it is about sexual orientation, but can also be a derogatory term for men who act feminine) and “cocksucker” (literally a term for people who sexually service men). This, by the way, is where the ubiquitous slur “you suck” comes from; it’s an insult that means you give men blow jobs.

So men are pressed -- from the time they’re very young -- to disassociate from everything feminine. This imperative is incredibly limiting for them. Paradoxically, it makes men feel good because of a social agreement that masculine things are better than feminine things, but it’s not the same thing as freedom. It’s restrictive and dehumanizing. It’s oppression all dressed up as awesomeness. And it is part of why men have a hard time being friends.

To be close friends, men need to be willing to confess their insecurities, be kind to others, have empathy and sometimes sacrifice their own self-interest. “Real men,” though, are not supposed to do these things. They are supposed to be self-interested, competitive, non-emotional, strong (with no insecurities at all), and able to deal with their emotional problems without help. Being a good friend, then, as well as needing a good friend, is the equivalent of being girly.

Of course, not all men buy into these prescriptions for male behavior, but these expectations do influence most men’s friendships at least a little bit. They mean that, to make good friends, men have to take risks. In a context in which being a man is good and being friendly is being womanly, each time a man tries to form intimate bonds with another man, he potentially loses status. Men who want truly close friends have to fight the instinct to protect their standing above all else. This isn’t easy, as they’ve been told for a lifetime that their status as male, and their place in that hierarchy, is a significant part of why they’re important and valuable human beings.

Men also have to find other men who are willing to take those risks with them. Knowing who to reach out to isn’t always easy, as men often wear a masculine guise, a mask that projects masculinity and hides the things about them that are disallowed. In one study of men’s experiences, one college-age man explained: “I am more of an emotional person. … I never really felt much like who I [pretended to be] because I [was]… putting my man face on.”

It’s tough to know who to reach out to and it takes courage to do so. Complicating things further, men can feel threatened by the initiation of intimacy and strike back to protect their own guise. Another college-age interviewee explained, “If a guy starts opening up to another guy, he will joke around like, ‘You look like you are ready to make out with me.’” “I have done it,” he confessed.

Finally, because men often don’t have a lot of practice being a good friend, men who value friendships with other men may have to teach others how to be friends. They may have to model friendship for other men or be understanding when their friends fail them and respond with greater disclosure instead of anger or dismissal (e.g., “it hurt my feelings when you didn’t call to see how my surgery went").  This calls on great emotional reserves, but it’s worth it.

Having a friend to whom you can disclose your feelings a major determinant of well-being. People with friends are healthier. They’re less likely to get common colds, to develop fatal coronary disease, to develop physical impairments or reductions in brain functioning as they age. People with friends are more likely to survive the death of a spouse without any permanent loss of vitality. Medical doctor Dean Ornish explains:

I am not aware of any other factor — not diet, not smoking, not exercise, not stress, not genetics, not drugs, not surgery — that has a greater impact on our incidence of illness, and [chance of] premature death.

Depending on which research you consult, people with good friends have a 22-60% lower chance of dying over a 10-year period.

People with friends are happier, too. Friendship is correlated with a more joyful life. If a person is depressed, having a friend interact with them regularly is as effective at treating depression as antidepressants or therapy. In old age, friends are more important than grandchildren for maintaining morale. According to sociologist Rebecca Adams, friendship is more strongly correlated with happiness than relationships with a spouse, children, parents or siblings.

Guys, it’s time. Man up and make some friends. We can’t do it for you. And I’m not saying it’s easy, but there’s every reason in the world to make friendship a priority.