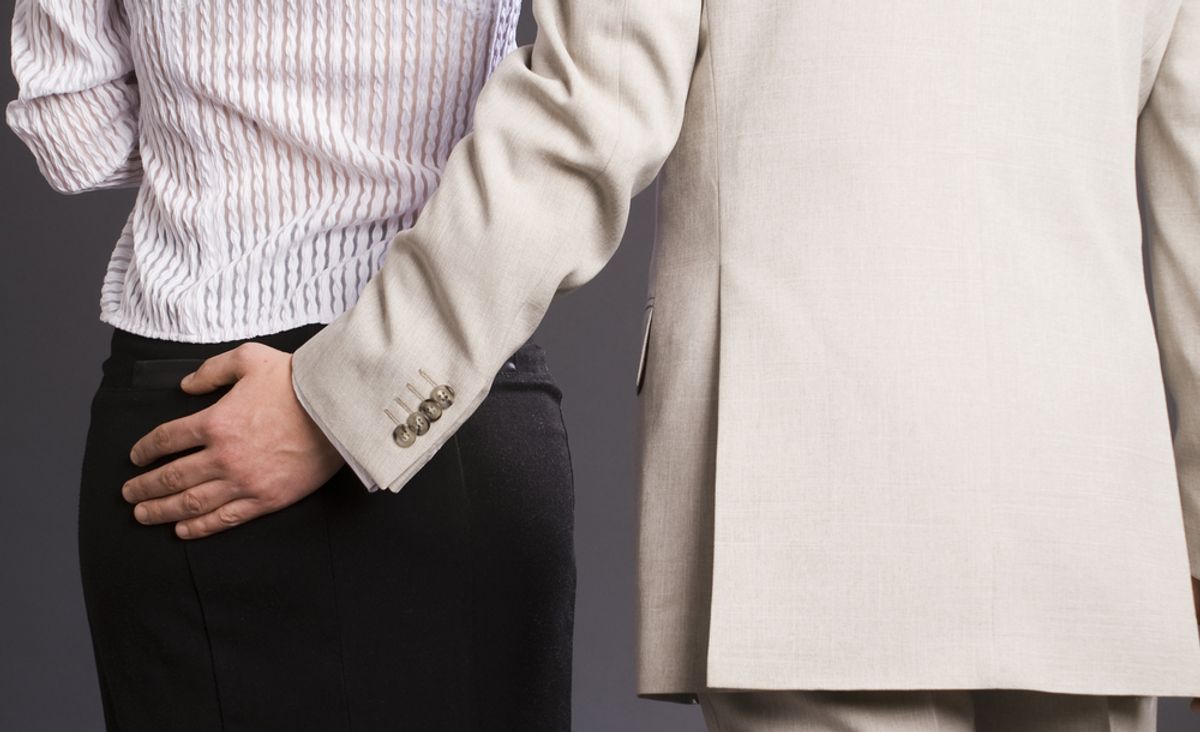 A boss committing a "love crime." ( Ydefinitel via Shutterstock)
--

Finally, after decades -- nay, centuries -- of unforgivable silence, someone has come to the defense of the men who sexually harass women. Naturally, the only website courageous enough to stand up for these men -- marginalized simply because they make their sexual thoughts and desires known to all women at all times, regardless of what these women may think or want -- is the Daily Caller. And, as per Daily Caller usual, the argument is airtight and perfect.

Just kidding. The Daily Caller is an Internet garbage nightmare, but Patrick Howley's "Liberals want men to stop checking out women" is so intentionally trollish and deals so heavily in our culture's worst assumptions about women and sex that it almost reads like a well-executed piece of satire about rape culture and the male gaze.

But it's not satire. It's a real piece written by an actual man who thinks these and other horrible things.

"In the progressive future, men will not be able to look at women’s bodies because that is a terrible thing to do — and science says so," starts this terrible piece, before launching into the offensive (and nonsensical):

Fifty-one percent of the U.S. population is a victimized group now. Don’t you know? Women are like Indians now. [Author's note: The fuck?] You can’t give them a once-over, a polite grin, and be on your way. You can’t notice the fruits of their several-hour morning project of preparing themselves to be looked at. Pretty soon, looking at a woman’s chest will legally be a “hate” crime instead of a love crime. [Author's note: see other author's note.]

It’s already started. There was the Massachusetts secretary who sued her boss for staring at her breasts. There was the social media uproar when two tech conference presenters in San Francisco made a joke presentation for an app based on men’s desire to stare at breasts.

Strange. It does not seem that a woman would take legal action against her boss for staring at her breasts if the reason she got dressed each morning was in hopes that her boss would stare at her breasts, but maybe Howley has some special insight into the cognitive dissonance of this woman's most secret desires. Or, you know, not that.

Howley goes on to compare sexual harassment to skiing, which, he says, may not be for everyone but is still a fine thing to enjoy. "Maybe catching a side glance of some cleavage on the subway isn’t for you. Fine," he writes. "But for those of us who enjoy that, it’s one more thing that we’re allowed to do in this country. I’m not big on skiing, but if I see somebody walking down the street with some skis I’m cool with that. Why ban things that you might want to try sometime?"

Then he says "tits." Because tits.

Howley's defense of male sexual entitlement and argument about women's complicity in their own harassment is the very definition of rape culture, something he dismisses early in the piece as some kind of shared progressive delusion rather than a real set of cultural and structural biases that perpetuate sexual violence.

But beyond that, Howley's belief that progressives are obsessed with "taking away" the fun of sex and sexuality is absurd. Howley isn't defending expressions of human sexuality, he is defending sexual harassment. There is a big, big difference.

And while shaming women for their sexuality is a well-practiced bipartisan activity (like skiing!), at the level of policy, it is Republican lawmakers who have really declared war on sex. By fighting comprehensive sex education in schools, restricting women's access to reproductive healthcare that empowers them to control their sex lives, trying to ban blow jobs, and by calling any woman with a prescription for birth control a slut. (Even those Republicans who wouldn't have used "that language" to describe the women they think are sluts.)

Howley's piece is disgusting and the Daily Caller remains, as ever, a very bad joke of a news website, but Howley did write the words "love crime" with some apparent level of seriousness, and for that he deserves some kudos. Because "love crime" is a hilarious phrase.