The comedian fielded questions about comedy, feminism, sobriety and more 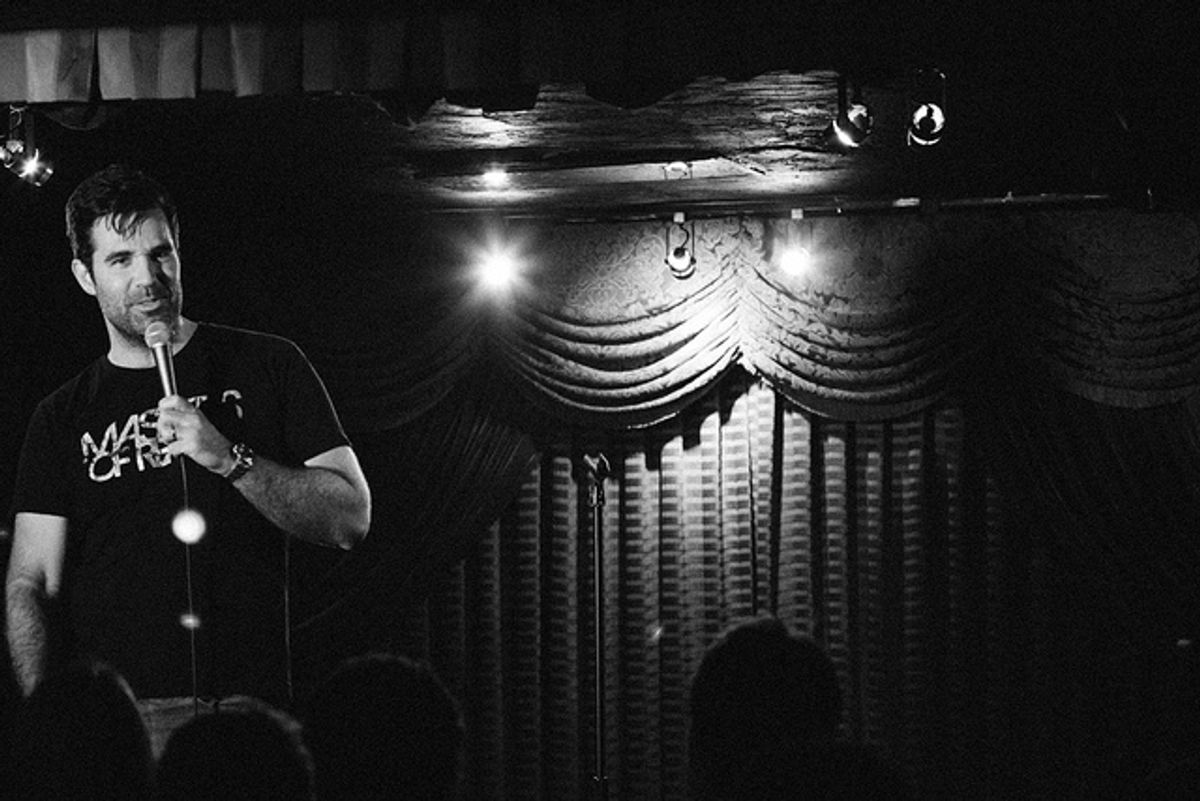 Promoting his recent book, "Rob Delaney: Mother Wife Sister Human Warrior Falcon Yardstick Turban Cabbage," comedian and Twitter star Rob Delaney took to Reddit to answer questions from fans that ranged from the predictably absurd (Question: "ur meaty? it's a question okay" Response: "I am indeed meaty.") to the intensely personal ("How did you overcome your alcoholism?"), matching the tone of his memoir, which begins with the story of how he hit rock bottom at 25 after blacking out while driving and crashing a car. Now, almost 40, Delaney, a proud father, feminist, and 11 years sober, is one of America's most famous stand-up comics. Read the best of his Reddit AMA:

I've read a bunch of him. I like him. He's somewhat antiseptic and does suffer from a top-heaviness, which is to say he's more "head" than "heart" in his writing, and I think that ratio really, really needs to be balanced to be great. Like I just read With or Without You by Domenica Ruta, who's obviously as "smart" as DFW but has much, much more warmth, thus I'd take her book to the moon instead of his. Though, again, I do like him a lot and have read 85% of what he wrote.

You are very kind! The response is primarily very positive. I just want to show that you can be a blustery hairy "alpha" male and a feminist at the same time. Plus, I love affirmative action. Misogyny will almost definitely outlast homophobia and racism on this planet and it's because of systems that were put in place forever ago and assiduously maintained and strengthened over the years. So we've got to tear those down. And when I say "we," that includes men. And guess what? MY LOT, as a straight white man, IMPROVES when women's lot improves. A rising tide raises all ships > there are more women then men on the planet > if we improve women's lot, the world is BETTER FOR EVERYONE. HOW DO PEOPLE NOT REALIZE THIS? It infuriates me, then I turn that fury into jokes, essays, basic human kindness and hard work to try and make the world a better place for everyone. WOE unto the man who doesn't actively try to make the world better for women. Regardless of one's spiritual beliefs, his soul will be torn apart by neon griffins in hell.

On how to have a career in comedy writing:

WELL you can absolutely have a career in comedy writing after you graduate even if you're in the midwest and your parents are whatever they are and blah blah etc. Just start writing now, even if you don't share it with people, or join (or start) a sketch writing group at your school and watch comedy in your free time so you figure out what you like/don't like and want to emulate, or what you want to do that you feel is inside of you but don't see being done elsewhere.
You could infinitesimally improve your odds by moving to LA or NYC or London after you graduate and take classes at UCB or ImprovOlympic or the Groundlings or somewhere so that you're around other funny, motivated people too. That helps. Then write and write and write and never quit. Other people will quit, but you won't, if you in fact really want to write comedy.

I like Mexican women. Very much. All of them.

Any with Margaret Atwood. WHY does she interact with me? I cannot believe it.

On his favorite public speakers:

The 3 best public speakers I've ever seen who radiated the most dynamism, fun and positivity are: Desmond Tutu, The Dalai Lama, and Ralph Nader. I'm sure the first two surprise no one, but Ralph Nader was SHOCKINGLY warm and human and funny and charming. Maybe 10 years ago I went to hear him speak and thought "This'll be informative" or whatever and he was just so fun and groovy. Weird, right?

I hit "rock bottom" when I slid out of my wheelchair and landed on the floor of my cell in jail and my bloody hospital gown slid up, exposing my penis, testicles and asshole to everyone in jail. I had to be lifted back into my wheelchair by two samaritans since my arms were broken and my legs were in these leg stabilizer metal/velcro things that didn't allow my knees to bend. I was in this condition because I'd driven a car into a building some hours before. Before I was taken to jail I had to ask the arresting officers in the emergency room if I'd killed anyone, because I didn't remember anything. They told me no.
It was the realization that my drinking could very easily kill other people that made me finally quit, after years of trying. At the time I didn't care if I died, but I didn't want to take anyone else with me, or worse, kill someone and not die myself. When the cops told me I didn't kill anyone, I decided not to kill myself and get sober. That was just under twelve years ago.

I don't drink any alcohol and I don't do any drugs now. I don't proselytize; if other people want to drink, great. I just found that it was, for me, impossible to drink even a little without wanting to drink more. Before I got sober 11 years ago, I tried a few times to quit, then after a spell would say "OK, I'm going to keep it under control this time," then invariably it got horrible pretty quickly. So I condone "not drinking at all" for me personally. I'm maybe 5000 times happier now, and also alive and not in jail.