The right's new litmus test: "Do you hate Mandela enough?"

Newt Gingrich is in trouble with GOP nuts because he praised Nelson Mandela. He's obviously a secret communist 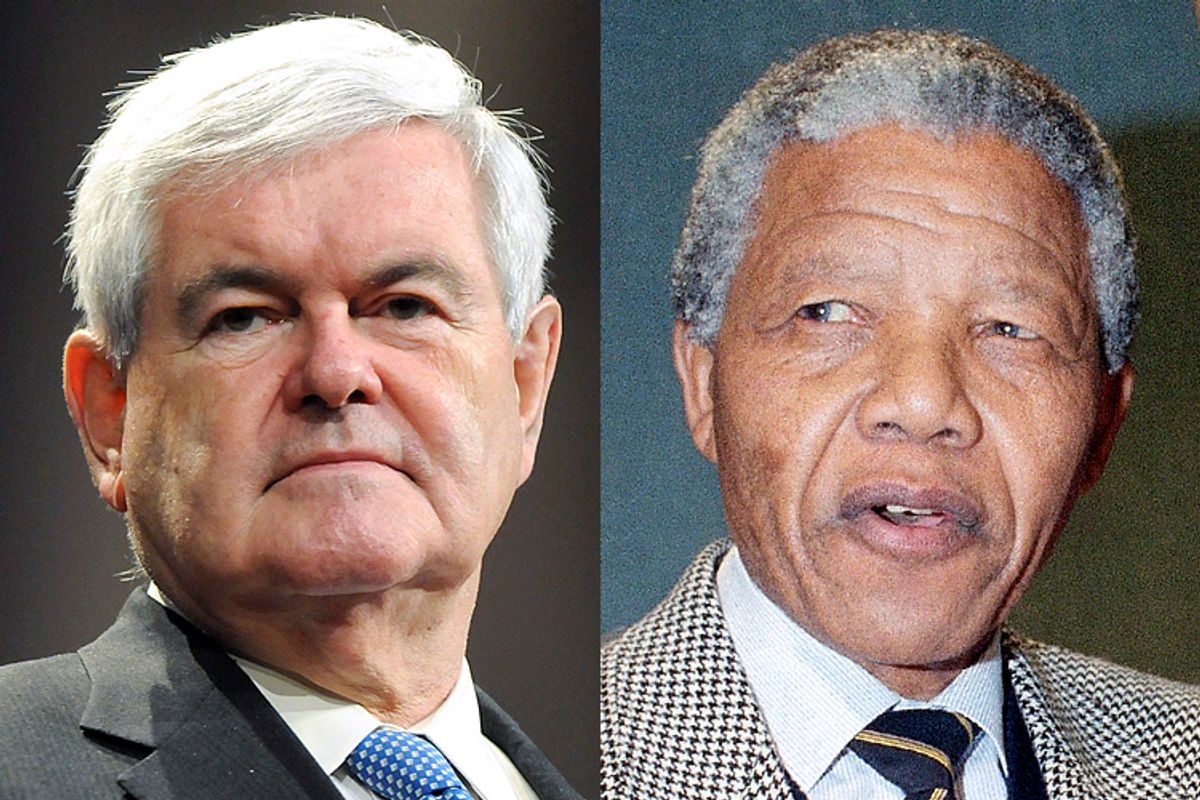 And so we come into a new week with a new litmus test to end all litmus tests for True Conservative politicians: Do they have kind words for the recently deceased Nelson Mandela? Because if they… do?… then they may be secret liberal communists who love terrorism.

Most people in the world went on their Facebook or Twitter pages last Thursday night to share some positive thoughts or a quote after the former South African revolutionary-turned-president died at 95. "Most people in the world," in this rare case, included the Republican politician Newt Gingrich. Gingrich -- admirably -- was one of the House Republicans who (tried) to push President Reagan to speak and act more strongly against the apartheid government in the '80s.  It is a stance he is deservedly proud of taking. And so he wrote on Facebook:

President Nelson Mandela was one of the greatest leaders of our lifetime.

He emerged from 27 long years in prison with a wisdom, a compassion, and a commitment to helping other people that was astonishing. His life was a triumph of the human spirit.

When he visited the Congress I was deeply impressed with the charisma and the calmness with which he could dominate a room. It was as if the rest of us grew smaller and he grew stronger and more dominant the longer the meeting continued.

His thoughtful, disciplined, but friendly and warm personality made him a leader who could define the right policies and the right behaviors.

Nelson Mandela was truly the father of an integrated, democratic South Africa.

He will be an inspiration for generations to come and an historic leader worth studying for as long as people want to learn about greatness in serving others.

Callista and I extend our condolences and our prayers to the Mandela family and to the people of South Africa.

• "Newt, I was rooting for you to win the primaries and become the next president; please tell me your joking!! Mandela was a commie murderer!!"

• "Such an amazing re-write of history since 1962 and 1990. Newt, I thought you of all people, a historian, would be true to who this guy really was."

• "He hated America, Newt. Quit pandering to the blacks."

• "This is what our kids are being taught in the school system.....all propaganda....is it any wonder why we are in the shape we are in???? The thinking of the people = the leadership we have today!!! We have past the point of no return!!!!! If your kid can leave college without becoming a flaming liberal.....IT WILL BE A MIRACLE!!!!!!!!!!!" [Ever notice how people who complain about the liberal lies being taught in the school system always seem to believe that there are five periods in an ellipsis? - Ed.]

• "at least Mandela made no bones bout who he iwas unlike our current prez! Hell we have a commie , socialist, Marxist, muslim now!"

"NEWT GINGRICH HAS INSANE FACEBOOK FOLLOWERS" isn't exactly A1 news material. What is, though, is that Gingrich decided to write another post pointing out -- on this one of many opportunities -- that all of his Facebook followers are insane. Dangerous waters, there. Maybe GingrichProductions.com needed a little traffic boost? Eh, whatever, his response was eloquent and shit, +1:

Yesterday I issued a heartfelt and personal statement about the passing of President Nelson Mandela. I said that his family and his country would be in my prayers and Callista’s prayers.

I was surprised by the hostility and vehemence of some of the people who reacted to me saying a kind word about a unique historic figure.

So let me say to those conservatives who don’t want to honor Nelson Mandela, what would you have done? [...]

I would ask of his critics: where were some of these conservatives as allies against tyranny? Where were the masses of conservatives opposing Apartheid? [...]

Nelson Mandela emerged from 27 years in prison as an astonishingly wise, patient, and compassionate person.

He called for reconciliation among the races. He invited his prison guard to sit in the front row at his inauguration as President. In effect he said to the entire country, “If I can forgive the man who imprisoned me, surely you can forgive your neighbors.”

He throws in some training-wheels lines to conservative readers about how George Washington and Thomas Jefferson would have approved of Mandela, etc etc, but whatever. It was a nice gesture from Gingrich to not let this fester.

Gingrich wasn't the only conservative to get a nasty reaction from Real Conservative quarters on the Mandela issue. (And no, we're not saying all conservative Facebook commenters think Mandela is the commie terrorist devil; just like... a lot of them.) Ted Cruz, Marco Rubio, and Eric Cantor have also been attacked as terror-suckling reds for their kind words about Mandela. Cruz may be the greatest traitor of them all: he will be attending Mandela's memorial service in South Africa on Tuesday. It would be funny if that knocked him out of contention for the 2016 Republican nomination, though it wouldn't be at all. (It would.)