Will Ferrell: 2013's most overexposed star 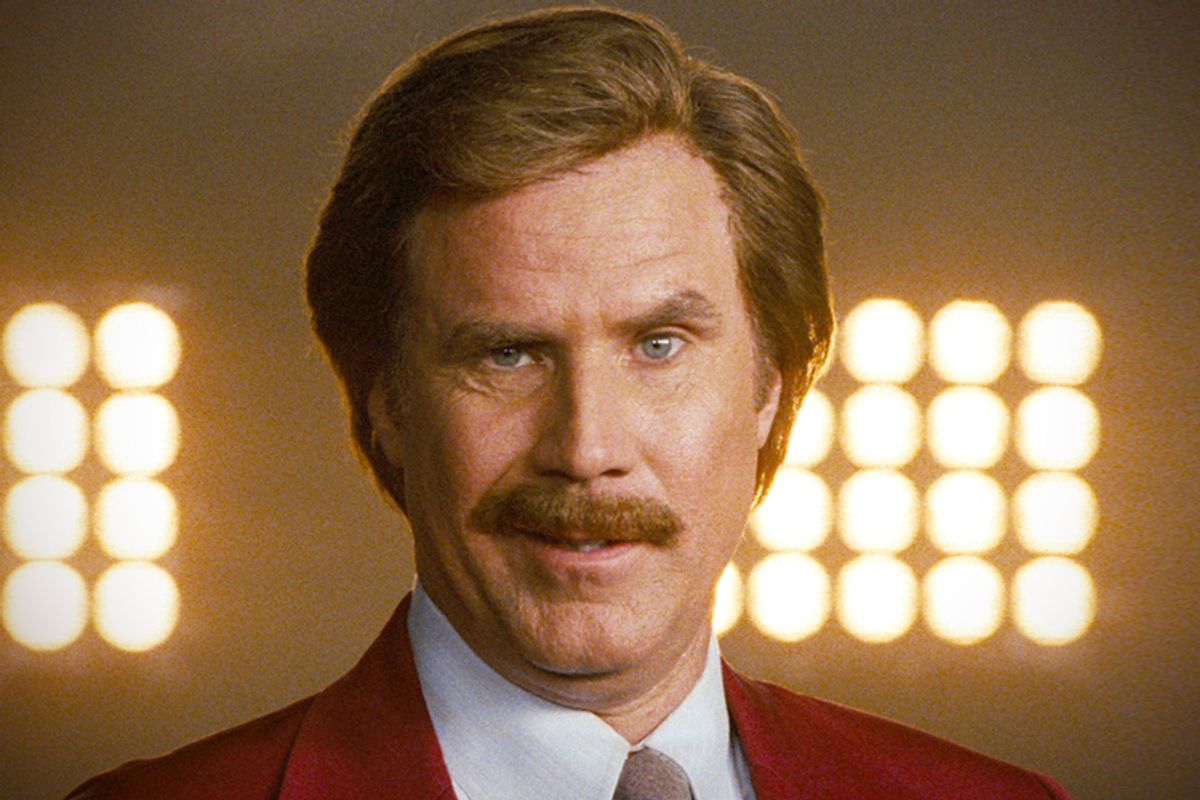 "Anchorman," released in 2004, was a modest success for Will Ferrell -- it grossed some $85 million in 2004. At the box office, the local-news comedy was dwarfed by 2003's "Elf" or 2006's "Talladega Nights." But those are mere statistics -- "Anchorman" protagonist Ron Burgundy may not have lit the world on fire on his first appearance, but over the years with continued DVD views, he became Ferrell's signature character. Indeed, Ferrell would seem less to be playing new characters in the years after 2004 than he was playing new shadings on Burgundy, a preening dolt confident in his masculinity but easily pushed to mania.

So it's no surprise that Ferrell reprised his most beloved character after years of alternating flops (2009's "Land of the Lost," for instance) with successes that failed to move the culture as much as did "Anchorman." But the "Anchorman 2" publicity strategy has begun to poison the well against the movie before its Dec. 18 release.

Some of it has been outside the filmmakers' control; the drumbeat of press coverage as the movie was shooting (cameos by Tina Fey, Amy Poehler, Kanye West, Jim Carrey!) took what might, possibly, have been fun surprises and made them feel like grindingly repetitive pieces of showbiz news. But the promotional team has lately taken it upon themselves to ensure that Ron Burgundy is, wearingly, everywhere. The fact that "Burgundy's" appearance on "SportsCenter" was canceled didn't keep Ferrell from appearing, in character, on a local newscast, at a panel discussion on journalism, at in-person appearances, in a taped interview with Peyton Manning and in ads for Dodge. Then there's the would-be "viral" video whereby CNN promoted itself by promoting a movie about a fake anchor. Ferrell was himself on this weekend's "Saturday Night Live," but it still felt like just the latest in a shock-and-awe press campaign that's giving away a bit too much.

Because here's the thing: Burgundy's aphorisms are not particularly funny completely devoid of context. "Anchorman" is suffused with period detail and a wacky plot. Will Ferrell telling Peyton Manning "You look like a succulent baby lamb" means nothing other than itself; it's a closed circuit referring to nothing other than the fact that Ferrell would like "Anchorman 2" to be successful. More and more, he looks like a performer straining to come up with an aphorism with staying power. Ron Burgundy's whole shtick is overconfidence; a quickie 224-page book in "his" voice couldn't seem more desperate.

This Christmas season is unusually crowded, with new releases including Ben Stiller's "Secret Life of Walter Mitty," Jennifer Lawrence's "American Hustle," Leonardo DiCaprio's "Wolf of Wall Street," and another "Hobbit" sequel. But none of those movies have taken quite the adversarial approach "Anchorman" has; their stars are trying to promote their work, not wear the public into submission. It's particularly strange because "Anchorman 2" has by far the most built-in appeal of any of the Christmas movies, given its status as a sequel to a film that wasn't widely derided (a core group of fanatics will see the second "Hobbit," but who else?).

Will Ferrell, in his "SNL" days and on film, is the consummate comedian; he'll go as far as he can to please his audience, and there's no doubt that the "Anchorman 2" team is happy to go along. What movie studio wouldn't want a star willing to go all out to promote a movie, when so many stars drag their feet about doing press or appearances? But there are limits to the public's patience. Ron Burgundy may come to seem, with every unexpected appearance on TV, like the sort of star we wish had been left in the 2000s.