The invisible hand waves bye-bye to Eddie Lampert, whose business plan has run Sears into the ground 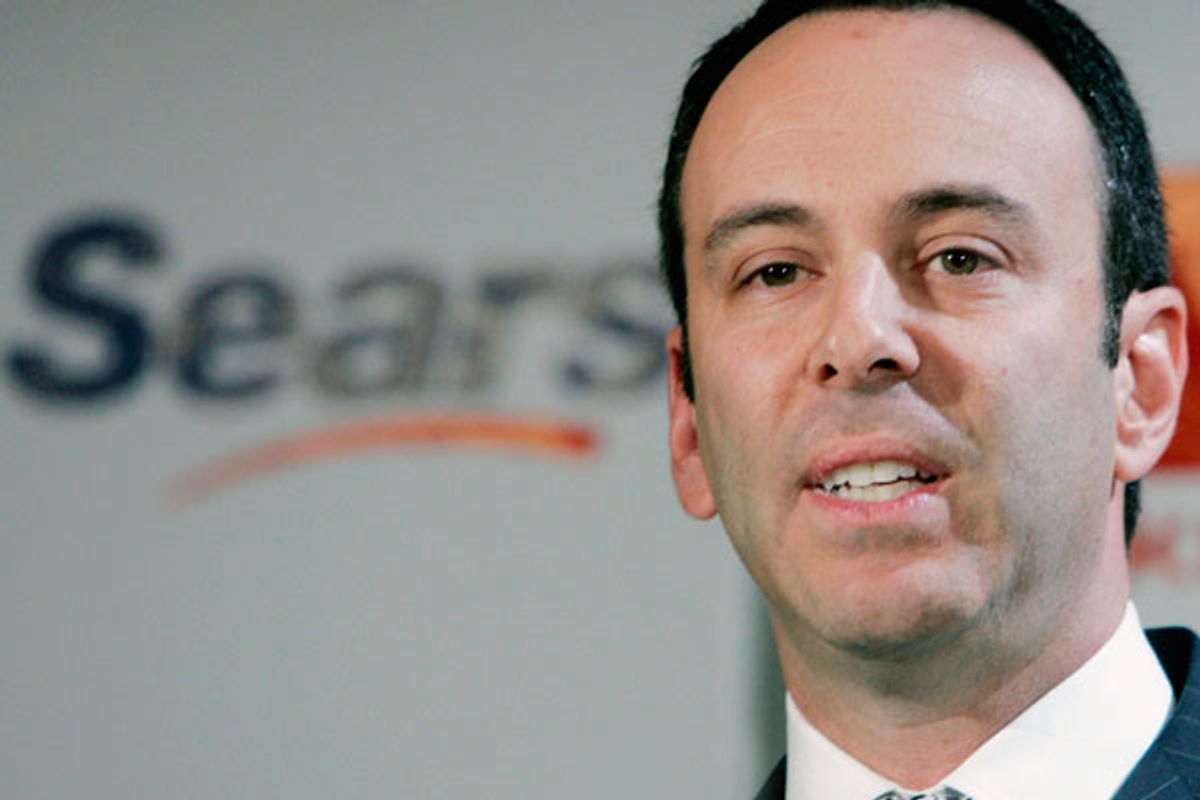 Once upon a time, hedge fund manager Eddie Lampert was living a Wall Street fairy tale. His fairy godmother was Ayn Rand, the dashing diva of free-market ideology whose quirky economic notions would transform him into a glamorous business hero.

For a while, it seemed to work like a charm. Pundits called him the “Steve Jobs of the investment world.” The new Warren Buffett. By 2006 he was flying high, the richest man in Connecticut, managing over $15 billion thorough his hedge fund, ESL Investments.

Stoked by his Wall Street success, Lampert plunged headlong into the retail world. Undaunted by his lack of industry experience and hailed a genius, Lampert boldly pushed to merge Kmart and Sears with a layoff and cost-cutting strategy that would, he promised, send profits into the stratosphere. Meanwhile the hotshot threw cash around like an oil sheikh, buying a $40 million pad in Florida’s Biscayne Bay, a record even for that star-studded county.

Fast-forward to 2013: The fairy tale has become a nightmare.

Lampert is now known as one of the worst CEOs in America — the man who flushed Sears down the toilet with his demented management style and harebrained approach to retail. Sears stock is tanking. His hedge fun is down 40 percent, and the business press has turned from praising Lampert’s genius towatching gleefully as his ship sinks. Investors are running from “Crazy Eddie” like the plague.

That’s what happens when Ayn Rand is the basis for your business plan.

Crazy Eddie has been one of America’s most vocal advocates of discredited free-market economics, so obsessed with Ayn Rand he could rattle off memorized passages of her novels. As Mina Kimes explained in a fascinating profile in Bloomberg Businessweek, Lampert took the myth that humans perform best when acting selfishly as gospel, pitting Sears company managers against each other in a kind of Lord of the Flies death match. This, he believed, would cause them to act rationally and boost performance.

If you think that sounds batshit crazy, congratulations. You understand more than most of America’s business school graduates.

Instead of enhancing Sears’ bottom line, the heads of various divisions began to undermine each other and fight tooth and claw for the profits of their individual fiefdoms at the expense of the overall brand. By this time Crazy Eddie was completely in thrall to his own bloated ego, and fancied he could bend underlings to his will by putting them through humiliating rituals, like annual conference calls in which unit managers were forced to bow and scrape for money and resources. But the chaos only grew.

Lampert took to hiding behind a pen name and spying on and goading employees through an internal social network. He became obsessed with technology, wasting resources on developing apps as Sears’ physical stores became dilapidated and filthy. Instead of investing in workers and developing useful products, he sold off valuable real estate, shuttered stores, and engineered stock buybacks in order to manipulate stock prices and line his own pockets.

Eddie’s crazy didn’t stop there. As a Wall Street creature fantastically out of touch with the kind of ordinary folks who shop at Sears, he inserted his love of luxury into the mix, trying to sell Rolex watches and $4,400 designer handbagsthrough America’s iconic budget-friendly brand.

As his company was descending into Randian mayhem, Lampert continued to cheerfully inform stockholders that his revolutionary ideas would soon produce earth-shattering results. Reality: Sears has lost half its value in five years. Since 2010, Sears has closed more than half of its stores. Sears Holdings is financially distressed and Lampert’s own hedge fund has reduced its stake in the company. The Sears store in Oakland, California, open for business with boarded-up windows, has even been cited for urban blight.

Truth be told, hedge fund honchos have had little to fear from royally screwing companies. Bank accounts fattened at the expense of workers and other stakeholders, they go on their merry way to mess up something else. But the epic incompetence of guys like Lampert may be dispelling the myth that financiers are the smartest guys in the room. Research suggests that not only do hedge fund managers typically understand squat about running a company, they’re often not much good at beating the stock market, either. A recent Bloomberg article points out that in 2013, hedge funds returned 7.1 percent. That doesn’t sound so bad, until you consider that if you had just stuck your money in the Standard & Poor’s 500 Index you would have seen returns of 29.1 percent. Big difference!

While Lampert was caught up in Randian delusions of crass materialism and cut-throat capitalism, he failed to realize that a business is an experience as much communal as it is individual. Employees are not just competitive beings — they benefit from cooperating with each other and perform better when they are respected, rather than beaten down and driven by fear.

Slowly but surely, Ayn Rand’s economic theories are being discarded because they simply don’t add up in the real world. Even Rand acolyte Paul Ryan (R-Wis) is now distancing himself, calling his well-documented enthusiasm an “urban legend.”

Lampert created a business model predicated on the notion that the invisible hand of the market would magically drive stellar results. With his belief in economic fairy tales, he managed to kill the goose that laid his own golden egg.