The cruel choice black women face: Between education and safety

Going to school in America hasn't gotten much safer for black girls and women since 1960. We deserve better 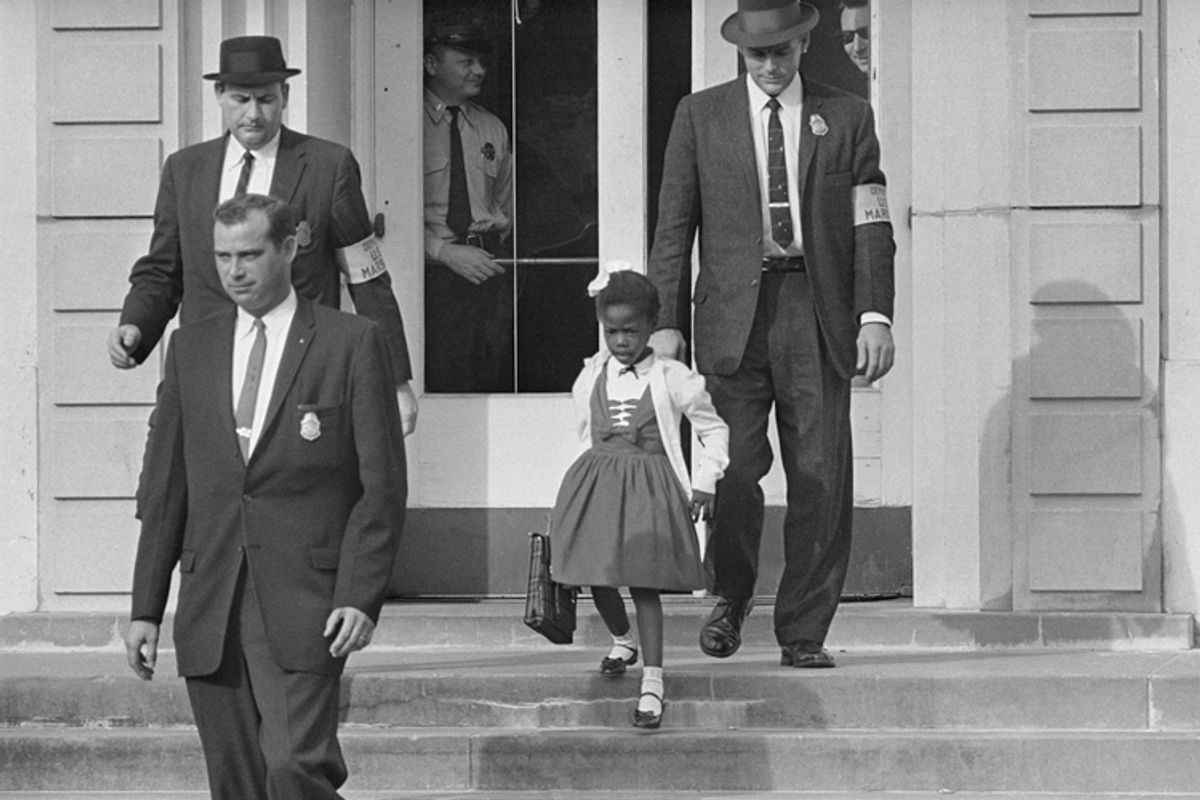 This past week, while editing my 96-year-old grandmother’s memoirs with my father, I learned that the one thing my great-grandmother did not want was for her daughter — my grandmother — to go to school. When the elders of their tiny Ugandan village came through the grass to ask my great-grandmother permission, she said, “Absolutely not.”

In the United States, in 1887, Sophia B. Packard and Harriet E. Giles founded the Atlanta Baptist Female Seminary in the basement of their church. Known today as Spelman College, the school was the labor of black mothers desperate to keep their daughters safe from the socially sanctioned rape by white men, the all-white law enforcement and all-white juries that would never arrest or convict the white rapists of their crimes. For these black parents, powerless in post-slavery apartheid America, founding religious convent schools and sequestering their daughters within them — education — was the only way to keep their daughters safe from sexual assault and the murder that often followed.

In November 1960, less than 30 years after the death of the last recorded African kidnapped into the transatlantic slave trade to America, 7-year-old Ruby Bridges was sent to an all-white school in New Orleans as part of the first civil rights era desegregation efforts. Spat upon, jeered at and threatened, Ruby was accompanied each day by police escort for her safety. Not a single one of her white classmates spoke to her; instead, their parents stood outside with the hating crowd and invited their children — Ruby’s peers — to stand beside them and threaten her with death after the bell rang and classes were dismissed for the afternoon.

In 1998, a scant few decades later, when I accepted my full merit scholarship to an all-white university, I did not realize that the parents of my peers were the ones who would have wanted nothing to do with Ruby Bridges in that classroom had they been living in New Orleans — that the grandparents of my peers were the ones who would have been standing outside in the hating mob, hurling spitbombs and death threats. Naive and gullible, despite being beaten up several times just for being black in my all-white and all-Asian schools, I had still drunk the Kool-Aid of post-racism, post-sexism America served from kindergarten to senior year of high school. And, as a first-generation American, I did not have any other cultural context outside my books to teach me to know any better.

And so, during those four long years at university when my all-white peers made racist jokes or racist projects — when they had to rescind invitations or stop associating with me altogether because their parents didn’t think it was a good idea to get too close to “those black people,” I thought there was something wrong with me instead. And, after four years of being the only black girl in my major, I crumbled under the pressure. I began to believe my peers and professors when they said no one would want to read my stories because I was black, that I was worthless and untalented and stupid because I was black. I thought it was my fault when I was made a target for sexual assault by white male “friends” fulfilling fraternity pledge dares or just out for fun because they thought I had no value because I was black — exactly what those mothers in Atlanta, Ga., in 1887 had tried to save their daughters from by sending them to school. Exactly what my great-grandmother had feared would happen to her daughter if she sent her to school. Exactly what the policeman was there each day to prevent from happening to Ruby Bridges.

A great many studies, such as this one from the American Psychology Association, have revealed the damaging psychological effects of being the “only one” at all-white universities for African-American students. Other studies have shown how much easier it is for black boys than black girls at all-white schools, how the racism and discrimination that black boys experience is less harmful than that experienced by black girls because their blackness is equated with a hip coolness and envied masculinity rather than the prejudice and discrimination layered onto ours.

But the point is not that we black girls should opt out of education altogether or still be sequestered to our Spelman University convent schools or for our safety, fellowship and support -- although it would have been nice to have some sisterhood.  That is partly my fault. I should have been more proactive to get to downtown Chicago and find spaces of community with other African-American women to empower me during those four years at my all-white university. But it was difficult to find the time — what with working two jobs to pay for the extra expenses my scholarship didn’t cover and trying to study as much as possible to make the grades, to make the hard work worth it.

The economic disparity minority students face at wealthy white schools (where peers are unaware of the socioeconomic gap or ignore us because of it) has been documented in the recent films "Allowed to Attend" and "The Prep School Negro" as well as Jenny Anderson’s New York Times article “Admitted But Left Out.” And so the point also is: Why should I have to do that? Why couldn't the university allow more people who looked like me on its elite campus so there would be safety in numbers, rather than admitting us in numbers small enough to give our white peers just a taste of diversity, to let them feel like their whiteness still reigned supreme? Why was it not important for the university to be a safe space for people like me, not just people like them?

And yes, there are men and women of color who make the grades. And no, it is not just because of affirmative action, as all my white peers told me snidely during those long four years. And yes, there would be more of us present on campus if the price tag were not so out of reach for those of us who do make the grade to get in.

The point is that we women of color should be able to be safe and get our education at the university of our choice — especially if that university has the best program to which we are applying or the best financial aid package for a limited wallet. The point is that we should not have to choose between safety and education as my great-grandmother and grandmother had to do, as girls like Malala Yousefazi are still forced to do in so many other parts of the world. Because education is empowerment. Education is the ability to understand yourself and the world around you. And once you understand how to think and how to express that thinking, you are truly free.

My grandmother is now 96 years old. It has been almost a century since her mother, my great-grandmother, kept her from school to save her life. And now that I have a child, I am faced with the same decisions. I know that keeping my child safe, healthy and happy is my first priority as a parent. And I do not want to be faced with the same decision that my great-grandmother faced, nearly 100 years later and in a different country.

And so I ask: How can we guarantee not just education, but a safe education for all?

Hope Wabuke is a mom and writer who runs a communications company called The Writesmiths. She is also Director of Media and Communications for the Kimbilio Center for African American Fiction and a blogger for Ms. Magazine. Follow her @HopeWabuke