Depressed? Climate change could be to blame 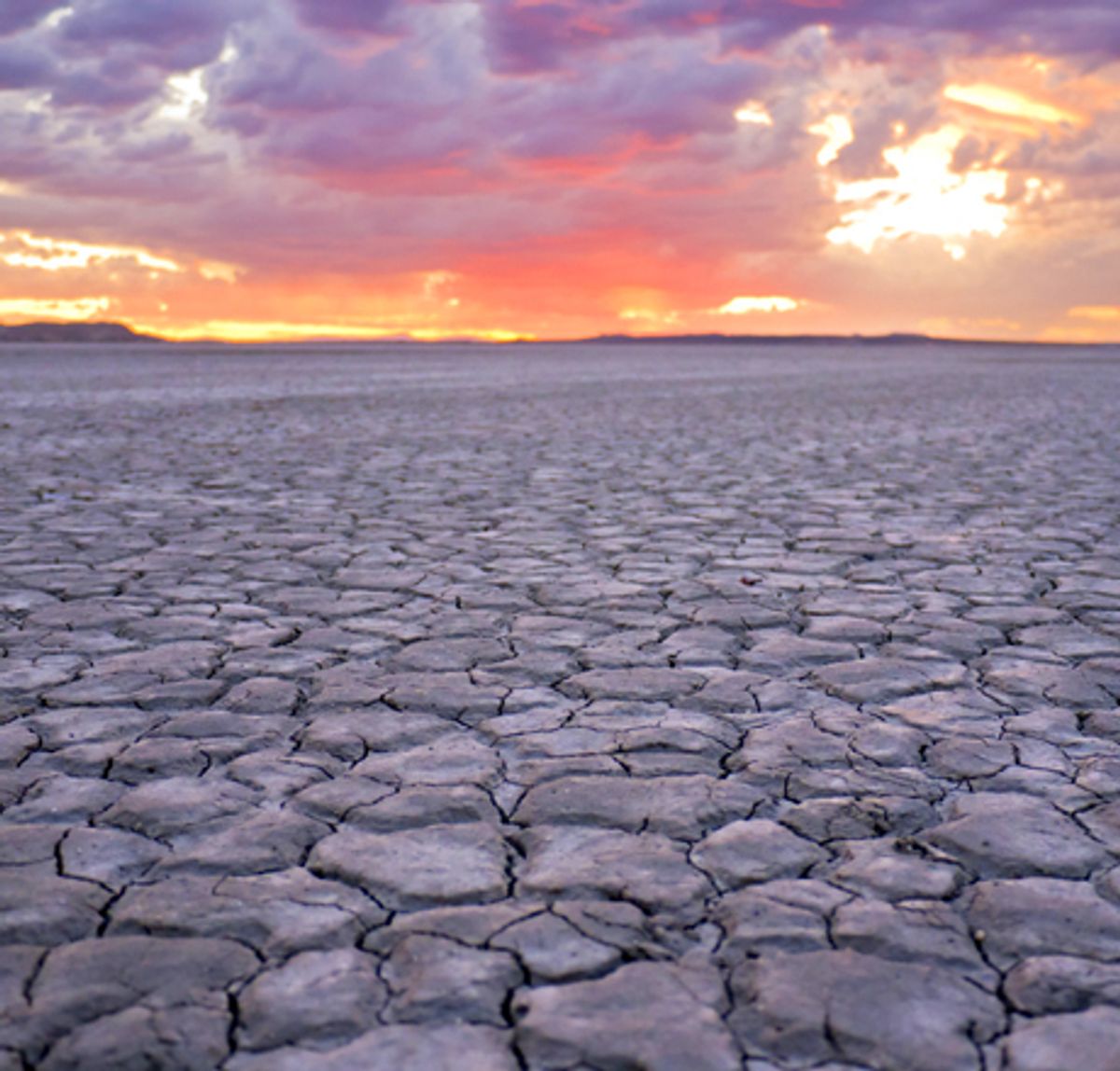 Sometimes the smell of Skidoo exhaust makes Melva Williams yearn for the winters of her childhood, when cross-country journeys began in the darkness of early morning, layers and layers of clothing kept the intense cold out, and the ice was so thick people rarely worried about plunging through it. A few years ago, Williams and her husband found themselves unable to traverse Labrador's frozen wilderness after an unusually warm winter left the ice too thin to support their snowmobile.

Now she wonders whether "there may be a time when the weather conditions change so drastically that we cannot safely travel on the ice" at all. Each mild winter Williams experiences -- and lately there have been a lot of them -- brings her closer to that "heartbreaking" reality. "To be a part of a culture and a people that has a necessary connection to nature and the outdoors and is used to living in a certain way -- to see that slipping away is scary," shelamented in a video posted to YouTube.

Her fears may seem anachronistic in a highly modern Western culture that's never felt so detached from the physical world. Our generation venerates the self-inventing tech entrepreneurs building a "new economy" unbound by traditional notions of place or time. We spawned a transglobal class of plutocrats that calls no country home. Yet an emerging body of mental health research suggests we may share more in common with people like Williams than most of us imagine.

"We've totally misunderstood our connection to the natural world," said Ashlee Cunsolo Willox, a Canada Research Chair at Cape Breton University who's helping lead first ever studies that measure how rising global temperatures affect the mental well-being of Canada's Inuit. One of her biggest takeaways: that human identity is inextricably tied to the natural world. As climate change alters that world in profound and unexpected ways, she told The Tyee, "very few people are going to be untouched."

'A caged in animal'

Few people know more about life on a warmer planet than the Inuit of Canada's Nunatsiavut region, a vast Arctic wilderness in northern Labrador. The five Inuit communities nestled into the region's coastal inlets can be reached only by snowmobile or floatplane during the winter. They're still far enough below tree line to be fringed by black spruce forest. "In many ways, they have also experienced warming and changes at a faster rate than Inuit communities higher in Canada's North," Cunsolo Willox said.

Four years ago, she joined a team of researchers working with the town of Rigolet, and first visited during the mildest winter any of its 310 residents could remember. The annual sea ice freeze-up came two months later than usual, and left about two months early. Even while it lasted, the sharp and choppy conditions made snowmobile travel riskier. "In the back of my mind I'm thinking 'I hope the ice is safe, I hope we're okay,'" one woman explained. "Which is something we never ever had to think about before."

Unable to hunt, fish, trap and forage, Rigolet's residents spent months indoors. They felt bored. Many became restless and depressed. "When I don't get out on the land," one resident explained to the researchers, "I'm like a caged in animal. I really can't relax properly." Cunsolo Willox's team had come to Rigolet to study how warmer weather affected the community's overall health. Researchers soon realized the biggest impacts were occurring inside people's heads. "I can't imagine how life would be if I couldn't travel in the winter," Williams lamented.

Others described the milder weather of recent years as "devastating," "depressing," "frustrating," "sad," "scary," "worrisome," and "extremely stressful," according to a summaryof Cunsolo Willox's research published this fall. For some of Rigolet's seniors and elders, the mental impact was existential. "The place has changed so much around them," Cunsolo Willox said, "that they no longer feel at home."

A new type of sadness

Halfway across the planet, a similar type of mental anguish had been observed among people living in the drought-stricken Upper Hunter region of eastern Australia. For decades they had seen their landscape transformed by open-pit coal mines, power plant pollution and a drier, less predictable climate. Some suffered "from a form of chronic distress," wroteGlenn Albrecht, a researcher who studied the region. "Their relationship to their home environment had turned bad."

Albrecht coined an influential new term to describe the particular type of sadness he witnessed in the Upper Hunter: "solastalgia." "The homesickness you have when you are still at home," is how he defined it. Researchers have since documented solastalgia among the older indigenous women known as "Aunties" on Australia's Erub Island, and most recently in the cold and isolated Nunatsiavut towns of northern Canada. "[Albrecht's] concept is very, very relevant," Cunsolo Willox said.

Her team found that solastalgia seemed to affect Rigolet's oldest residents most. Like Inuit all across Canada's north, they'd lived through six decades of traumatic change. They'd been forced off their traditional lands, sent away to residential boarding schools and assimilated into a Western culture bearing little resemblance to their own. Now they couldn't depend on an annual sea ice freeze-up to provide structure to their lives. "And that's almost worse," Cunsolo Willox said.

Denied the opportunity to hunt for caribou, to visit winter cabins in the woods, to leave town on Skidoos in the pitch black of early morning, Rigolet residents young and old found it harder to deal with traumatic events from the past. "When people are unable to spend time on the land," one local health worker explained to researchers, "they have more time to dwell on the negative, to remember things like residential schools experiences when they felt really trapped and unable to leave."

Being trapped indoors made some people feel cut off from themselves and their identities. "It's like taking part of your arm away," one man said. "There is just really something missing." Cunsolo Willox's team heard variations of this statement over and over again: that people physically identified with the natural world surrounding them. They didn't so much consider themselves as being from Nunatsiavut, as literally of it.

Despite the changes brought by a warming climate, more than two-thirds of those interviewed for the studies said they still loved the land they'd grown up in, and would not choose to leave it. "The land... defines who we are," one young mother told researchers. "It makes you, you."

That feeling may be hard for many North Americans to relate to. "In a world of cheap airfares, laptops, and the Internet, we proudly regard mobility as a sign of how advanced we are," tech writer Clive Thompson has argued. "Only losers get attached to their hometowns." In many ways, any sense that our identities might be "directly related to the ground we stand on," Cunsolo Willox said, "that we can feel our ancestors and our history through it, has been lost in many urban settings."

But just because we don't feel that connection doesn't mean it's gone. Our psyches may in fact remain deeply vulnerable to environmental change. After Hurricane Katrina, for instance, Harvard researchers found the rate of "serious mental illness" among survivors to be double that of the general population. Still, the mental impact of a warmer climate will likely be felt gradually. Look to Australia, where 25 per cent of kids "honestly believe [the world] will come to an end before they get older," one survey suggests.

These are glimpses into a disorienting future. "Although they cannot be described with certainty," the American Psychological Association predicts, global warming's effects on our emotional well-being "are likely to be profound." No need to explain that to Rigolet's Melva Williams, though, for whom Skidoo exhaust triggers memories of a simpler childhood. "Whenever the cold is just right, the wind is just right, I happen to smell that smell again, it brings me right back to those happy times," she said.